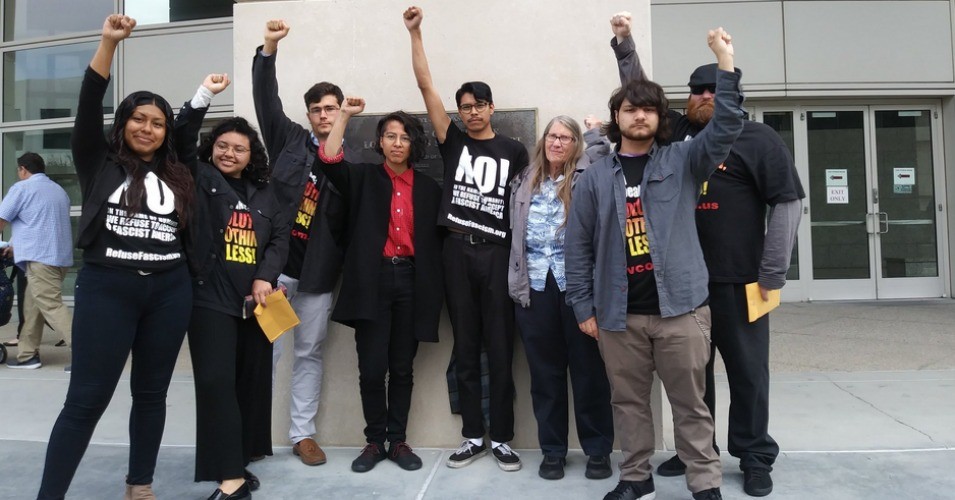 The quartet, members of the Revolution Club and Refuse Fascism LA, potentially face more than two years in prison. As Common Dreams reported at the time—with an article titled “After Being Told He’s ‘Full of Sh*t’ at School Event, Mnuchin Demands UCLA Suppress Video”—the group protested a talk Mnuchin gave at UCLA’s Burkle Center in February of last year.

The protesters spoke out against the Treasury secretary’s participation in passing President Donald Trump’s $1.5 trillion tax break for the wealthy and his support for sanctions against North Korea.

“[Mnuchin] is part of a regime that is hell-bent on consolidating fascism,” the group said at the demonstration. “Don’t stand aside.”

Watch this video! of @revclub_la confronting #Mnuchin at UCLA last year– with substance & truth.
Support and defend the #UCLA5 https://t.co/MSw0O5U5sB

The demonstrators remained in their seats during the demonstration, but UCLA accused them of “disturbing the peace” as well as resisting arrest and trespassing.

“Mnuchin was bragging about killing sanctions and their politics of cruelty, but we’re charged with ‘disturbing the peace’ for speaking loudly during his event!” Michelle Xai, one of the “UCLA 5” who took part in the protest, said in a statement. “These cases are criminalizing constitutionally protected protest and speech.”

The group says University of California police officers stalked them in the weeks after their protest, tracking their activities and license plates while they were engaged in “constitutionally protected political organizing.”

UCLA barred the demonstrators from the campus for seven days after Mnuchin’s event; the university says they violated the ban when they attended a vigil for undocumented immigrants and a talk given by government whistleblower Chelsea Manning shortly after Mnuchin’s appearance.

“While the Trump/Pence fascist regime threatens humanity, gutting the rule of law, stacking the courts with fascists, rounding up immigrants, consolidating a fascist America, many more need to be ‘disturbing the peace’ of fascist normalization,” Xai added. “To do so is righteous, necessary and just!”

The group took to social media over the weekend to ask for the support of all those who defend the right to free speech.

Despite claims from the university’s lawyers that the case is not a political one, Xai said, the trial is “about the suppression of speech during a time of consolidating fascism.”

(1/2) #UCLA5 Trial Update: Day 3
Jury has been selected, opening statements were heard.
What is this case REALLY about? Criminalization & Suppression of Protests at a time of Fascism!
Which Side Are YOU On? pic.twitter.com/LWAA37cle4

Mnuchin demanded that the university suppress video of the protest after the event. UCLA’s footage was made available only after the Society of Professional Journalists filed a public information request.

“This idea that a federal official can control access to the records that the public is entitled to under California law is troubling,” David Snyder, executive director of the First Amendment Coalition, told Buzzfeed at the time.

While they are being attacked by the justice system for exercising their First Amendment rights in defense of human rights and equality, the demonstrators argue, Mnuchin and the rest of the Trump administration are actively making it easier for extreme right-wingers to be heard.

“In March, Trump signed an Executive Order aimed at carving out more space for fascist speakers and giving backing to a movement of Nazi youth. University administrations are greasing the skids for fascism, spending millions protecting the free speech of fascists, while criminalizing ANTI-fascist protest and speech,” Revolution Club member Tala Deloria said in a statement. “Instead of saying NO, the universities are facilitating the suppression of dissent and normalizing a fascist remaking of the country.”