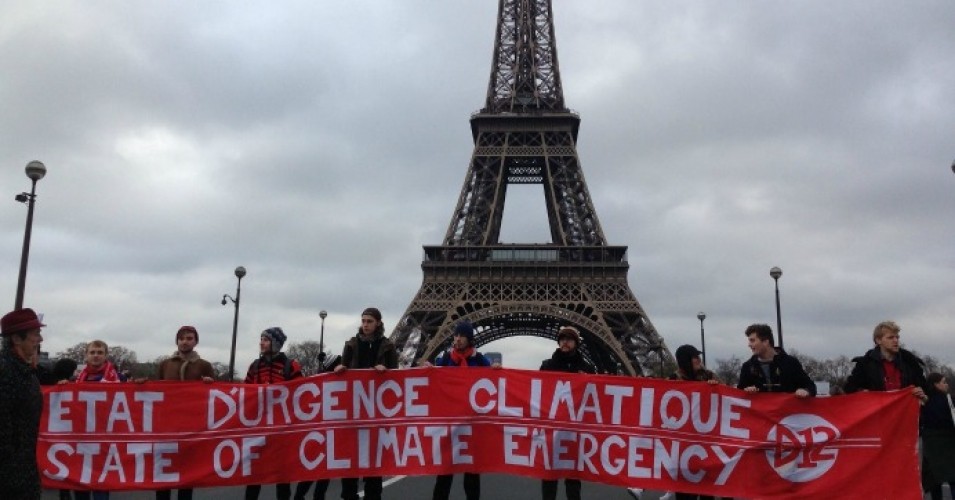 U.S. Secretary of State Mike Pompeo announced the move in a tweet Monday, the first day that world leaders could begin the one-year withdrawal process:

Today we begin the formal process of withdrawing from the Paris Agreement. The U.S. is proud of our record as a world leader in reducing all emissions, fostering resilience, growing our economy, and ensuring energy for our citizens. Ours is a realistic and pragmatic model.

In response, Alden Meyer, director of strategy and policy at the Union of Concerned Scientists (UCS) and a leading expert on the United Nations’ international climate negotiations process, warned that “President Trump’s decision to walk away from the Paris agreement is irresponsible and shortsighted. All too many people are already experiencing the costly and harmful impacts of climate change in the form of rising seas, more intense hurricanes and wildfires, and record-breaking temperatures.”

The primary goal of the Paris accord is to “strengthen the global response to the threat of climate change by keeping a global temperature rise this century well below 2 degrees Celsius above pre-industrial levels and to pursue efforts to limit the temperature increase even further to 1.5 degrees Celsius.”

Trump announced his intention to abandon the agreement, which was backed by the Obama administration, in a June 2017 speech. In the two years since, every nation on earth has pledged support for the accord, which went into effect on Nov. 4, 2016. No country was allowed to withdraw for three years.

The Trump administration was required to send a letter to the United Nations to begin the withdrawal process. U.S. State Department spokesperson James Dewey had told The Associated Press Friday that “the U.S. position with respect to the Paris agreement has not changed. The United States intends to withdraw from the Paris agreement.”

“The total retreat by President Trump and his administration in the global fight against climate change is the definition of betrayal,” declared Environmental Working Group president Ken Cook. “The U.S. and the world are rapidly running out of time to stave off the worst impacts of climate disruption, while the president is actively working to speed up our collision with the biggest existential threat facing every American.”

Ahead of the administration’s letter on Monday, Jean Su, energy director with the Center for Biological Diversity’s (CBD) Climate Law Institute, said in a statement that “Trump can run from the Paris agreement, but he can’t hide from the climate crisis.”

“The silver lining is, Trump’s Paris withdrawal will give the global community a break from his bullying support for fossil fuels,” said Su. “But the next president will need to rejoin the accord immediately and commit to the rapid, wholescale clean-energy transformation the climate emergency demands.”

The yearlong process means the U.S. withdrawal would take effect after the next presidential election—meaning that if someone other than Trump wins the White House in 2020, that president could return to the deal within 30 days.

“America is the number one historical contributor to the climate emergency wreaking havoc in burning California, the flooded Southeast, and the rest of the world,” Su added. “The next president must repay this extraordinary climate debt by rapidly moving America to 100 percent clean energy and financing the decarbonization of the Global South.”

Karen Orenstein, Friends of the Earth’s deputy director of economic policy, concurred in a statement Monday.

“World leaders must not wait for Trump, and must not use his moral bankruptcy as an excuse for inaction,” she said. “The rest of the world must implement the Paris agreement without the United States.”

“However, rich countries must take the threat caused by climate change far more seriously and make their mitigation and climate finance commitments commensurate with what climate science and justice demand,” Orenstein added. “When the U.S. has more sane leadership and rejoins the international community, the Paris agreement needs to be substantially more equitable and ambitious.”

With the administration’s withdrawal, “Donald Trump is sending a signal to the world that there will be no leadership from the U.S. federal government on the climate crisis—a catastrophic message in a moment of great urgency,” 350.org executive director May Boeve said Monday.

The group’s North America director, Tamara Toles O’Laughlin, said that “Trump is torching our future so fossil fuel billionaires can pull a profit while the rest of us pay the price.”

“When Trump first said he’d quit Paris, our message was for elected officials and decision-makers to pledge ‘we are still in,’ and double down on commitments for climate action,” she added. “That’s still our expectation of all global officials: to heed demands of the people for transformative climate action.”

Given the Trump administration’s intentions for this particular deal and broader record on climate issues, O’Laughlin emphasized the importance of state and city governments in the United States taking action “beyond the commitments of the Paris agreement,” which some activists and experts criticize for not being bold enough.

We need the United States to lead on climate action, but President Trump is ignoring climate science. Luckily, 25 governors in @USClimate are joining together to meet the goals of the Paris Climate Accords. #WeAreStillIn #ParisAgreement #ActOnClimate pic.twitter.com/bn5R7UzIon

Trump and his appointees have worked tirelessly to roll back and weaken key environmental and climate policies implemented by his predecessors. Meanwhile, said Boeve, “a majority of people in the United States understand the need to address this crisis head-on.”

“There’s dangerous regression from the Trump administration,” she explained, “but there is plenty of leadership everywhere else: young people leading with great courage; the 7.6 million people who joined the Global Climate Strikes; wise investors shifting trillions of dollars out of coal, oil, gas companies; liability in courtrooms, and tribunals as the likes of Exxon are called to pay for the harm they’ve caused; and more. The moral outrage at this decision will be a powerful catalyst for action.”

Youth-led climate strikes in September bookended the U.N. Climate Action Summit in New York City. Campaigners are organizing another pair of strikes for Nov. 29 and Dec. 6, timed to line up with COP25. At the global climate conference—which was recently moved from Santiago, Chile to Madrid, Spain—world leaders will discuss their commitments under the Paris accord.

Katie Eder is the 19-year-old executive director of Future Coalition, one of the youth groups involved with planning the climate strikes.

“Trump has made it clear that he is going to continue to put the wants of large corporations and fossil fuel executives above the lives and futures of our generation,” Eder said Monday. “We’re asking that elected officials at all levels maintain commitments to the Paris climate agreement and end the fossil fuel era once and for all. We will continue to strike, rally, and march so that elected officials hear that message. And come November, if they don’t listen, we are prepared to vote them out.”

“The demand for climate action cannot be ignored, and Trump’s neglect of the will of the people won’t change that,” concluded Toles O’Laughlin of 350.org. “Beyond the Paris climate agreement, we’re not going to stop until we get a Green New Deal that ends fossil fuels and makes the industry pay for care and repair, prioritizing frontline communities and workers in the transition.”

Meyer of UCS noted that “fortunately, no other country is following President Trump out the door on Paris, and here at home, states, cities, and businesses representing more than half of the U.S. GDP and population have committed to take action to meet the Paris agreement’s goals.”

“Unlike the president,” he said, “these leaders understand that reducing emissions creates jobs and protects local communities, while it is inaction on climate that poses the real threat to prosperity.”