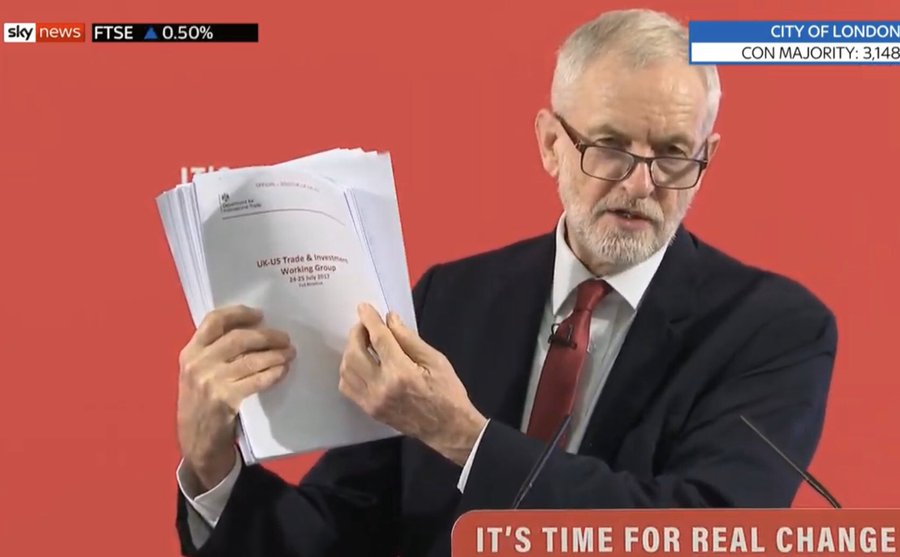 During a press conference, Corbyn said the Trump administration’s negotiators are “demanding” that the NHS be put “on the table” in talks over a possible post-Brexit trade pact between the U.S. and U.K.

“That could lead to runaway privatization of our health service,” said Corbyn. “Mega-corporations see Johnson’s alliance with Trump as a chance to make billions from the illness and sickness of people in this country. And if the Conservatives have their way and this deal goes forward, the changes I’ve revealed will be almost irreversible.”

Corbyn said the official documents discredit Johnson’s insistence that the NHS is not on the table in the trade negotiations with the Trump White House.

“These uncensored documents leave Boris Johnson’s denials in absolute tatters,” Corbyn said. “Voters need to ask themselves some very serious questions. Is the NHS safe in Boris Johnson’s hands? We’ve now got evidence that under Boris Johnson, the NHS is on the table and will be up for sale. They tried to cover it up. Their secret agenda today is exposed.”

Corbyn’s press conference came just weeks after the U.K.’s Channel 4—citing anonymous sources with knowledge of the ongoing trade negotiations—reported that the “U.S. government and its powerful pharmaceutical industry want the NHS to pay more for their medicines which are much more expensive across the Atlantic.”

“They want to remove the U.K.’s ability to block American drugs not deemed ‘value for money’ and restrict our powers to allow cheaper alternatives to be prescribed to patients which save the NHS hundreds of millions of pounds a year,” Channel 4 reported.

Nick Dearden, director of U.K.-based advocacy group Global Justice Now, said in a statement that the documents obtained by the Labour Party “clearly show the British negotiators being bullied by Trump’s administration, and Boris Johnson dancing to the tune of U.S. big business.”

“The U.S. is demanding damaging changes to the British economy which threaten our public services like the NHS, our food standards and farmer livelihoods, our access to new cancer medicines, and our ability to tackle climate change,” said Dearden. “U.S. officials are damning about parliamentary scrutiny over safety standards and are even trying to dictate what positions Britain can take in international fora.”

Johnson has repeatedly denied that the NHS is on the chopping block. “Our NHS will never be for sale,” the British prime minister tweeted earlier this month.

“This did not age well,” Corbyn said of Johnson’s tweet following the press conference Wednesday.

This did not age well. https://t.co/a2OMUsUvDW

“So for the want of any doubt, let me give this reassurance,” Corbyn said Wednesday. “Labour will never ever treat our NHS as a bargaining chip in trade talks with anybody. We will never let Donald Trump get his hands on our NHS. Because our NHS is not for sale.”

Editors’ note: As of the beginning of August, the healthcare industry had contributed more than $5 million to the various 2020 presidential candidates’ campaigns. Things that make you go hmmm…