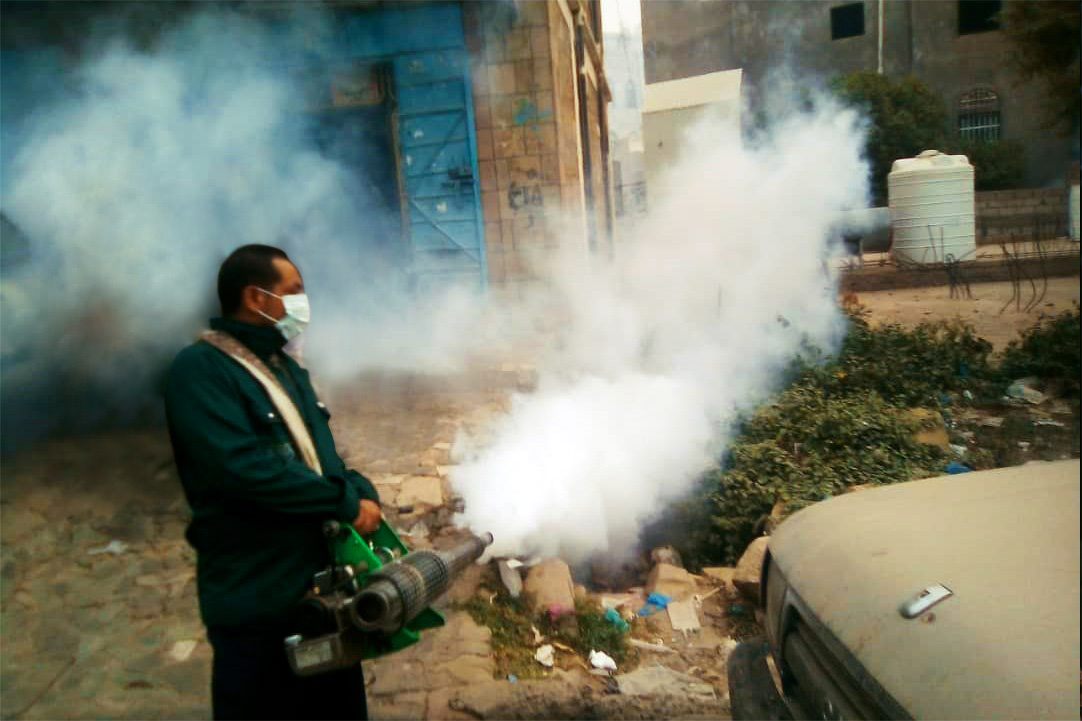 Yemeni activist Aseel Sweid told MintPress News how a young boy, Abdulkarim al-Ma’amari, “died of dengue fever after it spread with alarming speed in Taiz, threatening many innocents.” Sweid added that three of his own brothers had been infected with dengue. “There are a huge amount of people with the fever in the same hospital [as my brothers].”

Dr. Adam al-Jaidi, a doctor at the Jomhouri Governmental Hospital in Taiz, where Sweid’s brothers are being treated, said that the viral fever is sweeping the province and hundreds of cases are being seen in local hospitals, dozens of them with serious complications. Medical staff at Jomhouri confirmed that most of the patients they have received are infected with dengue fever.

A new wave of epidemic diseases, including dengue fever and malaria, have spiraled out of control in Yemen, particularly in the coastal areas that are traditional Houthi strongholds. In Taiz, 270 km south of the capital Sana’a, in Hodeida, as well as in rural mountainous areas,  H1N1, known commonly as the swine flu, is also making a resurgence.

In addition to dengue and H1N1, Yemen has the fastest-growing cholera outbreak ever recorded; and rabies, diphtheria, and measles have now emerged in the country, killing countless people all while Yemen is in the midst of the world’s worst famine.

Moreover, years of Saudi attacks on water treatment facilities and other civilian infrastructure have left Yemenis to eke out an existence in an environment rife with deadly diseases that have emerged in a nation caught between a crippling Saudi blockade and aid organizations that are unwilling, or unable, to meet the growing needs of the war-torn country.

Yemen’s Sana’a-based Minister of Health said that one million patients have confirmed or suspected cases of malaria and that there are currently 36,000 confirmed cases of dengue fever with at least dozens of those cases proving fatal. However, those figures represent only the regions controlled by the Houthi-led government in Sana’a, figures for the whole country could be much higher.

In the wake of the new epidemics, Yemen’s Minister of Health announced a state of emergency citing the spread of dengue fever, malaria, and mosquito vectors and adding that most of the diseases and epidemics are being transmitted from areas controlled by the Saudi-led coalition.

The World Health Organization (WHO) has received more than 78,000 disease reports in Yemen since the beginning of 2019. The organization receives that data through 1,991 surveillance sites that electronically monitor and report deadly epidemic diseases such as cholera, dengue, other viral hemorrhagic fevers, measles, whooping cough, and polio.

In 2019, 78,11 disease reports were received through WHO surveillance sites. The WHO had only 400 surveillance sites established at the beginning of the Saudi-led war in 2015, those sites recorded only 16 diseases at the time.

Dengue fever is a painful disease that is most often mosquito-borne. It is related to the same viruses that cause West Nile infection and yellow fever. Mosquitoes thrive in areas in Hodeida and Taiz including in puddles, water tanks, containers, and old tires. A Saudi freeze on Yemen’s Central Bank means that the government in Houthi-controlled areas is unable to pay municipal workers.  This has left a lack of reliable sanitation and has infrastructure, such as sewage systems, in woeful need of maintenance and repair, creating an ideal environment for the spread of infectious diseases.

Yemen’s children are the hardest hit

While the ongoing war has had an irreversible effect on all Yemenis, children have been hit the hardest. The spokesman for Yemen’s Sana’a-based Ministry of Health, Dr. Yousef al-Hadri, said 100,00 people die every year in Yemen as a result of the diseases and epidemics, most of them children.

Adding to the strain on Yemen’s already vulnerable population, Dr. al- Hadri pointed out that 2.9 million children under five are malnourished, 55 percent of them suffering from acute malnutrition.

The Ministry of Health blames the reoccurrence of deadly bacterial and viral outbreaks on the Saudi use of internationally banned weapons that the Kingdom has purchased mainly from the United States, saying that its experts have not ruled out the possibility that the recent spread of epidemics may be the direct result of an intentional biological war waged by Saudi-led coalition. The Ministry has called for an international investigation to find the reasons behind the spread of this year’s unprecedented wave of dengue fever.

“I lost my friend Tuesday because of dengue, today, I came here to ask the U.S. to please stop the spread of diseases in my home, I don’t want to lose more friends or family anymore,”13-year-old Samerah Abdullah said, as she and dozens of children came together to mark World Children’s Day. The children gathered in front of the International Child Welfare Organization chanting slogans against the use of hunger and disease as a weapon of war and calling on the United States to take steps to put an end to the deadly war on their country.” We have been killed by epidemics and diseases that were brought by U.S. weapons,” she added.

A biological weapon of war

While Saudi Arabia is, without a doubt, the main culprit behind the unprecedented catastrophe now unfolding in Yemen, its most prominent ally – the United States – has not only aided the Saudis, but has taken an increasingly direct role in the war, including, according to Yemeni civilians who spoke to MintPress, creating the circumstances that have led to the spread of so many diseases in Yemen.

Given the fact that epidemics have decimated several powerful armies and civilizations throughout history, it is not far-fetched to believe that the Saudi-led Coalition would intentionally use them to defeat their enemies in Yemen, especially after their bloody five-year-old military campaign has netted them little more than a stalemate.

The association between wars and dengue virus transmission is well-recognized. During World War II, military personnel and refugees alike were infected by dengue and thousands of American troops were killed by the fever. This is what is happening in Yemen, however, these epidemics are occurring in an era where antibiotics are readily available, but unable to reach Yemen’s population due to the Saudi-led coalition preventing them from entering the country.

What’s happening in Yemen may not be literal biological warfare, but it is certainly biological warfare by other means. The Coalition has destroyed vital infrastructure across the whole of Yemen, including water pumps, electric generators, and solar energy systems, leaving residents – including internally displaced families – without access to clean drinking water.

While epidemics are normally treated easily and inexpensively, the ongoing blockade and bombing of civilian infrastructure, particularly hospitals, have crippled the country’s health system, leaving the government unable to respond to the epidemic. Since March 2015, when the war began, more than 450 health facilities have been damaged or destroyed. Most of the country’s estimated 300 remaining health facilities are either closed or barely functioning.

Furthermore, medical treatment and supplies have become increasingly difficult to come by since the Saudi-led coalition forced the closure of the Sana’a International Airport in August 2016, effectively choking off the supply of life-saving medicine.

According to the Supreme Authority for Pharmacy and Medical Supplies, at least 120 types of medicines for chronic diseases are no longer available in the country. In addition, the price of medicine has skyrocketed due to the increased cost of freight.

Drugs imports have decreased by 60 percent and dozens of drugs are now almost nonexistent since the closure of Sana’a airport, most of them life-saving drugs including hormonal drugs, immunosuppressants, blood coagulant, serotonin, blood clotting agents, CPR and anesthesia drugs and some laboratory and diagnostic solutions.

On Tuesday, the National Diabetes Center (NDC) launched a distress call to respond to 30,000 registered cases of the disease as a result of a lack of resources and a scarcity of drugs due to the blockade.

The lack of medicine and treatment facilities have effectively made epidemics incurable during the war. Many, which are parasitic in nature, have been made worse by unsanitary living conditions, malnutrition as well as a chronic shortage of fuel, prolonged electricity outages, and a near-total collapse of the health system.

The spread and severity of the outbreaks have also been affected by a compromised immune system response among Yemen’s population caused by widespread famine. Nearly 18 million people do not have enough food to eat, and the malnourished are even more susceptible to disease.

Today, more than 12 million children, nearly every child in Yemen, are in need of urgent humanitarian assistance according to UNICEF. The organization added that “the continuation of the bloody conflict and the resulting economic crisis has put basic social services systems across Yemen on the brink of collapse, with far-reaching consequences for children.”

The deliberate targeting and attacks on the country’s healthcare facilities have only made matters worse, not only contributing to antibiotic resistance but effectively weaponizing disease and other contagious illnesses. The Saudi-led coalition has even carried out airstrikes on large congregations of patients seeking treatment in poorly equipped healthcare facilities.

The war against the poorest country in the Middle East is unlikely to stop anytime soon as Saudi Arabia and the United Arab Emirates’ appetite for war in Yemen is seemingly on the rise, creating a favorable environment for the creation and propagation of epidemics. Survival in Yemen has, in some aspects, become nearly miraculous.