“We are in a climate emergency,” said meteorologist Eric Holthaus. 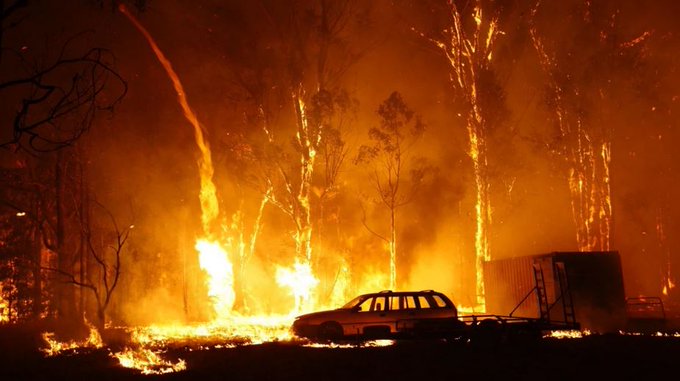 With destructive wildfires raging across the country amid a severe drought, Australia on Tuesday experienced its hottest day on record as the national average maximum temperature reached an unprecedented 40.9°C (105.6°F).

“That was the national average temperature. Some places were far hotter,” tweeted meteorologist Eric Holthaus. “Truly, an unthinkable and unlivable reality. We are in a climate emergency.”

Australia’s Bureau of Meteorology announced the new record temperature Tuesday, noting that the previous high of 40.9°C (104.5°F) was set in January 2013.

Preliminary results suggest that the 17th December was Australia’s hottest day on record at 40.9 ºC, with the average maximum across the country as a whole, exceeding the previous record of 40.3 ºC on the 7th January 2013. https://t.co/TKwWBuFPgJ pic.twitter.com/xOFpokoXos

Dean Narramore of the Bureau of Meteorology told the New York Times that Australia’s unprecedented heat is likely to get worse in the coming days as dry conditions continue.

“Friday looks like it will be a very bad day,” said Narramore. “All of this is connected. A record-late monsoon in India means the rain will be late coming to Australia, it’s the worst fire season we’ve seen across Australia, it’s warming through climate change, and it’s only the third week of summer.”

The record-breaking heat comes as more than 100 wildfires are currently burning across Australia, devastating millions of acres of land and enveloping densely populated cities like Sydney in toxic smoke.

The Guardian reported last week that bushfires in New South Wales and Queensland have emitted 250 million tons of carbon dioxide since August—nearly half of the country’s annual total greenhouse gas emissions.

“…the leadership vacuum and misinformation has been astounding.”
Australia is on fire, temperature records are toppling, and our PM is refusing to admit that anything is wrong. In fact, he’s currently on holiday. https://t.co/ZpQl3rSlyF#WhereTheBloodyHellAreYou #bushfires pic.twitter.com/6yGKi7ZpQd