The revelation is leading some to accuse Trump of setting a trap for Soleimani that resulted in his assassination.

By Emma Fiala Published 1-6-2020 by The Mind Unleashed 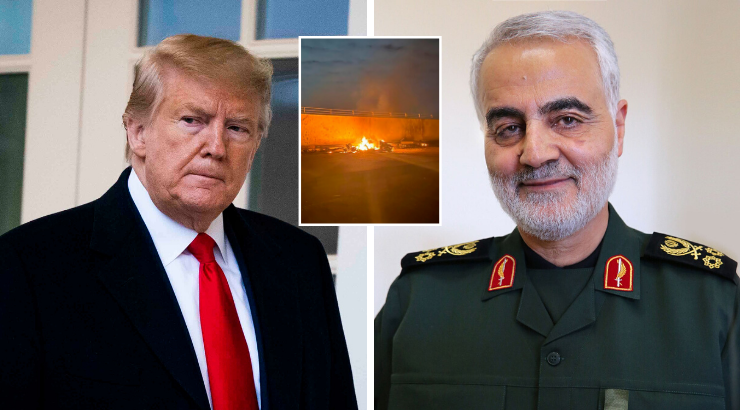 Iraqi Prime Minister Adil Abdul-Mahdi revealed on January 5 that the late General Qassem Soleimani was in Baghdad on request from Iraq in order to respond to Saudi Arabia regarding de-escalation proposals, in what can be considered a peace mission rather than one aimed at planning attacks on Americans, as U.S. media and government sources have continued to repeat.

Abdul-Mahdi was scheduled to meet with Soleimani on Friday, the same day he and six others were killed at the Baghdad airport.

According to the Iraqi Prime Minister, U.S. President Donald Trump was aware of and supported the idea of Iraq facilitating the transfer of information—with the goal of easing tensions in the region—between the Saudis and Iran in Iraq during a phone conversation with Abdul-Mahdi days prior to Soleimani’s assassination.

During that conversation, Trump asked Abdul-Mahdi to “play the mediator’s role.”

#Iran #IRGC commander #QassemSoleimani managed to reach with his death what he couldn’t reach when he was alive. That is his last spectacular act for Iran and for the “Axis of the Resistance”: legislation forcing the US to withdraw and cease all kind of collaboration.

“I was scheduled to meet martyr Soleimani at 8:30 in the morning.

He was killed because he was set to deliver a response from Iranians to a Saudi message, which was delivered to the Iranians to reach an important breakthrough in the situation in Iraq and the region.”

Abdul-Mahdi disclosed the information while addressing Parliament with a recommendation that Iraq withdraw all U.S. troops from Iraq.

Breaking: #Iraqi parliament votes for the withdrawal of all U.S forces and the “Global Coalition” from the country, & submit a complaint to the United Nations against the U.S for violating the sovereignty of Iraq. pic.twitter.com/Sb4oq4Zr81

Parliament voted on Sunday in favor of expelling all U.S. troops in addition to filing a United Nations complaint against the U.S. for violating the country’s sovereignty.

-A complaint to UN for #US target assassinations in #Iraq
-Impose on the gov to terminate the request of support from the interntnll coalition (all countries)
-End presence of ALL foreign forces and to prevent any country from using Iraq against another country pic.twitter.com/r5OTtZUs6d

It should be noted that, while Parliament’s vote to expel U.S. troops has been widely reported in U.S. media, Abdul-Mahdi’s most damning disclosure during the same session indicated that Soleimani was potentially set up by the U.S. government, has not.

The revelation from Abdul-Mahdi is leading some to accuse the U.S. government of setting a trap for Soleimani that resulted in his assassination. In fact, months ago U.S. Secretary of State Mike Pompeo pitched the idea of murdering Soleimani to Trump months ago.

“We took a bad guy off the battlefield. We made the right decision. I’m proud of the effort that President Trump undertook.”

The New York Times reports that the Pentagon offered Trump a series of responses to the increasing tensions between the two countries that came to a head after an Iranian-backed militia coordinated strikes on a U.S. base in Kirkuk, Iraq. Included in the potential responses was killing General Soleimani “mainly to make other options seem reasonable.”

Trump chose to strike back in what became a tit-for-tat series of attacks but, as a result, angry Iraqis stormed the U.S. Embassy in Baghdad in protest against those deadly air strikes. According to the Times, Trump “became increasingly angry” and then “stunned” officials when he chose the option of killing Soleimani. Pentagon officials were left “flabbergasted” and “alarmed about the prospect of Iranian retaliatory strikes on American troops in the region.”

The Washington Post also reports that the “decision to target Soleimani came as a surprise and a shock to some officials briefed on his decision, given the Pentagon’s long-standing concerns about escalation and the president’s aversion to using military force against Iran.”

If the latest developments that the U.S. knew Soleimani was traveling to Iraq on a de-escalation mission prove true, they completely shatter the Pentagon’s version of events that lead up to General Soleimani’s death.

Trump said on Friday that Soleimani was plotting “imminent and sinister attacks” on Americans, including diplomats and military personnel. According to Trump, the U.S. “took action to stop a war.” However, that narrative is quickly falling apart as new details emerge from Iraq.

On Saturday, tens of thousands of people in the United States rallied against U.S. troop presence in Iraq and aggression on Iran.

What appears to be millions attending Soleimani’s funeral procession in Ahvaz, an Iranian city usually described by mainstream media as “restive”, and hence hardly a Soleimani stronghold. Trump doesn’t know what is awaiting him across the Middle East pic.twitter.com/axTonhi13n