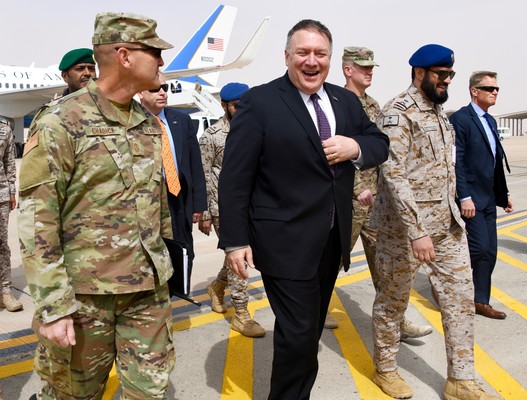 While the U.S. government has not given any indication of how long it expects its forces to be there, temporary structures are being replaced with more substantial ones, and the arrival of fighter jets suggests they are there for the long haul. Roads are also being resurfaced to and from the base.

More than half a million American troops were sent to Saudi Arabia during the first Gulf War in the 1990s. One of the chief motivations for Al-Qaeda’s attack on the United States in 2001 was its permanent military presence in Saudi Arabia, the site of many of the holiest places in Islam. The organization is reported to have announced: “The United States has been occupying the lands of Islam in the holiest of places, the Arabian Peninsula, plundering its riches, dictating to its rulers, humiliating its people, terrorizing its neighbors, and turning its bases in the Peninsula into a spearhead through which to fight the neighboring Muslim peoples.”

The move comes amid new tensions that have once again put Iran into American crosshairs. On January 3, Iranian general and statesman Qassem Soleimani was killed by a targeted U.S. drone strike in Baghdad, Iraq.

Secretary of State Mike Pompeo justified the move on the basis that he was preparing an “imminent attack” on the U.S., something that appears to contradict other government statements. This reason was also contradicted by Iraqi Prime Minister Adil Abdul-Mahdi, who stated Soleimani had flown to Iraq to attend regional peace talks. Furthermore, Abdul-Mahdi claimed that he had sought and received authorization from the Trump administration to do so.

In response, Iran fired a number of ballistic missiles at U.S.-occupied bases in Iraq, causing pinpoint damage, but no fatalities, as the U.S. was warned of the impending response. The Pentagon has claimed that dozens of troops have suffered brain injuries as a result, but Trump disagreed, saying they amounted to little more than headaches.

Perhaps the most important fallout from the conflict, however, was in Iraq. The Iraqi parliament passed a unanimous resolution on January 5 (with many abstentions), calling for the expulsion of all U.S. troops. And in response to what many saw as another example of American imperial arrogance, an estimated 2.5 million people marched through Baghdad and other cities with the same message: “get out America.” Those people were likely not impressed with Trump’s response. “We’re not leaving unless they pay us back for it…If they do ask us to leave, if we don’t do it on a very friendly basis, we will charge them sanctions like they’ve never seen before ever” the president replied, referencing the sanctions that are estimated to have starved a million Iraqis to death in the 1990s. The U.S. military almost immediately announced that, far from leaving, they were building three new bases, all very close to the Iranian border.

Although a hot war with Iran has so far been avoided, an online conflict continues to rage. Last month Iranian media outlet Press TV had its YouTube account permanently deleted. On Twitter, Trump-supporting Americans boosted anti-Soleimani messages, while Instagram and Facebook announced that all pro-Soleimani content would be deleted. “We operate under U.S. sanctions laws, including those related to the U.S. government’s designation of the Iranian Revolutionary Guard Corps (IRGC) and its leadership,” Facebook said, explaining that Trump’s new sanctions on Iran essentially made supporting the country on American websites illegal under U.S. law. This creates a tricky situation as over 80 percent of Iranians viewed the general favorably, meaning the U.S. government has succeeded in pressuring U.S. corporations to silence Iranians sharing majority opinions to other Iranians in Iran.

The U.S. has been Saudi Arabia’s chief foreign backer for many decades, supplying the government with arms to keep it in power. Secretary of State Pompeo visited the new American air base, telling reporters that, “the Saudis share our strategic objectives. They are an important ally and partner.” The State Department commented that “the longstanding US-Saudi security relationship” is strong and the new base “reaffirms America’s determination to stand with Saudi Arabia in the face of Iranian malign behavior.” The U.S. has also been a crucial partner in the Saudi war on Yemen, supplying, maintaining and training Saudis to use American weapons against Houthi militias. These new bases in the Middle East represent a worrying buildup of military might for those who are concerned with preventing another conflict in the already war-torn region.