“It was one of those moments where you feel like you’re a part of something incredible.” 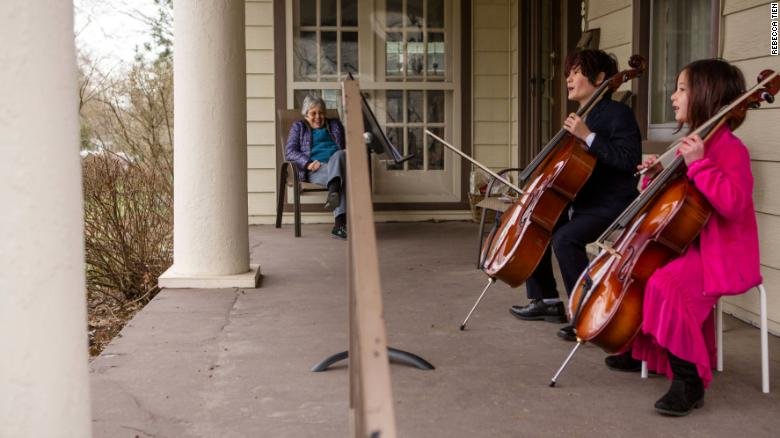 Over the past two months, people all over the world have been on lockdown due to the CoViD-19 pandemic. In Wuhan, China, the initial epicenter of the outbreak, residents of the city began singing and cheering from their windows and balconies as a way of comforting one another.

Videos from January that captured these moments were shared widely across the internet and people in other countries decided to continue this tradition as the quarantine reached their neighborhoods.

Now in Columbus, Ohio, where officials estimate that there could be as many as 100,000 undiagnosed cases of the virus, a video has emerged of two children who held a concert on the front porch of their elderly neighbor, who was self-isolating to protect herself from the virus.

9-year-old When Taran Tien and his 6-year-old sister, Calliope, heard that their neighbor Helena Schlam was stuck inside of her house and wanted to find some way to help her. Schlam said that she did not need any groceries so the two children dressed up and played their cellos on their neighbor’s front porch. The video was later shared on Twitter by the journalist Jackie Borchardt, who says she lives in the neighborhood.

Rebecca Tien, the children’s mother, told CNN that she hopes this was able to bring the community together during a difficult time.

“I loved watching how delighted they all were. It was one of those moments where you feel like you’re a part of something incredible. It was also a good way to remember the value of connection, especially at a time like this when everyone feels disconnected. Just to know we were a part of something so sweet, even just for a minute, meant a lot,” Tien said.

In one of the first viral quarantine videos that we have seen from a rural community, the children played classical tunes for 30 minutes.

Schlam, who kept a safe distance from the children at all times, told the Columbus Dispatch:

“It was so delightful. It was a little cold, but I just put on an extra coat. The kids are really quite talented, and it was so much fun.”

Meanwhile in Italy, a dance music DJ took out his mixer and some speakers and gave a performance for his community from the balcony.