“These are very large numbers by historical standards, but this is a rather unique shock that is unlike any other experienced by the U.S. economy in the last 100 years.” 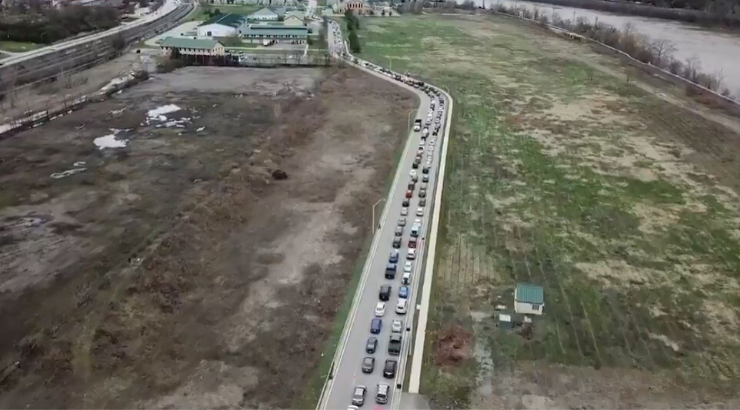 Hundreds of cars waiting to receive food from the Greater Community Food Bank in Duquesne, Pennsylvania on March 30, 2020. Photo: The Mind Unleashed

Economists at the Federal Reserve Bank of St. Louis are warning that if the current rate of U.S. job losses continues, the country’s unemployment rate could reach a staggering 32.1% by the end of June as the coronavirus pandemic-induced downturn sparks mass layoffs across the nation.

Miguel Faria-e-Castro, an economist with the St. Louis Fed, wrote in an analysis last week that 47 million more workers could lose their jobs by the end of the second quarter of 2020, bringing the total number of unemployed people in the U.S. to 52.8 million. As CNBC noted, that number would be “more than three times worse than the peak of the Great Recession.”

Faria-e-Castro’s projection of 32.1% unemployment would put the U.S. jobless rate significantly higher than the Depression-era peak of 24.9%.

“The projections are even worse than St. Louis Fed President James Bullard’s much-publicized estimate of 30% [unemployment],” CNBC reported. “They reflect the high nature of at-risk jobs that ultimately could be lost.”

Faria-e-Castro stressed that “the expected duration of unemployment” could matter more “than the unemployment rate itself, especially if the recovery is quick (and so duration is short).”

“These are very large numbers by historical standards,” Faria-e-Castro wrote, “but this is a rather unique shock that is unlike any other experienced by the U.S. economy in the last 100 years.”

A lethal pandemic is generating unprecedented levels of layoffs in a country that insists on tying health care access to employment. Millions will lose coverage at the very moment they need it most. https://t.co/japHL6MtKm

In response to the St. Louis Fed analysis, HuffPost senior reporter Zach Carter tweeted, “It remains simply incredible that Congress is not even in town during a crisis of this magnitude.”

It remains simply incredible that Congress is not even in town during a crisis of this magnitude. An astonishing, bipartisan failure of government. https://t.co/PbIEdXgejX

“I have been a labor economist for a very long time and I have never seen anything like this,” Heidi Shierholz of the Economic Policy Institute wrote in a blog post last week. “Furthermore, this is just the tip of the iceberg.”

More than 40 economists surveyed by Bloomberg on Monday said they believe new Labor Department unemployment numbers set for release Thursday will be even higher.

Thomas Costerg, an economist at the investment firm Pictet Wealth Management, predicted that new jobless claims could be as high as 6.5 million while Goldman Sachs estimated 5.25 million.

New York magazine’s Eric Levitz wrote Monday that while the “St. Louis Fed’s projection is just a rough estimate… there’s reason to think its catastrophic prediction is in the right ballpark.”

“It’s hard not to suspect that most every part of our economic life is going to get worse before it gets better,” Levitz added.