Critics warn the president’s latest nominees for lifetime appellate court positions are both committed to the “deadly agenda” of overturning the entire Affordable Care Act. 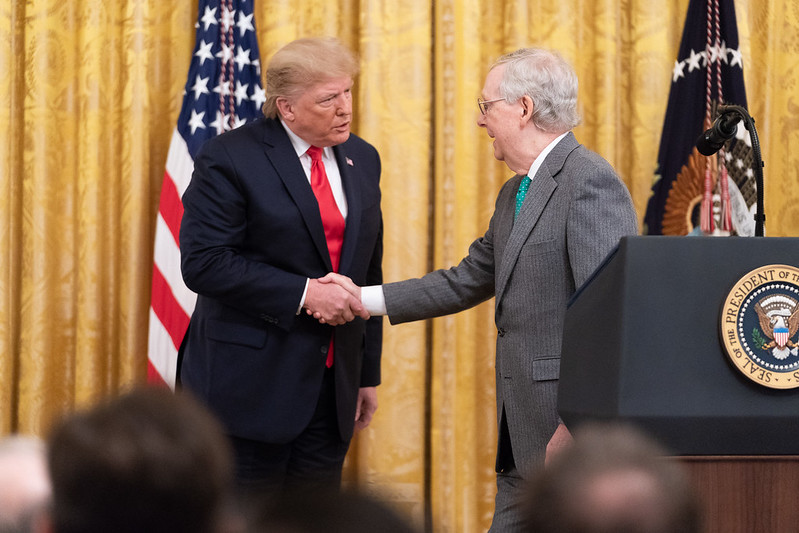 As the coronavirus pandemic continued to ravage the United States this week, killing and infecting thousands while shuttering schools and businesses, President Donald Trump proceeded with his ongoing effort to shift the federal judiciary to the far-right by announcing a fresh pair of lifetime nominees to appellate courts.

Progressive critics swiftly denounced the nominations, characterizing Walker and Wilson as “anti-healthcare judges” and highlighting their respective records of opposing the Affordable Care Act—a position that raised particular alarm given the pandemic that is expected to sicken hundreds of thousands and leave millions of Americans uninsured.

Vanita Gupta, president and CEO of the Leadership Conference on Civil and Human Rights, responded to Walker’s nomination in a series of tweets, pointing out his healthcare stances and that both he and Wilson—like so many of Trump’s judicial appointments—are right-wing white men.

And I need to say this: Wilson and Walker (who are – wait for it – both white men) would be Trump’s 52nd and 53rd circuit court judges – serving for life.

Trump has made 50+ appellate nominations, but NONE are African American. Only one is Latinx. 11 are women.

“A massive pandemic is testing the limits of our healthcare system, and the president is tripling down on dismantling healthcare for millions of people,” Alliance for Justice president Nan Aron said in a statement Friday. “He’s still supporting a lawsuit to overturn the entire Affordable Care Act, including protections for people with preexisting conditions, and now he wants to elevate Cory Wilson and Justin Walker, two stalwart advocates of that deadly agenda.”

“Shame on those who have given the president a lick of credit for his handling of this crisis,” she said of the COVID-19 outbreak, “while he’s been focusing on protecting the wealthy and powerful at the expense of those most impacted by the coronavirus pandemic.”

Earlier in the week, following Wilson’s nomination, Aron noted that the judge “called the ACA ‘illegitimate’ and ‘perverse,’ and encouraged the Supreme Court to overturn it in its entirety.”

“The Fifth Circuit has been conservatives’ primary venue for challenging this law, which has provided healthcare coverage to millions of Americans,” she explained. “That the president would choose this moment to try to further solidify opposition to healthcare on this important appeals court demonstrates how little he actually prioritizes the safety and health of Americans.”

As a reminder: Justin Walker attacked the Affordable Care Act and praised Brett Kavanaugh for writing a “roadmap” for SCOTUS to declare the ACA unconstitutional. pic.twitter.com/Skatr7ohMT

The Associated Press reported Friday that Walker has “deep ties” to Senate Majority Leader Mitch McConnell (R-Ky.) and “drew a ‘Not Qualified’ rating from the American Bar Association when Trump nominated him last year to be a federal judge in Kentucky.”

Critics also noted that just a few weeks ago, McConnell put the federal response to the COVID-19 pandemic on hold to join U.S. Supreme Court Justice Brett Kavanaugh in celebrating Walker’s swearing in for his initial appointment.

Today, Walker got nominated for an even higher position. https://t.co/O97YkITrh3

Walker is a vocal supporter and former clerk of Kavanaugh, a Trump appointee who was approved by the Republican-dominated Senate despite multiple allegations of sexual misconduct that came to light during his confirmation process.

Walker conducted 162 media interviews in 2018 – including 35 interviews on Fox News alone – defending then-nominee Kavanaugh (for whom Walker once worked as a law clerk).

No surprise Trump and McConnell want to swiftly elevate him to this powerful court. pic.twitter.com/ADZDAmYWoi

Summing up this week’s judicial developments in a tweet, Alliance for Justice declared: “Republicans are using the courts to attack our healthcare in the middle of a global health crisis. This is despicable.”

While the nominations of Walker and Wilson in the midst of a public health crisis clearly struck a nerve among progressives, Trump and McConnell’s joint effort to remake the federal judiciary has been a yearslong process that has led critics to warn that “our courts will have the final word on many of Trump’s policies and will be his most lasting legacy.”

Editors’ note: WHY does Congress have time to do this when they can’t meet for debate and can’t ask questions/interview the nominees? We are under a National Emergency, and this action does not pertain to it. We the People demand Congress use their powers solely for the purpose of helping the American People emerge from this crisis with as few lives lost/ruined as a result. Appointing court judges for life does not fit this description.