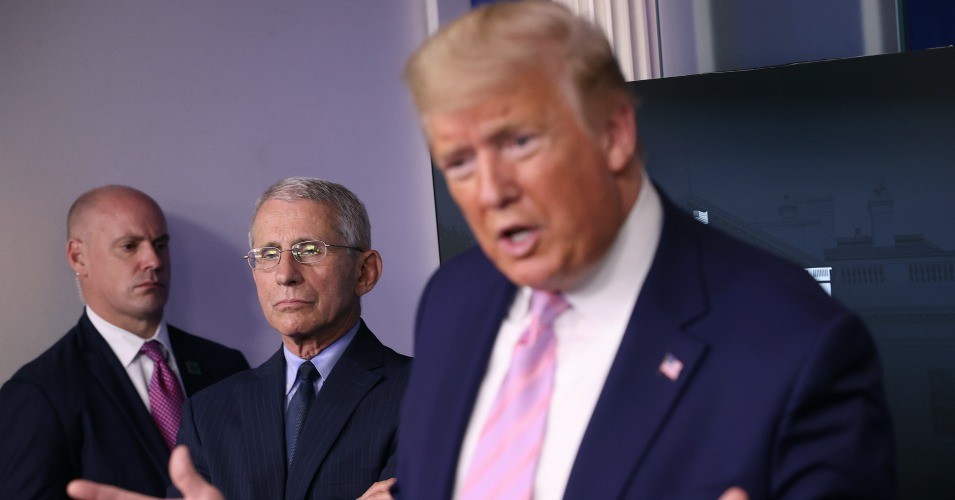 The nation’s top expert on infectious diseases was forced once again on Sunday to negate President Donald Trump’s latest claim that an anti-malaria drug can treat coronavirus, which the president made at his Saturday evening press conference.

On CBS’s “Face the Nation,” National Institute of Allergy and Infectious Diseases (NIAID) director Dr. Anthony Fauci told host Margaret Brennan that “in terms of science, I don’t think we could definitively say it works,” regarding the use of hydroxychloroquine for the virus.

“As I’ve said many times, Margaret, the data are really just at best suggestive,” Fauci said. “There have been cases that show there may be an effect and there are others to show there’s no effect.”

At his press briefing the previous evening, Trump said the federal government is adding millions of doses of hydroxychloroquine to the Strategic National Stockpile (SNS), which states have desperately been attempting to draw from in order to obtain supplies recommended by medical experts, including ventilators and personal protective equipment (PPE) for healthcare providers.

“What do you have to lose? Take it,” Trump said of the drug. “I really think they should take it. But it’s their choice. And it’s their doctor’s choice or the doctors in the hospital. But hydroxychloroquine. Try it, if you’d like.”

Trump says some remarkably irresponsible stuff about hydroxychloroquin: “What do you have to lose? Take it. I really think they should take it … try it, if you’d like.” pic.twitter.com/ULjKRfqEG5

As Common Dreams reported last month, three people in Nigeria were hospitalized after overdosing on the drug following Trump’s earlier claims about hydroxychloroquine. A man in Arizona died after ingesting choroquine phosphate, after his wife cited the president’s televised briefings as evidence that it could prevent the coronavirus, officially called COVID-19.

“‘What do you have to lose?'” Rep. Ilhan Omar (D-Minn.) tweeted after Trump’s briefing. “They can lose their life, you imbecile.”

Is he seriously asking, “What do you have to lose?”.

They can lose their life, you imbecile 🤦🏽‍♀️

God help us, with moronic questions like these he is turning these press briefings into a public health threat. https://t.co/46s2sXHy0R

Critics on social media warned others against heeding the president’s advice.

An early trial shows hydroxychloroquine is NOT effective at treating Coronavirus, but the drug does have deadly side-effects for many patients.

Trump just told the entire country to take this.

Let’s be clear: a man in Arizona listened to Trump last time round & died after taking chloroquine. And here is Trump today doubling down on his ‘medical advice.’ This president has blood on his hands. There’s literally no debate about it.https://t.co/oEJt6S1rdC https://t.co/fRPyhpB0xB

Some laboratory studies of a small number of cases have suggested hydroxychloroquine could stop the coronavirus from invading cells, and according to the New York Times, “some researchers think its ability to dial back an overactive immune system—the reason it is used for autoimmune diseases—might help relieve the life-threatening inflammation that develops in some coronavirus patients.”

But researchers say far more evidence is needed for the Food and Drug Administration (FDA) to approve the drug for anti-coronavirus use.

Editors’ note: During Sunday’s press briefing, President Trump not only doubled down on his irresponsible comments (and attacked a reporter while doing so), he also prevented Dr. Fauci from answering a question about the drug. Blood will definitely be on his hands.