“It is unfortunate we had to resort to the courts for this relief; ICE should be doing this on its own,” said the San Francisco public defender. 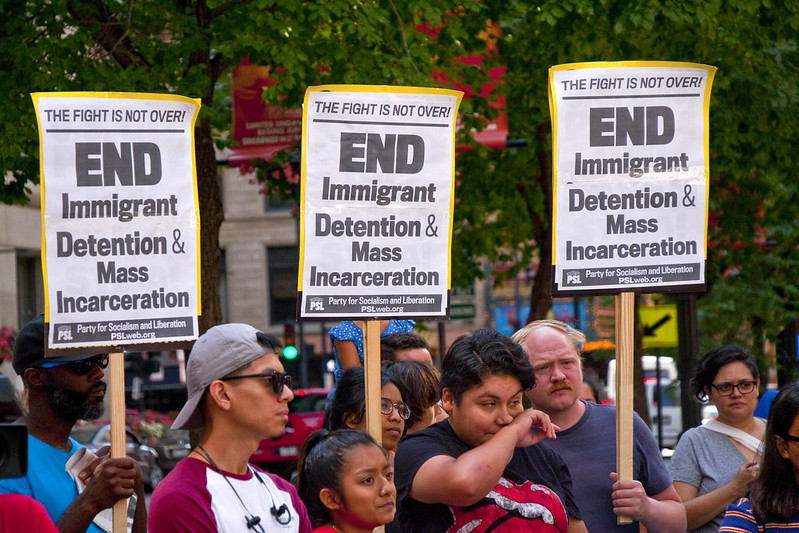 In a ruling celebrated Thursday by rights advocates seeking the liberation of as many detained immigrants as possible during the coronavirus pandemic, a federal judge in San Francisco ordered the release of four men whose respective ages and medical conditions make them particularly vulnerable to COVID-19.

“This decision is an important step,” William Freeman, senior counsel at the ACLU Foundation of Northern California, said in a statement. “The stakes for the release of detained persons are at an all-time high as the threat of the COVID-19 outbreak places them at an elevated risk of serious ailments or death.”

“Immigrants in ICE detention centers should be released immediately,” said San Francisco Public Defender Manohar Raju. “It is unfortunate we had to resort to the courts for this relief; ICE should be doing this on its own.”

It shouldn’t take a lawsuit from @sfdefender @ACLU_NorCal @ACLU_SoCal @lccrbayarea & Lakin/WilleLLP to protect people’s lives from this dangerous disease. ICE can & must release more people on its own.

Chesney wrote that “none of these [individuals] is in a position to meaningfully limit his exposure to COVID-19 while at Yuba or Mesa Verde.” Bree Bernwanger, senior staff attorney at the Lawyers’ Committee for Civil Rights of the San Francisco Bay Area, said that the judge’s decision “recognized that no immigration policy is more important than protecting human life.”

Plaintiffs Salmon Medina Calderon and Gennady V. Lavrus both have diabetes, while 82-year-old J. Elias Solario Lopez has a history of hypertension and kidney disease.

Shelly Clements’ husband Charles Joseph is also a plaintiff and suffers from severe asthma. She said that “immigration detention is unnecessary generally, but now with COVID it is putting people at risk,” echoing recent warnings from rights groups about all detention facilities, including the nation’s jails and prisons that are infamous for “cramped and unsanitary conditions.”

Amnesty International on Tuesday released a report which concluded that “detaining anyone solely for migration-related reasons during a global pandemic is cruel, reckless, and deadly.”

No social distancing. No sanitization measures. No masks or gloves.

Detainees’ pleas for protection against #COVID19 are met with indifference and inaction. This is unacceptable. https://t.co/scYWErLRsg

That sentiment was shared Thursday by attorneys for the plaintiffs, who promised to keep fighting for immigrants and others who remain in custody despite health concerns related to the virus outbreak.

“ICE’s abysmal response to COVID-19—including its intransigent refusal to heed public health experts and release as many detainees as necessary—violates the constitution,” declared Jordan Wells of the ACLU Foundation of Southern California. “Worse, it risks human life and threatens to exacerbate the pandemic. We are relieved for those who the court ordered ICE to release. And we will continue fighting for everyone unsafely languishing in ICE prisons.”

Judah Lakin, an attorney with Lakin & Wille, concurred that “ICE’s refusal to change its policies and practices during this pandemic is not only disheartening, but clearly unconstitutional,” and vowed to continue fighting for “the greater incarcerated population at large.”

Nationwide, there are currently over 451,000 confirmed COVID-19 cases and at least 15,938 people have died. ICE has confirmed that detainees across multiple facilities have tested positive for the virus.

ICE now says 35 immigrants in its custody have tested positive for coronavirus as of this morning, adding 3 new cases of detainees at Otay Mesa, California and Kearny, New Jersey. https://t.co/AiKLl45hoO pic.twitter.com/auJP2uVrnB

Tatalu Helen Dada, a 40-year-old mother and immigrant from Nigeria currently being held at LaSalle ICE Processing Center in Jena, Louisiana, wrote in an op-ed for Common Dreams on Thursday that an outbreak at her detention facility is “all but certain.”

“In my unit,” she explained, “80 women share three toilets, six showers, and eight telephones. We sleep in bunk beds just a few feet apart. There is no hand sanitizer, and the guards come in and out of the dorm without wearing masks or gloves.”

“I feel helpless,” added Dada, a former nursing student. “As a trained healthcare worker, I could be helping with COVID-19 response efforts. Instead, I am fighting for my life.”