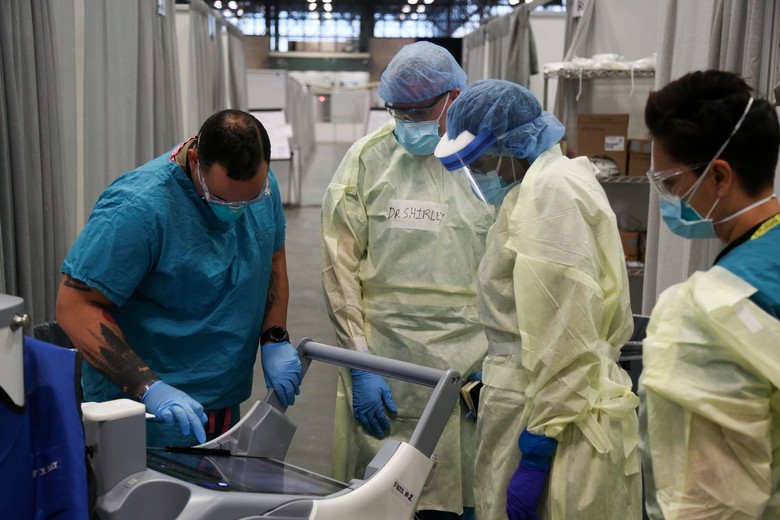 The Los Angeles Times reported late last week that the Trump administration’s “program to aid hospitals and doctors on the front lines of the coronavirus crisis is leaving behind the nation’s Medicaid safety net—the pediatricians, mental health providers, and hospitals that serve the poorest patients.

“That result is likely to deepen inequalities in America’s healthcare system as tens of billions of dollars of federal assistance go primarily to large medical systems that serve higher-income patients with Medicare or private health insurance,” the Times noted.

The Department of Health and Human Services (HHS) has wide discretion over how those funds are distributed, and critics are warning that the Trump administration is using that authority to deny relief to providers that serve more vulnerable populations. As Common Dreams reported last month, the White House tapped the nation’s largest private health insurer, UnitedHealth Group, to help distribute $30 billion in hospital funds.

“I don’t want to point fingers, but it seems like it’s the big players who are the ones who got listened to,” Dr. Assaad Sayah, CEO of the Massachusetts-based provider Cambridge Health Alliance, told the Times. “Who is sitting at the table when decisions are being made? I know it’s not me. It’s not organizations like us.”

As Rachana Pradhan and Lauren Weber of Kaiser Health News reported last month, “the $30 billion was distributed to more than 300,000 entities around the country but the decision to rely on past Medicare billings meant many providers hardly got a bite of the apple, including children’s hospitals and nursing homes, which predominantly rely on Medicaid and other programs for reimbursement.”

Trump is using hospital bailout fund money to disproportionately help high revenue hospitals, and leave safety-net systems in the lurch. The CEO of my hospital system is quoted. https://t.co/3Xym7ZMEox

“Obstetrician-gynecologists, pediatricians, and family physicians are facing dramatic financial challenges leading to substantial layoffs and even practice closures,” the organizations wrote. “These challenges threaten patients’ access to medically necessary and time-sensitive care during and after the public health emergency.”

Medicaid, which has been under attack by the Trump administration for years, provides crucial insurance coverage to around 70 million low-income Americans, including millions of children.

“Medicaid is a lifeline for millions of Americans, and its importance has never been more clear as America grapples with the coronavirus crisis that threatens everyone’s health and safety,” Brad Woodhouse, executive director of advocacy group Protect Our Care, said in a statement last Friday.

But Medicaid has taken a back seat in the Trump administration’s distribution of relief funds, state officials are warning. “The bigger your Medicaid business, the worse you do,” North Carolina Health Secretary Mandy Cohen told the Times.

As the Times reported, HHS initially doled out relief funds “based on providers’ Medicare revenues, a calculation that favored hospitals and physicians that care for large numbers of elderly patients.”

“Last week, Azar announced yet another formula, which would allot additional aid largely based on medical providers’ total revenues,” the Times noted. “This tipped the scales even more toward hospitals, physicians, and other providers that care for patients with commercial health insurance, which typically pays them much higher rates than either Medicare or Medicaid, the two main government health plans. Particularly disadvantaged are medical providers that focus on poor patients.”

Dr. Jennifer Sanderford, a Colorado-based pediatrician who serves Medicaid patients, told the Times that “there is just money being hemorrhaged with nothing coming in.” Sanderford said she hasn’t paid herself in a month and had to put vaccine orders for her patients on a credit card.

Moira Szilagyi, a pediatrician based in Los Angeles, called the Trump administration’s approach to the crisis “a tragedy and a travesty.”

“Forty-eight percent of America’s children are on Medicaid and CHIP,” Szilagyi tweeted, referring to the Children’s Health Insurance Program.