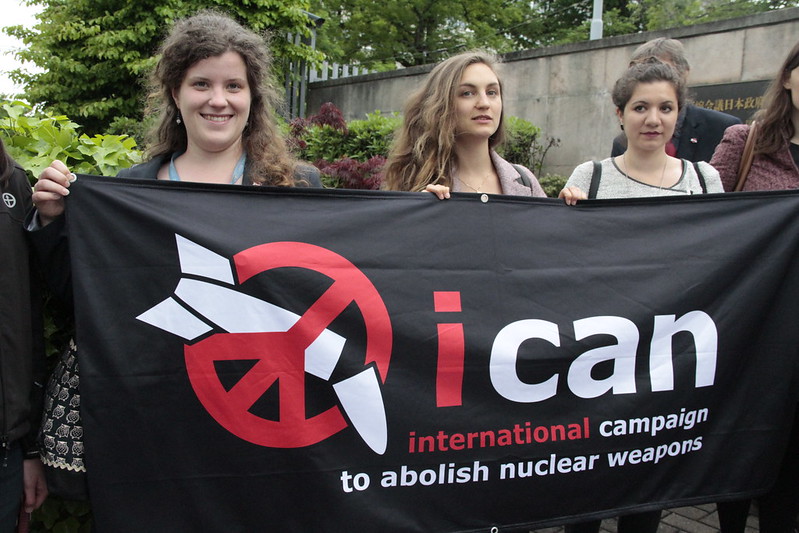 The demand came in a letter to the president—also sent to Pentagon chief Mark Esper and Energy Secretary Dan Broulliette—led by Sen. Ron Wyden (D-Ore.) and Rep. Bill Foster (D-Ill.).

The letter comes after the Washington Post reported last month that the administration had floated in May the idea of a carrying out the first nuclear test explosion since 1992 as a show of force to Moscow and Beijing, with one senior administration official calling the idea “very much an ongoing conversation.”

“A return to nuclear testing is not only scientifically and technically unnecessary but also dangerously provocative,” wrote the lawmakers. “It would signal to the world that the U.S. no longer has confidence in the safety, security, and effectiveness of our nuclear weapons. It would needlessly antagonize important allies, cause other countries to develop or acquire nuclear weapons, and prompt adversaries to respond in kind—risking a new nuclear arms race and further undermining the global nonproliferation regime. None of these developments would improve America’s national security or strengthen its position in the world.” The possibility of the resumption in testing was also the subject of a separate letter sent Monday to Esper and Broulliette from a group of House Democrats.

In that letter, House Armed Services Committee Chairman Adam Smith (D-Wash.) along with Reps. Jim Cooper (D-Tenn.), Nita Lowey (D-N.Y.), Marcy Kaptur (D-OH), and Pete Visclosky (D-IN) express concern that Congress was not informed of the content of the meeting in which the idea was floated. The lawmakers also called it “unfathomable that the administration is considering something so short-sighted and dangerous, and that directly contradicts its own 2018 Nuclear Posture Review (NPR).”

The NPR, which this administration often cites as inviolable, makes clear that “the United States will not resume nuclear explosive testing unless necessary to ensure the safety and effectiveness of the U.S. nuclear arsenal.” There is no information to suggest nuclear explosive testing is necessary based on these factors. In fact, the entities responsible for the safety and effectiveness of the nuclear deterrent—the Department of Energy’s National Nuclear Security Administration (NNSA) and its nuclear weapons laboratories—have, without fail for 24 years, certified to the President that our nuclear weapons stockpile remains safe, secure, and reliable without the need for testing.

As the nation which tested more nuclear devices than every other nation combined, the United States benefits most from a global testing moratorium. For this same reason, ratifying the Comprehensive Test Ban Treaty would substantially enhance our national security. The notion that resuming testing would somehow pressure Russia or China into arms control negotiations is baseless and uninformed. Resuming testing would open the door for widespread global testing, which would only serve to benefit our adversaries and make Americans less safe. The administration should instead focus its efforts on productive arms control negotiations, including extending the New START Treaty, seeking limitations on the introduction of new and unnecessary military capabilities, and continuing to champion the long-standing global moratorium on testing.

The House lawmakers also pointed to the “far-reaching human and environmental impacts” that would accompany the resumed nuclear testing.

“One need look no further than the public health and environmental toll that previous nuclear testing—both by the U.S. and by others—has taken here at home and around the globe,” the letter states.

The lawmakers gave a June 22 deadline for the answers to a number of questions including what legal authority Trump would cite to conduct the testing; whether intelligence agencies have analyzed the likely impacts of the testing; and what changed since the Department of Energy’s National Nuclear Security Administration (NNSA) certified in February that the nation’s nuclear stockpile was safe.

The possibility of the resumed nuclear testing had already sparked concern outside of Capitol Hill.

Sara Z. Kutchesfahani wrote Friday at the Bulletin of the Atomic Scientists:

A U.S. resumption of nuclear tests would send a bad signal to other countries and prompt them to test and create their own nuclear weapons. Moreover, innocent bystanders could be exposed to the radioactive fallout from a nuclear explosion. Tens of thousands of people have been afflicted by leukemia, thyroid cancer, miscarriages, and severe birth defects as a result of past nuclear testing in the United States alone.

Half of those tests—1,030—were conducted by the U.S., Kutchesfahani wrote, a total “more than the number of tests done by the other seven nuclear testing countries combined.”

Center for Arms Control and Non-Proliferation executive director and former Congressman John Tierney (D-Mass.) also recently criticized the administration’s proposal, calling it “nothing short of appalling” and “a clear sign of this administration’s continued willingness to put Americans at risk,” and especially concerning in light of the coronavirus pandemic.

“We are in the midst of the worst public health crisis of our lifetime and this is what the Trump administration is doing with its time?” he said. “When Americans say that they want and need tests, they weren’t talking about the nuclear kind.”

“Nuclear brinkmanship is not a game; nuclear weapons are not toys; and the Americans who live near or downwind of the Nevada National Security Site are not pawns to be blasted across a radioactive chess board,” added Tierney.

“A Trump nuclear test would cross a line no nation thought the U.S. would ever cross again, and is threatening the health and safety of all people,” said ICAN executive director Beatrice Fihn.

“Testing poisons environments, food, and lives—Americans are still dying from the original nuclear weapons tests. It would also blow up any chance of avoiding a dangerous new nuclear arms race. It would complete the erosion of the global arms control framework and plunge us back into a new Cold War. Only a multilateral solution can shore up these bilateral treaties Trump is ripping up,” said Fihn.

“The TPNW is that solution,” she said, referring to the historic 2017 Treaty on the Prohibition of Nuclear Weapons, which would ban the bomb.

The U.S. has not signed that treaty.