“As far as actual change, to save lives, that is not happening,” said the daughter of one victim killed in the 2018 Camp Fire in Paradise, California. 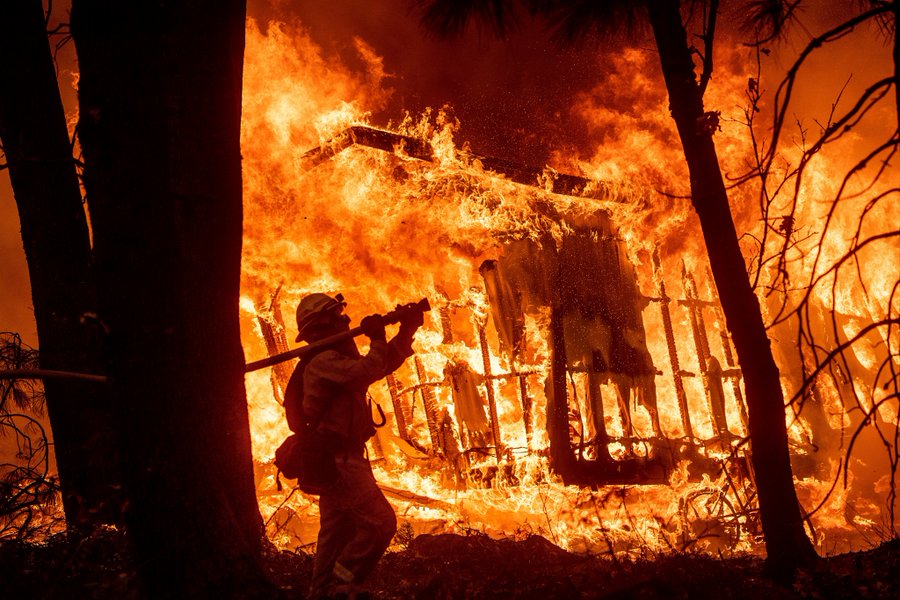 The CEO of Pacific Gas & Electric pled guilty on behalf of the company Tuesday to 84 counts of involuntary manslaughter in a dramatic hearing regarding the devastating Camp Fire of 2018, but advocates for corporate accountability argued the nation’s largest utility should face more concrete consequences for the crime.

A county investigation after the Camp Fire, one of the most destructive wildfires in U.S. history, found PG&E let its power grid deteriorate and scaled back inspections of its equipment, allowing a hook connected to a transmission tower to break and start the blaze that killed 84 people and nearly wiped out the entire town of Paradise, California, leaving just 5% of buildings undamaged.

CEO Bill Johnson entered guilty pleas for PG&E for each of the 84 deaths on Tuesday as the Butte County Superior Court displayed photos of each victim. The company also pled guilty to starting the fire unlawfully, another felony.

Despite the investigation concluding that corporate wrongdoing in the interests of boosting shareholder profits and saving money for the $85 billion utility, which serves 16 million people, was to blame for the fire, Superior Court Judge Michael Deems is expected this week only to slap PG&E with a $3.5 million fine—equivalent to less than $42,000 per victim—plus $500,000 for the cost of the investigation.

Investigators found that the transmission tower that started the fire was never significantly upgraded after PG&E inherited it from Great Western Power Co. in 1930, and that “PG&E was aware that the hooks and holes were rubbing on each other causing wear.”

ProPublica editor Jesse Eisinger wrote that without any of the leaders of PG&E being sentenced to prison time, “What’s to keep it from future wrongdoing?”

Yes, the CEO needed to stand in court and say “guilty” 84 times. That’s worth something. Moral opprobrium for corporate crime is necessary.

But the company is a regulated monopoly. The guilty plea means little & the fine even less.

What’s to keep it from future wrongdoing?

The company, Eisinger noted, is currently “a recidivist…on probation for a previous crime”—a status that has led to prison time for many Americans guilty of far less deadly offenses.

*And* the company is a recidivist! The company on probation for a previous crime!

This result this time: No prison for anyone.

In 2010, PG&E was placed on criminal probation after its natural gas lines exploded part of San Bruno, California, killing eight people. The company’s probation period does not end until January 2022.

Christina Taft, whose mother Victoria died in the Camp Fire, told local ABC affiliate KJCT that she did not believe the fine and the emotional hearing would stop PG&E from commiting wrongdoing in the future.

“As far as actual change, to save lives, that is not happening,” Taft said.

District Attorney Mike Ramsey told the news outlet that the county’s investigation laid “the foundation for imprisoning members of PG&E’s future management team if the utility doesn’t live up to its promises.”

“They are on notice,” he said. “The excuses are gone.”

Jamie Henn, co-founder of the climate action group 350.org, said the fact that Johnson pled guilty to the deaths of 84 people raised questions about when fossil fuel executives will be held accountable for the lives lost due to the continued extraction of oil, gas, and coal.

If PG&E is guilty of 84 deaths because their power line sparked a wildfire, how many deaths are on the hands of fossil fuel executives who are knowingly setting fire to our entire planet? https://t.co/E6eYeXkQbB

“How many deaths are on the hands of fossil fuel executives who are knowingly setting fire to our entire planet?” Henn tweeted.

Editors’ note:  If corporations are people too, there is no immunity, statute of limitations or “fine” that absolves the MURDER of 84 people. THIS is what is wrong with the US “Justice” system today, in addition to systemic and deep seated racial and ethnic biases.