A new study published this week by Data for Progress shows that voters overwhelmingly (58 percent to 24 percent) support the creation of a new agency of first responders to deal with problems in the community – an agency that would explicitly undermine the police’s purview. The public would like to see the service, whose agents would resemble social workers more than police officers, take over a great number of situations police currently deal with, including mental health crises, drug addiction problems (including overdoses), and issues regarding homelessness. Significant numbers of people want to see the new agency tackle issues like spousal abuse and all non-violent crimes as well. “For elected officials looking to strengthen their communities and take action in the face of mass protest on police brutality, creating a non police first-responder agency proves to be a popular option that deserves their attention,” the report concludes. 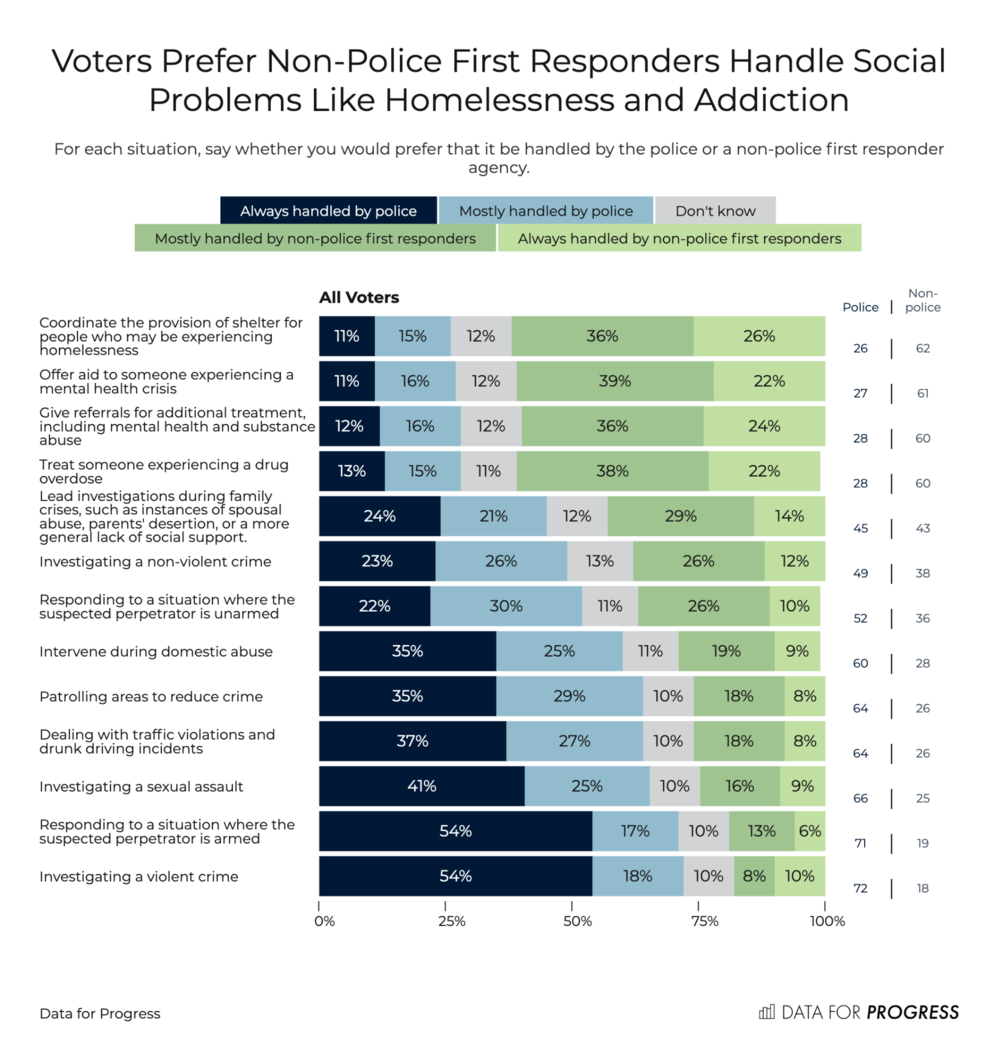 Protests erupted in all 50 states and around the world following the release of video showing Minneapolis police officer Derek Chauvin kneeling on the neck of Geroge Floyd, an unarmed black man, suffocating him to death. Authorities around the country responded with force to control and quash the protests, with over 30 states mobilizing the National Guard. New York City declared a curfew while President Trump encouraged his forces to shoot whomever they deemed to be “thugs” and “looters.” “When the looting starts, the shooting starts,” he tweeted. Opinion polls have shown that nearly three-quarters of Americans are sympathetic to the protestors, while large majorities oppose Trump’s actions. 60 percent of the public, including two-thirds of independent voters, disapprove of the president’s handling of the situation, with the number who strongly disapprove outnumbering those who strongly approve three-to-one.

Today, the president appeared to up the ante, implying that “any protesters” that show up to his rally in Tulsa tomorrow evening will be treated far worse than they have been in Minneapolis, Seattle, or New York. “It will be a much different scene,” he said.

However, the tide seems to be turning against the man who styles himself the “law and order president.” Voters support sweeping changes made to police; 83 percent want a ban on racial profiling, 92 percent want police to be required to wear body cameras. White Americans’ concern over police violence has increased by 50 percent since 2019. Twice as many say police themselves are treated too leniently as did last year. Perhaps more remarkably, 39 percent of the country (128 million people) are ready to dismantle the police entirely.

Images and accounts of police escalating the violence and responding brutally to protesters seem to have turned the public sour on the institution. Hundreds of journalists have been attacked, with several arrested or assaulted live on air. One case in point is freelancer Linda Tirado, who was shot in the face by police in Minneapolis, permanently losing the sight in one eye. Tirado was well away from the action, and the last images she captured show police pointing their weapons at her. Medical workers have also been singled out and beaten up. After just a week of protests, the total arrests exceeded that of nearly 18 months of continuous demonstrations in Hong Kong, and with far more fatalities, too.

Among the most prominent victims have been police reform advocates and advisors themselves. In San Jose, police shot their own racial bias trainer in the groin, rupturing his testicles, even as he was alone, speaking to them calmly. In Chicago, cops beat up the president of their police board, even though he wasn’t protesting, just walking in the street. In Denver, police shot and gassed an attorney on their use of force committee. And in Ohio, they pepper sprayed a congresswoman trying to prevent more bloodshed. In 2017 too, police beat up an undercover cop at a demonstration against police immunity for killing black men. In all these cases, the victims were African Americans.

With a presidential election upcoming in November, the response of the Trump administration to the George Floyd protests will have a significant impact on the future direction of the country. However, the Democratic Party has been reticent to offer any concrete policy changes, with Joe Biden strongly leaning towards former prosecutor Kamala Harris as a running mate, offering a “tough on crime” ticket to voters at an inopportune time. Thus, it is far from certain that the public’s wishes will be fulfilled by either party come November.