“This is crazy by any standard. The president of the United States is actively trying to sabotage the election.” 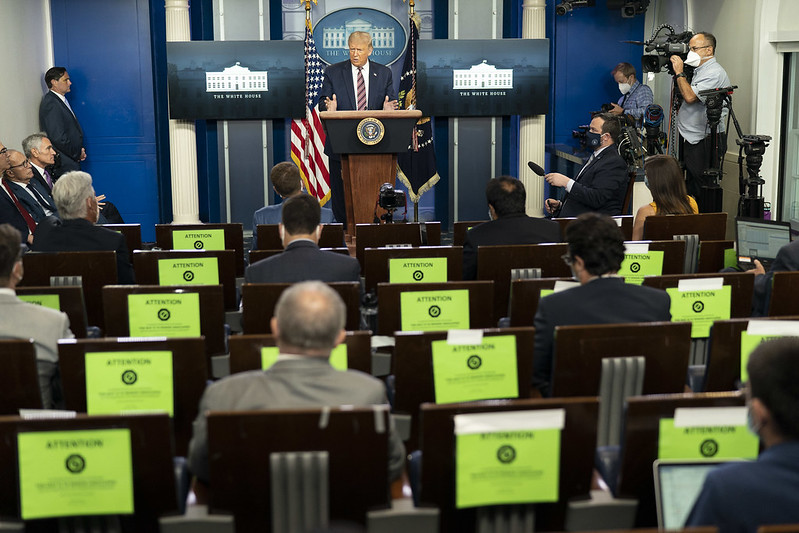 President Donald Trump proclaimed Wednesday that the U.S. Postal Service doesn’t have the capacity to handle an unprecedented increase in mail-in ballots because it lacks funds that his administration is blocking, remarks that were immediately viewed as an open admission of election sabotage by a president who has previously called USPS “a joke.”

During his daily Covid-19 briefing Wednesday evening, Trump dismissed Democratic congressional leaders’ demands for $3.5 billion in election assistance for states and $25 billion for USPS as “ridiculous” and vowed to continue blocking the funds. While USPS leadership insists it has “ample capacity” to meet election needs, postal workers have warned that without emergency funding, the agency could struggle to deliver mail-in ballots on time in November.

The president’s comments came shortly after an attempt to revive coronavirus relief talks quickly fell apart Wednesday due to disputes over the size of the legislative package and specific items, including emergency Postal Service funding.

In talks over the CARES Act in March, Trump threatened to veto the sweeping relief legislation if it included a $13 billion direct grant to USPS that lawmakers originally agreed to provide. The bill ultimately included a $10 billion loan—to which Trump’s Treasury Department attached conditions that critics warned will give the administration unprecedented access to USPS operations.

“Trump just comes out and says it: He is blocking money to keep the Postal Service afloat in an attempt to cast the election as fraudulent,” Washington Post reporter Jacob Bogage tweeted in response to the president’s briefing Wednesday.

Stephen Wolf of Daily Kos Elections said “Trump is stripping the U.S. Postal Service for parts both to thwart mail voting that threatens his re-election and so his cronies can profiteer off of it as the GOP has long wanted to.”

“This is crazy by any standard,” tweeted Hans Kristensen, director of the Nuclear Information Project at the Federation of American Scientists. “The president of the United States is actively trying to sabotage the election.”

Ahead of the president’s briefing, the entire Senate Democratic caucus sent a letter slamming Postmaster General Louis DeJoy—a major Republican donor to Trump—for “considering changes that would increase costs for states at a time when millions of Americans are relying on voting by mail to exercise their right to vote.”

“We have received reports that in the last several weeks, the Postal Service sent letters to state election officials that indicate that the Postal Service will not automatically treat all election mail as First Class,” the senators wrote. “If any changes are made to longstanding practices of moving election mail just months ahead of the 2020 general election, it will cause further delays to election mail that will disenfranchise voters and put significant financial pressure on election jurisdictions.”

During his press conference Wednesday, Trump praised DeJoy—a former logistics executive with tens of millions invested in USPS competitors—as “a great person” and “a great businessman.”

Joining their Senate colleagues in raising alarm about DeJoy’s policy changes at USPS, more than 170 House Democrats sent a letter condemning the Postmaster General’s “reductions of overtime availability, restrictions on extra mail transportation trips, testing of new mail sorting and delivery policies at hundreds of Post Offices, and…reduction of the number and use of processing equipment at mail processing plants.”

“During the once-in-a-century health and economic crisis of COVID-19, the Postal Service’s smooth functioning is a matter of life-or-death, and is critical for protecting lives, livelihoods and the life of our American Democracy,” the lawmakers wrote. “The House is seriously concerned that you are implementing policies that accelerate the crisis at the Postal Service, including directing Post Offices to no longer treat all election mail as First Class.”

Editors’ note; Meanwhile, the Supreme Court made it easier for people to vote by mail in Rhode Island. The disconnect between the judicial and executive branches is stunning.