The femicide of a 20-year-old girl on the Mexican Caribbean coast adds to a pandemic of bloody murders that do not remit despite popular outrage. 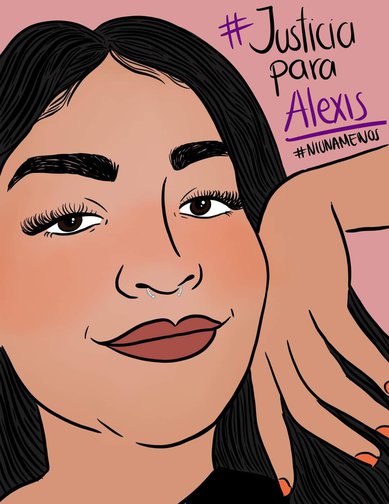 “Im afraid to leave the house and never see my mom again.”

The details were sickening and at the same time so familiar. Another young woman missing, raped, murdered and mutilated. This time she was 20 years old and her name was Bianca Alejandrina Lorenzana, known as Alexis, and, until November 7, 2020, she lived in the balmy resort town of Cancún, Mexico. She had dared to leave the house alone one evening to make a little money selling a vape and now she was never coming back. Her body, like those of so many of her sisters, had been cut up and placed in garbage bags.

“We’re not just worrying about hurricanes and natural disasters. We also have to worry about femicides ripping out women’s lives.”

Hurricanes Delta and Zeta had just passed through Quintana Roo, and the tension at the protest on November 9 was palpable. “Let it burn. Burn it all down!” her anguished mother cried when the plywood boards protecting the windows of Cancún’s town hall caught fire as protestors spray painted “Ni una menos. Ni una más. Alexis, Fátima” (Not one less, not one more, Alexis and Fátima, in honor of a 7-year-old abducted, raped and killed in Mexico City in February).

And then the police began to beat reporters, seize cell phones, and shoot above the gathering with live ammunition. A local television station reporter was clubbed on the head, while a photographer’s head was grazed by a bullet.

It had been a relatively small gathering because of the pandemic, and it took place early in the evening, though overcast skies and November’s 6 pm sunset might make recordings of the event seem later. In the light of the following day, authorities scrambled to make their excuses.

The female mayor of Cancún was quick to condemn the police action, and the governor insisted he had explicitly ordered the chief of police not to react with force. Even the United Nations expressed their disapproval and called for an investigation.

Still, there is something about a woman’s anger that is often met with outsized rage. It’s why, according to a study that came out this week, women in Mexico serve longer prison sentences than men, five years more on average. “Woman are seen as caretakers and punished more severely for transgressions,” the study said.

In the U.S., women who kill male spouses and partners are sentenced to serve an average of 15 years whereas men who kill female partners are only sentenced to four years. The ACLU has published a litany of inordinate punishments U.S. women receive when they step out of their traditional roles.

Despite heightened awareness, the rate of femicide, or murders of women and girls, is sharply increasing in Mexico, as well as in other parts of the world. According to the U.N., many countries are reporting higher indices of domestic and gender-based violence, despite or because of lockdowns due to the pandemic. Factors such as increased economic and psychological stress and community resources being diverted away from women’s services are contributing to the crisis.

On February 10, Alexis wrote something concerning on her Facebook page. “Yesterday something happened to me that I don’t want to talk about but that has led me to a world of thoughts I can’t get out of my head. Where does a woman’s vulnerability begin and where does it end, according to our society?”

We may never know what happened that day, but the following words of Alexis were prescient, and also reveal her true strength and bravery.