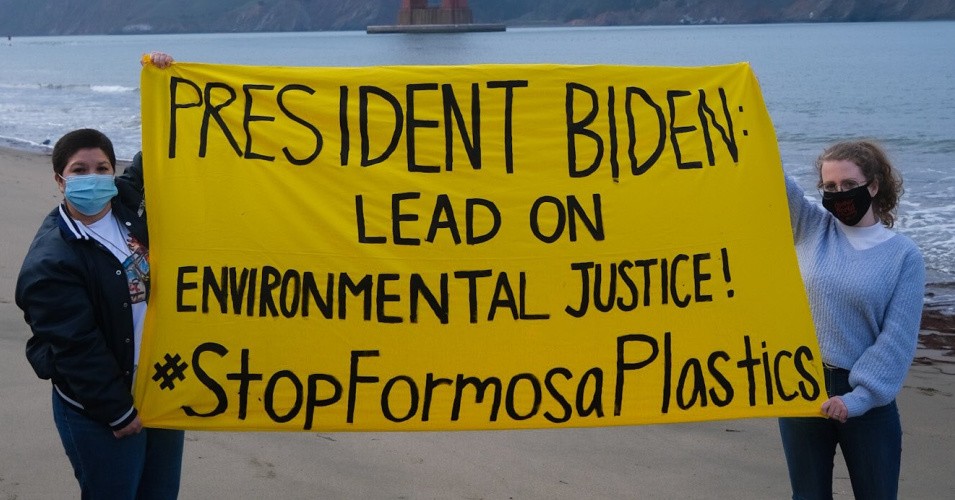 Residents of St. James Parish, Louisiana and environmental justice advocates nationwide have come out against the Taiwan-based Formosa Plastics Group’s plans for a $9.4 billion complex that would release cancer-causing chemicals and, according to one watchdog’s estimate, produce 13.6 million tons of planet-heating emissions per year.

As Reps. Raúl M. Grijalva (D-Ariz.) and Donald McEachin (D-Va.)—authors of the Environmental Justice for All Act—asserted in their letter (pdf) to the president, “This disastrous project is an affront to environmental justice and contrary to your goals to reduce pollution in frontline communities.”

“Along the 85-mile stretch between Baton Rouge and New Orleans, communities of color are already overburdened with the cumulative impacts of more than 150 petrochemical facilities,” the congressmen noted, detailing the complex’s anticipated impacts on public health, the local environment, and the climate.

“The residents of St. James Parish—and in fact, all Louisianians—deserve to breathe clean air, drink clean water, and live in community free [of] toxic pollution,” said McEachin. “It is imperative that we protect people’s health over polluters’ profit, and revoke the Army Corps’ permit for the proposed Formosa Plastics petrochemical complex.”

Early last year, the Center for Biological Diversity, Healthy Gulf, the Louisiana Bucket Brigade, and RISE St. James sued the Trump administration over a federal permit for the project. In mid-November, the Army Corps of Engineers suspended that permit to complete a broader environmental review.

“The facts are clear, and environmental justice leaders, environmental nonprofits, and community members all agree that this project must be terminated,” wrote Grijalva and McEachin, warning Biden that “ultimately, the Formosa Plastics project is a leap backwards from your vision to build back better.”

“We are on the precipice of achieving racial justice and creating a sustainable and green economy,” they added. “Allowing the Formosa Plastics complex to continue would cause irreparable harm to the Black community members of St. James Parish, destroy the environment, and set back your goals of achieving an equitable and just transition. Mr. President, the time to end this project is now.”

The lawmakers’ demand was echoed by local organizers including RISE St. James founder Sharon Lavigne, who said that “when President Biden was elected I had hope that he would change things, that he would save the lives of people in St. James Parish and stop the Formosa project.”

“It lies in his hands,” Lavigne continued. “He can stop it. Our governor wants it, our politicians want it, but they are not listening to the citizens. We are asking President Biden to save our lives.”

Anne Rolfes, director of Louisiana Bucket Brigade, said that “Formosa Plastics is an opportunity for President Biden to take bold action on environmental justice and climate change, two issues that are important to him and important to us.”

“There has been so much wrong on these issues, not just in the last four years but in the last 50,” Rolfes added. “Now is the moment to change things. President Biden can create a lasting legacy and stand up for the values of equality that we know he believes in.”

“If we’re truly going to build a better economy and a healthier, more livable world, we have to stop treating large chunks of the country as sacrifice zones,” he said. “Millions of Americans today are expected to breathe polluted air, drink polluted water, and live on polluted land as the price of other people’s prosperity. President Biden knows that we can’t keep living like that, and I know he’ll do the right thing here.”