“Whether humanity has the collective wisdom to navigate the Anthropocene to sustain a livable biosphere for people and civilizations, as well as for the rest of life with which we share the planet, is the most formidable challenge facing humanity.” 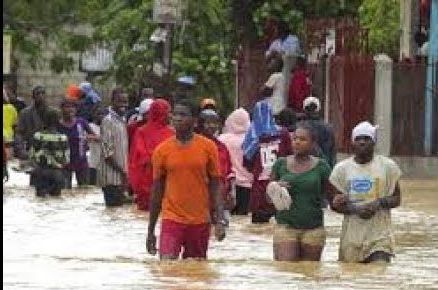 People in Haiti after TS Laura in August 2020. Screenshot: YouTube

A new analysis examining humanity’s central role in disrupting the support systems of the natural world argues that far-reaching action this decade—including a halt to vast inequalities and the irresponsible deployment of advanced technologies—is vital if a more vibrant and sustainable future is to be achieved.

Published earlier this month in Ambio, a journal of the Royal Swedish Academy of Sciences, the analysis considers the “profound meaning” of the current Anthropocene era, a period of Earth’s history —”one that we are only beginning to fully comprehend” the paper notes—in which the biosphere is being shaped by human activity more than any other natural force.

“We now know that society needs to be viewed as part of the biosphere, not separate from it,” the analysis states. “Depending on the collective actions of humanity, future conditions could be either beneficial or hostile for human life and wellbeing in the Anthropocene biosphere. Whether humanity has the collective wisdom to navigate the Anthropocene to sustain a livable biosphere for people and civilizations, as well as for the rest of life with which we share the planet, is the most formidable challenge facing humanity.”

Written for the upcoming Nobel Prize Summit, a first-of-its-kind digital gathering to be held April 26-28 to discuss “the state of the planet in the wake of the Covid-19 pandemic,” the new report focuses on the dynamic between unprecedented environmental degradation on the one hand and a situation in which vast economic inequality has created a political situation in which taking the necessary steps to alter humanity’s trajectory has proven almost impossible.

“The risks we are taking are astounding,” says Johan Rockström, director of the Potsdam Institute for Climate Impact Research and another co-author of the analysis. “We are at the dawn of what must be a transformative decade. The Nobel Prize Summit is really the scientific community shouting ‘Wake Up!'”

Exploring this “interwined planet of people and nature,” the paper explains:

The Anthropocene is characterized by a tightly interconnected world operating at high speeds with hyper-efficiency in several dimensions. These dimensions include the globalized food production and distribution system, extensive trade and transport systems, strong connectivity of financial and capital markets, internationalized supply and value chains, widespread movements of people, social innovations, development and exchange of technology, and widespread communication capacities.

But while the achievements of the modern age are impressive in a certain light, the decades since the Industrial Revolution have also seen the rise of an unparalleled assault on biodiversity and the planet’s natural systems.

“In a single human lifetime, largely since the 1950s, we have grossly simplified the biosphere, a system that has evolved over 3.8 billion years. Now just a few plants and animals dominate the land and oceans,” said lead author Carl Folke, director of the Beijer Institute of Ecological Economics and chair of the Stockholm Resilience Centre, in a statement Monday.  “Our actions are making the biosphere more fragile, less resilient and more prone to shocks than before.”

This decade we must bend the curve on emissions & biodiversity loss & become effective planetary stewards, urge an international group of scientists in a new ‘State of the planet’ report published ahead of the first #NobelPrizeSummit. @theNASEM @NobelPrize https://t.co/0cLx1Hq8nW

The report’s summary catalogs a broad array of contemporary research and scholarship on the Anthropocene era, including the ways in which human activity and society has come to dominate the planet:

According to Line Gordon, co-author of the report and director of the Stockholm Resilience Centre, “This is a decisive decade for humanity. In this decade we must bend the curves of greenhouse gas emissions and shocking biodiversity loss. This means transforming what we eat and how we farm it, among many other transformations.”

From the Covid-19 pandemic to increasingly destructive extreme weather events, the report details how the health of the world’s natural systems are increasingly at the mercy not only of human activity, but also a human politics in which course corrections are more difficult than ever to achieve. According to the paper:

Climate change impacts are hitting people harder and sooner than envisioned a decade ago (Diffenbaugh 2020). This is especially true for extreme events, like heatwaves, droughts, wildfires, extreme precipitation, floods, storms, and variations in their frequency, magnitude, and duration. The distribution and impacts of extreme events are often region specific (Turco et al. 2018; Yin et al. 2018). For example, Europe has experienced several extreme heat waves since 2000 and the number of heat waves, heavy downpours, and major hurricanes, and the strength of these events, has increased in the United States. The risk for wildfires in Australia has increased by at least 30% since 1900 as a result of anthropogenic climate change (van Oldenborgh et al. 2020). The recent years of repeated wildfires in the western U.S. and Canada have had devastating effects (McWethy et al. 2019). Extreme events have the potential to widen existing inequalities within and between countries and regions (UNDP 2019). In particular, synchronous extremes are risky in a globally connected world and may cause disruptions in global food production (Cottrell et al. 2019; Gaupp et al. 2020). Pandemics, like the COVID-19 outbreak and associated health responses, intersect with climate hazards and are exacerbated by the economic crisis and long-standing socioeconomic and racial disparities, both within countries and across regions (Phillips et al. 2020).

“Humanity has become a global force shaping the operation and future of the biosphere and the broader Earth system,” the report notes. “Climate change and loss of biodiversity are symptoms of the situation. The accelerating expansion of human activities has eroded biosphere and Earth system resilience and is now challenging human wellbeing, prosperity, and possibly even the persistence of societies and civilizations.”

If various forms of inequality are not addressed and new technologies not properly harnessed to restore balance to the world’s natural systems, the authors warn of increased harm in the years and decades to come.

“Equality holds communities together, and enables nations, and regions to evolve along sustainable development trajectories,” they write. “Inequality, in terms of both social and natural capitals, are on the rise in the world, and need to be addressed as an integral part of our future on Earth.”

Co-author Victor Galaz, deputy director of the Stockholm Resilience Centre, said: “As the pressure of human activities accelerates on Earth, so too does the hope that technologies such as artificial intelligence will be able to help us deal with dangerous climate and environmental change. That will only happen however, if we act forcefully in ways that redirects the direction of technological change towards planetary stewardship and responsible innovation.”

Editors’ note: It won’t be easy; from high carbon polluters using advertising to whitewash their image to insufficient infrastructure to provide clean water for many, to corporations falling short in their emissions reduction goals, it’s not only policies but the culture itself that needs to change