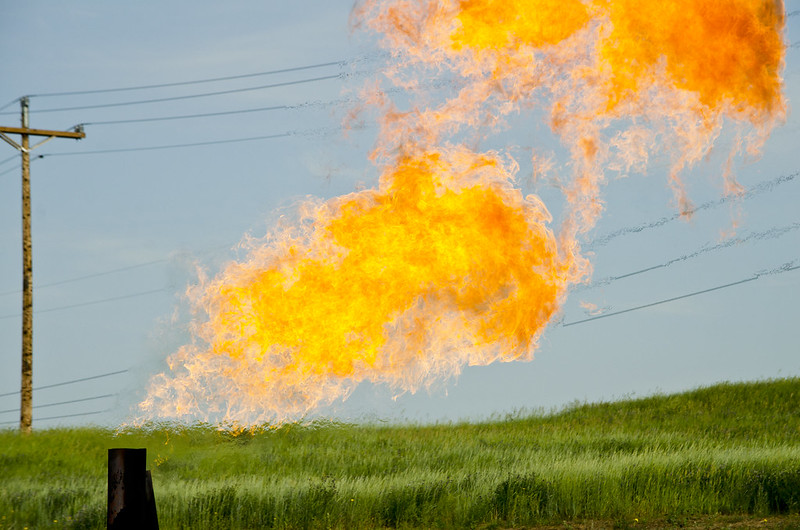 Though the methane rollback was just one of several environmental and climate policies under President Donald Trump that served the oil and gas industry, campaigners were particularly critical of the move because, as Heinrich noted, “methane has over 80 times the global warming potential as carbon dioxide in the short term.”

When the Environmental Protection Agency announced the rollback in August, Center for Biological Diversity attorney Liz Jones called the decision “mind-bogglingly stupid and destructive,” adding that “even for the Trump administration, this is an appalling new low.” That sentiment was shared by various activists and scientists.

Schumer said Thursday the Senate will take up the resolution when lawmakers return from April recess. Rep. Diana DeGette (D-Colo.) introduced a companion resolution in the House, which also has a Democratic majority. Notably, such a resolution allows for Congress to take action while avoiding the filibuster in the Senate.

The senators’ announcement came after The Hill revealed Wednesday that Heinrich and King had drafted the resolution. The outlet noted that “it would be the first rollback of Trump environmental policy Democrats target with the CRA” and “would come as lawmakers are rapidly approaching the deadline to use the technique.”

Lawmakers only have 60 legislative days to formally disapprove of and quash a regulatory action under the CRA. As The Hill reported:

The CRA was a legislative tool favored by Republicans in the early days of the Trump administration, used by a GOP-led Congress to strike down 14 regulations from the Obama era.

But Democrats have been more reluctant to use the CRA, partly due to concern over statutory language in the law that blocks the relevant agency from then crafting another rule that’s substantially similar.

However, Heinrich emphasized the importance of getting stricter emissions standards back on the books because of both the climate crisis and public health.

“In the wake of the Trump administration, there are very few Clean Air Act protections left in place to limit emissions of dangerous methane pollution from the production, processing, transmission, and storage of oil and gas in the United States,” he said. “When methane leaks from oil and gas wells, harmful carcinogens like benzene leak into the air alongside it. That means children are suffering more asthma attacks, and seniors are having trouble breathing.”

Calling the Trump-era rollback “environmental sabotage,” King charged that the Trump administration had “neglected their responsibility to protect the planet, putting the short-term interests of polluters over the long-term interests of the planet we will leave to our children and grandchildren.”

When it comes to steps we can take to address climate change, limiting methane emissions is the low-hanging fruit – it traps an immense amount of heat, and is relatively easy and cheap to capture. It is absolutely essential that we restore these limits.

Markey said that “this is an environmental justice emergency, and we have to do the congressional equivalent of calling 911 by passing this resolution of disapproval.”

The advocacy group Earthworks welcomed the resolution while also stressing that lawmakers must also do more to tackle the climate crisis.

“We thank our congressional champions for this welcomed first step towards controlling methane pollution from oil and gas production but reinstating rules from 2016 is not enough. Bolder action is urgently needed after four years of reckless Trump administration policies and feet-dragging by industry on climate,” said Lauren Pagel, Earthworks policy director. “To prevent a climate crisis President [Joe] Biden must direct the EPA to use the full force of the Clean Air Act to cut methane pollution 65% by 2025.”

Schumer, who described the methane rollback as “a dagger in the heart of efforts to address the climate crisis,” promised there is more to come, saying: “Senate Democrats said we would fight to reverse the previous administration’s illogical and devastating weakening of methane protections, and as majority leader, I am committing to using Congressional Review Act authority to do just that. This CRA is just one of many initiatives the Senate Democratic majority will undertake to address the climate crisis.

While Democrats control the Senate by the slimmest possible margin, with Vice President Kamala Harris breaking tie votes, so far there is only one other publicly known CRA effort—despite the potential for broader use by Democratic lawmakers during this congressional session to reverse Trump-era policies and deregulation.

“When workers bring credible claims of discrimination to the EEOC, they deserve a fair process that protects their rights and shields them from retaliation,” Scott told The Nation. “Unfortunately, the new rule forces the EEOC to abide by a strict formalized process that was previously struck down by the Supreme Court six years ago and would strip the EEOC of the flexibility to act in the best interests of workers. By repealing this rule, Congress will eliminate wasteful litigation that would cause substantial delays or even deny justice for victims of discrimination.”

This is really good news for anyone who believes victims of employment discrimination deserve their day in court. And it’s a really smart use of the Congressional Review Act since the EEOC is set to remain in Republican hands until 2022. https://t.co/ZFQR9rj6Zt

Murray told the outlet that “we’ve got momentum on our side to restore a fair process where workers can be heard, and that’s what we’re going to do.”

Earlier this month, the progressive advocacy group Public Citizen released a report revealing that Biden can expand the scope of his regulatory freeze memo from January 20 to include more midnight regulations issued under Trump—”many of which will harm consumers, workers, the public’s health and safety, and the environment”—because they violated the CRA.

Under the CRA, regulations only take legal effect after they are published in the Federal Register and submitted to both chambers of Congress. The report said that Public Citizen “is no fan of the CRA” and has called for its repeal, but it “is still the law, and it is quite clear that the last-minute regulatory rollbacks from the Trump administration violated the CRA in many instances.”