“We need the cooperation of the whole world and the elimination of all the barriers to the production and distribution of vaccines.” 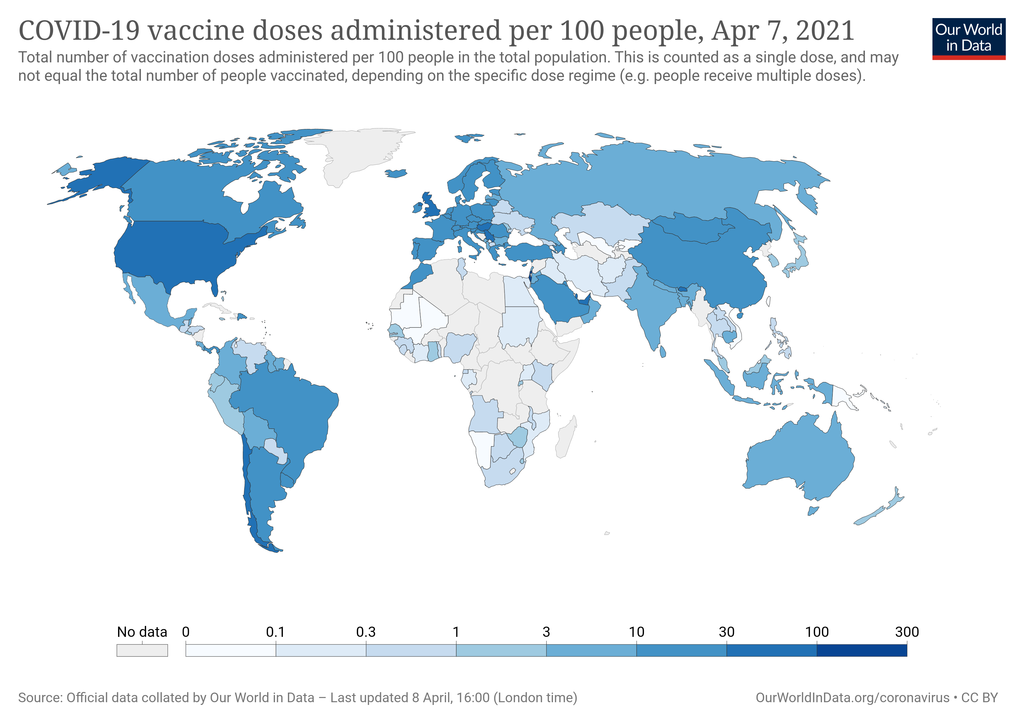 Graphic: Our World in Data/CC

The head of the World Health Organization estimated in a recent address that of the more than 700 million coronavirus vaccine doses that have been administered across the globe, just 0.2% have gone to people in low-income nations—inequity that experts warn will persist unless rich countries end their obstruction of an international effort to suspend vaccine patents.

Speaking to the media on Friday, WHO Director General Tedros Adhanom Ghebreysus warned that “there remains a shocking imbalance in the global distribution of vaccines” as pharmaceutical companies cling to their monopoly control over technology that was developed with large infusions of public money.

Tedros went on to lament the struggles of the global vaccine initiative COVAX, which he said “had been expecting to distribute almost 100 million doses by the end of March” but has instead only sent out 38 million due to “a marked reduction in supply.” COVAX has partnered with several major pharmaceutical companies, including AstraZeneca and Pfizer, in an effort to ensure access to vaccines in developing countries.

We need to come together for a #PeoplesVaccine now.https://t.co/2nZa8u0liR https://t.co/KC30vEBVpT

The Associated Press reported Saturday that “as many as 60 countries, including some of the world’s poorest, might be stalled at the first shots of their coronavirus vaccinations because nearly all deliveries through the global program intended to help them are blocked until as late as June.”

“COVAX, the global initiative to provide vaccines to countries lacking the clout to negotiate for scarce supplies on their own, has in the past week shipped more than 25,000 doses to low-income countries only twice on any given day. Deliveries have all but halted since Monday,” AP noted. “During the past two weeks, according to data compiled daily by UNICEF, fewer than two million COVAX doses in total were cleared for shipment to 92 countries in the developing world—the same amount injected in Britain alone.”

According to a recent Bloomberg analysis of vaccination data, “the world’s least wealthy continent, Africa, is also the least vaccinated. Of its 54 countries, only three have have inoculated more than 1% of their populations. More than 20 countries aren’t even on the board yet.”

The ongoing struggles of COVAX and the inadequacy of bilateral vaccine agreements have only served to heighten calls for more sweeping action at the international level to redress inequities that could prolong and intensify the global pandemic.

One effort, led by South Africa and India, to temporarily lift vaccine-related intellectual property rights has gone nowhere due to wealthy World Trade Organization members such as the United States and the United Kingdom, whose opposition has left vaccine production largely under the control of major pharmaceutical corporations.

Proponents say South Africa and India’s patent waiver—supported by more than 100 nations around the world and predictably opposed by the pharmaceutical industry—would accelerate production and distribution of doses by allowing manufacturers to replicate vaccine formulas.

We must work together to end vaccine inequity https://t.co/qRrko7Jnfr pic.twitter.com/cswe1jR2GE

Dean Baker, co-director of the Center for Economic and Policy Research (CEPR), wrote in a blog post Friday that “getting the world vaccinated is not about some feel-good gestures, like a few billion dollars for COVAX.”

“It means pulling out all the stops to produce and distribute billions of vaccines as quickly as possible. To do this, we need the cooperation of the whole world and the elimination of all the barriers to the production and distribution of vaccines,” Baker argued. “This would mean suspending intellectual property claims over these vaccines. From a moral standpoint, this should not be a tough call since governments paid for so much of the development costs.”

“What are we going to do if a new and more deadly vaccine-resistant strain develops in Zambia or Burma? I don’t want to hear another chorus of ‘who could have known?’ from our intellectuals who missed another huge one,” Baker continued. “Let’s get it right this time, even if it means having to do things a little differently. Our leaders are not forced to take a vow of incompetence.”