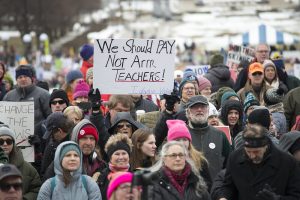 School districts in the state are already permitted to allow school employees to carry guns, but the state Supreme Court ruled a year ago that all employees need the same amount of firearm training a law enforcement agent would undergo before being armed—728 hours.

Republicans in the state legislature fast-tracked the bill to counter the ruling, with DeWine saying Thursday that the party had removed “hundreds of hours of curriculum irrelevant to school safety,” allowing teachers and other employees to more easily carry weapons.

The legislation was passed just over a week after 19 children and two adults were killed in a massacre at Robb Elementary School in Uvalde, Texas by a shooter wielding two semi-automatic rifles—the latest high-profile school shooting which has renewed urgent calls for an assault weapons ban that’s supported by more than 60% of Americans.

Meanwhile, Republicans including U.S. Sen. Ted Cruz (R-Texas) have pushed proposals to “harden” schools by making them accessible only through one door and by arming school staff.

In Ohio, H.B. 99 has been opposed by teachers’ unions, gun control advocates, and law enforcement groups.

“We aren’t trusted with the books we choose, but somehow we’re supposed to be trusted with a gun in school?” Shari Obrenski, vice president of the Ohio Federation of Teachers, said in a hearing regarding the proposal, referring to the book-banning campaign Republicans are also focusing on across the nation.

Ohio legislators trust teachers with
these but not these pic.twitter.com/Ksiog3kZKn

State Sen. Theresa Fedor, a Democrat, warned Republican lawmakers that they “will have blood on [their] hands” if the legislation leads to a shooting in a school.

“I think it’s crazy, the bill is crazy, and the people who support it—you really need to think about what you’re doing,” said Fedor.

“I think it’s crazy. This bill is crazy … Everyone in this room will have blood on your hands.”

— Ohio State Sen. Teresa Fedor (D) on House- and Senate-passed bill that would allow teachers and school staff to be armed with only 24 hours of training pic.twitter.com/oXyRnCsdWf

“Teachers should not be tasked with stopping a shooter in their schools,” said Randi Weingarten, president of the American Federation of Teachers. “Our lawmakers should be tasked with putting common-sense gun violence policy in place to do that.”