Image by Mikenorton (Own work) [CC-BY-SA-3.0 (http://creativecommons.org/licenses/by-sa/3.0)], via Wikimedia Commons

On May 12, a new subcommittee met for the first time in the Texas House of Representatives. Named the Seismic Activity Subcommittee, the first day was spent listening to testimony from local leaders, scientists and the Texas Railroad Commission about recent seismic activity and the possible links between that activity and the oil and gas industry.

We’ve covered this boom in seismic activity on numerous occasions. MNgranny’s articles When Science and Politics Collide, Corporations Win and The Town in Search of Truth tell the story of Azle, Texas. Since November 2013, at least 28 earthquakes with magnitudes between 2.1 and 3.7 have struck the area between Azle and Reno; an area that very rarely, if ever had earthquakes before last year.

Azle Mayor Alan Brundrette was one of the people to testify at the hearing. ““Our school district now conducts earthquake drills,” he said. He also told of cracking foundations and breaking water pipes in the town.

Arkansas and Ohio have both placed moratoriums on new injection wells in areas that have had recent unusual seismic activity. And in Oklahoma, the USGS recently released an earthquake warning for the state; the first ever for a state east of the Rockies. Oklahoma had 183 earthquakes of magnitude 3.0 or greater between October 2013 and April 14, 2014. Before then, the state would average two quakes of that size per year. And, since the fracking boom in Oklahoma started in 2009, the state’s had 20 quakes of 4.0 to 4.8 magnitude, as well as a 5.6 quake in the town of Prague on November 5, 2011. MNgranny discussed the Prague quake in Fracking Creates Quakes, NOT Cheaper Pump Prices! And, as a sign of how seriously Oklahoma residents are taking the recent upswing in seismic activity, 12 to 18 percent of residents now carry earthquake insurance, up from 2 to 4 percent in 2011.

So, how is Texas responding? Not so well. Researchers at Southern Methodist University are trying to gather information about injection well activity and the correlation to the increased seismic activity. However, the 12 new seismometers placed in the Azle region can’t create a full picture of what is going on underground without knowing the volumes and pressures of wastewater injections at each well. That information’s considered proprietary. As Mayor Brundrette put it; “We have a state agency that has the authority to regulate those operators, yet we can’t get everyone together to share the information we need to address the problem.”

The Texas Railroad Commission is the agency which oversees all gas and oil operations in the state, and their testimony implies that the state is in no hurry to act. Milton Rister, executive director of the Texas Railroad Commission, said “A knee-jerk reaction could have a negative impact on our economy because of the large role the oil and gas industry plays here… I think the three commissioners are aware we need to make some adjustment … but don’t want to do something we all end up regretting a year from now.”

Occupy World Writes on the other hand agrees with Lynda Stokes, the mayor of Reno, who said at the hearing; “The industry’s right to profit does not surpass our right as citizens to the quality of life we’ve come to know,”

Image from ShowMe.net, Updated by CERI, University of Memphis.

A 5.7 magnitude earthquake shook the ground near Prague, Oklahoma in 2011, accompanied by 2 other quakes registering magnitudes greater than 5.0. It was felt in 17 states. In fact, the central United States has seen an 11-fold increase in earthquakes in the past four years alone, according to Geology, a widely accepted scientific journal. The affected areas studied in the report included Arkansas, Texas, Ohio and Colorado.

On March 6, 2014, the United States Geological Survey (USGS) released a press statement indicating the Prague, OK earthquake is directly related to the injection well activity occurring in the area. Although unintentional, the evidence shows the earthquakes are human-induced. Despite this risk, authorities in Oklahoma continue to allow waste-water injection near the Wilzetta fault.

In a report from Raw Story, “The 5.7 magnitude quake in Prague followed an injection of waste-water approximately 650 feet away from the Wilzetta fault zone, a complex fault system about 124 miles in length. All three earthquakes exhibited a slip-strike motion, and did so at three different locations, indicating that three separate areas of the fault zone were activated.”

All this comes at a time that Azle, Texas remains “The Town in Search of Truth,” a story we first began with our article, “When Science and Politics Collide, Corporations Win.” We have noticed a clear reluctance of any corporate media to feature this story, as its implications are as contrary to their corporate partners as evidence of global warming and climate change. To identify corporate partners, simply observe who advertises and who appears in their commentary programs. Also take note of who is lining the pockets of politicians.

We believe all these things are related. We understand empirical science, research and discoveries to be beneficial for the human race, whether it is a cure for a horrible illness or the discovery of plate tectonics. But we are alarmed at the willingness to pick and choose science based on corporation profit lines.

When science tells us to that we are tipping the scales to the perilous point of no return through our pollution, consumption of fossil fuels, interference with genetics and food sources and our insatiable appetite to take it all right now, before anyone else can, we need to STOP. But this is when the pressure mounts and all reason leaves the discussion; it becomes arguments for deregulation, free market, corporate development and shareholder portfolios. 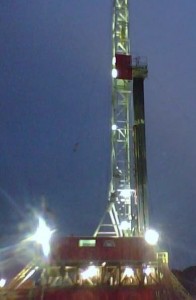 In Azle, Texas, residents gathered for a town meeting to voice concerns about the escalation of earthquakes in their area. Since November 1 of 2013, 28 earthquakes in north Texas have been recorded. The epi centers of the majority of these earthquakes are between two fracking sites.

Image by Mikenorton (Own work) [CC-BY-SA-3.0 (http://creativecommons.org/licenses/by-sa/3.0)], via Wikimedia Commons

The state officials are relying on plausible deniability. One must remember these people were elected after their campaign coffers were filled with contributions from oil and gas companies. The representatives at the meeting in Azle claimed no evidence of a correlation exists between the earthquakes and fracking.