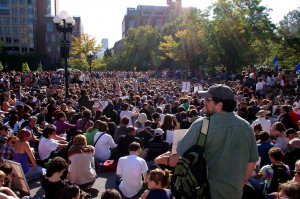 In 2011, then 23 year-old student Cecily McMillian found herself being sexually assaulted, beaten, and denied medical treatment by the New York City police department during a visit to the Occupy Wall Street demonstrations in Manhattan.

Her trial, currently underway in New York, is the last of the trials remaining for over 700 arrested protestors in the OWS movement from over two years ago. McMillan is charged with assaulting a police officer when she reacted instinctively by throwing up an elbow when she felt her breast being groped. She did not realize the perpetrator was a police officer until he began beating her in retaliation. Other officers joined in, continuing to beat her until she went into seizures. Officers then denied street medics access to McMillan while she lay on the sidewalk, waiting over 25 minutes before calling an ambulance. At one point, they did administer oxygen to her. No officer was ever charged in McMillan’s case. Photographs taken at the time of the incident show bruised ribs, arms, chest and facial injuries on McMillan.

A graduate student, she is currently in her first year of studies at The New School for Social Research. If found guilty, she faces up to seven years in prison.

Writer Chase Madar takes note of widespread local ordinances and heavy-handed police tactics like aggressive surveillance, “kettling” protestors with movable plastic barriers, arbitrary closures of public spaces and the harassment and arrest of journalists who would tell the tale. Some have enacted assembly ordinances limiting groups to four or less. To be sure, most major municipalities in America have become “militarized” in their equipment, weaponry and training as public rallies continue from various groups and organizations throughout the country.

Occupy World Writes calls on the judicial process to understand the true offenders in this case. We stand in Solidarity with Cecily McMillan and all those exercising their basic civil liberties. We believe that this court ruling will provide a clear window into whether public assembly stays a basic right or has become a criminal activity.

The United States government decries foreign governments for suppressing demonstrations and protests of the people in other nations. Ukraine, Thailand, Syria, Cambodia and the Phillippines are just the most recent examples that come to mind. Yet when the same forces are used on American soil against her citizens supposedly protected with constitutional rights, the administration and government close their eyes and tighten their lips.

In a report from The Guardian covering McMillan, an examination of the reaction of police departments within the United States to demonstrations like those of the Occupy movement reveals an evisceration of the basic right to peaceful assembly. When compared to other developed countries, America’s statistics belie the perception. “The US has the highest incarceration rate in the world. In 2012, the incarceration rate in the United States (707 per 100,000) was about one and a half times that of Russia (472) and over triple the peak rate of the old East Germany (about 200). The incarceration rate for black men in the US is over five times higher than that of the Soviet Union at the height of the gulag.”

Welcome to the Prison Industrial Complex. Enjoy your stay.