‘This much is clear: After millions of dollars were pledged by the oil company to the Clinton Foundation, Secretary Clinton abruptly changed her position on the controversial U.S.-Colombia trade pact.’ 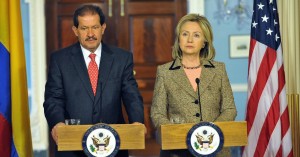 Then-Secretary of State Hillary Clinton speaks with Colombian Vice President Angelino Garzon in January, 2011. In her remarks, Clinton praised Colombia’s efforts in “reaching out to civil society to add their voices to a national conversation about human rights and labor rights.” (Photo: US State Department/flickr/cc)

A new investigative look at the ties between big business interests in Colombia, former Secretary of State Hillary Clinton, and her family’s charitable foundation are raising troubling questions about the role that corporate trade deals and big oil may have played in softening the powerful Democrat’s position on human rights in the South American country.

During her time heading the State Department, presumptive 2016 presidential nominee Clinton stayed silent on reports of violence and threats against labor activists in Colombia, even as her family’s “global philanthropic empire” was developing—and benefiting from—private business ties with a major oil corporation accused of worker-intimidation in the country, according to new reporting published Thursday by International Business Times. END_OF_DOCUMENT_TOKEN_TO_BE_REPLACED