Turkey’s HDP, civil society launch campaign against lifting immunities: “More than 250 civil society organizations (CSOs), professional chambers and associations have released a joint declaration against a government-led bill which would strip some parliamentarians of their immunity from prosecution, with the Kurdish-problem-focused Peoples’ Democratic Party (HDP), the main target of the bill, marking the declaration as a starter for a campaign against “the palace’s coup.” 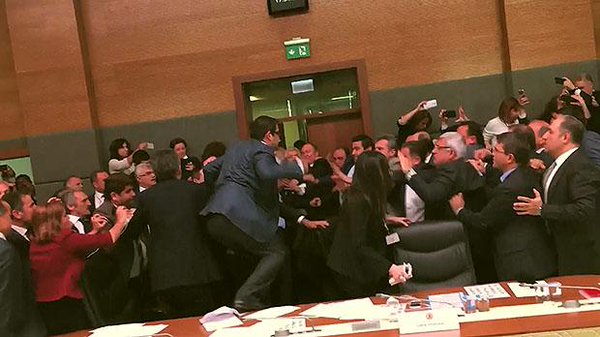 Fight breaks out in Turkish Parliament as discussion over stripping MPs of immunity, May 3, 2016. Image via Twitter.

The following letter was published by the HDP co-chairs, Selahattin Demirtaş and Figen Yüksekdağ, following the volatile debate in parliament that dissolved into fist fights and brawling. It appears to have been released on or after May 5, 2016.

Turkey is rapidly moving away from democracy and the rule of law due to President Erdoğan and the Justice and Development Party (AKP) government’s increasing authoritarian policies – particularly with respect to the Kurdish issue. At multiple platforms we have expressed grave concerns that such antidemocratic policies are dragging the country into political violence, social polarization, and socio-economic instability. We have also emphasized that the only way out of these circumstances is to resume the peace process with the Kurdish movement and broaden the field of democratic politics. Unfortunately, Turkey is moving full force in the opposite direction despite ongoing negotiations for accession to the EU.

Turkey’s already weak parliamentary democracy is under a new totalitarian attack. President Erdoğan and the AKP government have virtually subordinated the Turkish judiciary to the executive by several governmental and legal interventions over the past two years. Now, a recent motion by the government to lift legislative immunity seeks to oust political opposition from the parliament. If passed, this motion would suspend Article 83 of the Constitution, which guarantees parliamentary immunity, through addition of a provisional clause. Lifting parliamentary immunity with such an anti-Constitutional move would extend Erdoğan-AKP bloc’s monopolistic grip to the legislative body.

We view this motion as a political coup attempt to completely destroy the separation of powers by subordinating the legislative to the executive and leaving the former to the mercy of a thoroughly politicized and biased judiciary. If successful, this coup would be a most crucial step for Erdoğan to replace Turkey’s parliamentary democracy, which he has twice declared “de facto over,” with an absolutist presidential system in which the legislative, executive and judiciary powers are virtually monopolized by the President himself.

As of April 21, 2016, the summaries of court proceedings of 131 deputies had been sent to the parliament. If the AKP’s motion passes, these deputies will lose their immunity. Of these, 26 are AKP deputies, 51 are Republican People’s Party (CHP) deputies, 46 are Peoples’ Democratic Party (HDP) deputies, 7 are Nationalist Action Party (MHP) deputies, and 1 is an independent deputy. The AKP government represents the mixed profile of these deputies as proof of the non-partisan intention of the motion. This is simply a pretense.

What this motion seeks to destroy is the HDP opposition in the parliament. Despite the antidemocratic %10 election threshold, mass arrest and imprisonment of thousands of our party executives, members and electorate, hundreds of physical attacks on our offices, and constant criminalization and scapegoating, the Erdoğan-AKP bloc failed to prevent us from entering the parliament in the elections on June 7th and November 1st, 2015. Lifting our immunity is their latest move to exclude the HDP from the parliament. In fact, in his many public statements regarding the motion, President Erdoğan did single out HDP deputies and criminalized us as “supporters of terrorism” with groundless accusations.

The HDP is a progressive party established by Kurdish political opposition and other under-represented ethno-religious populations, women, labor and ecologist/environmentalist groups who came together around values of pluralist democracy, peace, justice and equality. Conceiving the repression of Kurdish people’s cultural and political rights as a systemic problem of the monolithic nation-state formation in Turkey, we uphold an integrated approach to the struggle for equality and freedom of all repressed sectors of Turkey’s populace. The profile of our parliamentary group, including Kurdish, Turkish, Armenian, Syriac, Alevite and Ezidi representatives as well as democrat Muslims, women, labor and ecological activists, reflects clearly our democratic political commitments.

Let us remind you that the revocation of parliamentary immunity and imprisonment of Democracy Party’s (DEP) Kurdish deputies in 1994 under the pretext of “fighting terror” was both a symptom and facilitator of one of the most violent periods of the Kurdish conflict in Turkey. In the totalitarian turn that Turkish political system has recently taken, wherein anybody critical of the Erdoğan-AKP bloc is labeled as a “terrorist” or “supporter of terrorism,” the closure of parliamentary representation to political opposition will render Kurds and other marginalized peoples of Turkey even more vulnerable to grave forms of state violence and repression. As it is, the tutelage of the executive over the judiciary emboldened President Erdoğan to even demand revoking the citizenship of his political critics ranging from HDP deputies and elected Kurdish mayors to journalists, pro-peace academics and social media users. Lest the parliament is brought under the control of the executive, we suspect Erdoğan’s next move would be to demand “a state without citizens.”

The HDP will continue its decisive struggle against authoritarian policies that the Erdoğan- AKP bloc carries out to annihilate democratic life in Turkey. Given the injustices in court cases against journalists, academics, elected Kurdish mayors or the citizens alleged to have “insulted the President,” we do not expect the courts, which are under heavy control of President Erdoğan, to deliver justice to our deputies. We will not surrender to authoritarianism and will continue our democratic struggle against all kinds of tyrannies.

In this critical conjuncture for Turkey’s democracy and a peaceful resolution of the Kurdish conflict, we invite all persons and institutions embracing universal democratic values to take immediate and concrete action, strongly raise their voice, and stand in solidarity with our struggle against the intended political coup against the parliament and the HDP.