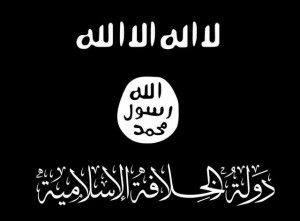 The people of Lebanon are rising up to protest against the Islamic State, and in particular the alleged beheading of a Lebanese soldier by ISIS – by challenging the world to burn ISIS flags and post photos of them doing so. But there are those in the government of that country that oppose this action, claiming the flags are religious symbols, which one may not desecrate according to Lebanese law, according to a report in the JewishPress.com.

The ISIS flag contains a religious writing at the bottom that translates to “There is no god but Allah, and Mohammad is the messenger of Allah.”

The controversy began August 30 when 3 youths posted pictures of themselves burning the ISIS flag in Sassine Square in Ashrafieh. The website Al-Akhbar reports that Lebanon’s Justice Minister Ashraf Rifi is now demanding the arrest of anyone who burns the ISIS flag. MP Ibrahim Kanaan said he would represent the group of three boys in court, who were the first to burn the ISIS flag, if the prosecutor charges them.

The concept is starting to go viral in Lebanon, and it has some Islamists worried.

We do not intend any offense to Islam or to Muslims throughout the world. As one of the world’s oldest and largest religious faiths, Islam is both divine and deserving of all respect. As non-Muslims, we apologize in advance for any misunderstanding.

It matters not what the government of Lebanon – or any other country – has to say about the world’s readiness to reject this group and all it represents. Islam teaches that religious faith and purity is not achieved in conversion through coercion. To that regard, ISIS is not representative of Islam any more than Ghandi is representative of violent uprising.

It also occurs to us that when ISIS uses this symbolic religious writing on their flag, it does so in violation of the very faith it claims to observe. While killing innocent men, women and children, raping and selling others, and burying still more alive, the barbaric actions are neither religious or holy. We believe ISIS to be the very spawn of the devil they claim to seek to destroy.

JOIN US WITH THE REST OF THE WORLD IN REJECTING ISIS TODAY!