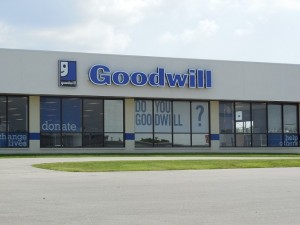 By ParentingPatch (Own work) [CC-BY-SA-3.0], via Wikimedia Commons

Harold and Sheila Leigland are blind. They live in Great Falls, Montana, where 66-year-old Harold, a former massage therapist with a college degree, hangs clothes at the Goodwill store for $5.46 per hour. Last summer, Sheila was forced to quit her position at Goodwill doing the same job as Harold when her wage was dropped from $3.50 to $2.75 per hour following knee surgery.

Every six months, Harold is subjected to time studies to determine if his wage can be lowered or raised. Sheila explains that this was the most humiliating and stressful part of her previous position at Goodwill. She felt that the tests are made more difficult to justify lowering wages, despite consistencies workers show in job performance.

They actually have it quite good in Great Falls at the Goodwill store. Some states pay their disabled workers as little as .22 cents and hour, with one state reporting wages as low as ONE CENT per hour. In case you think (or hope) there must be a law being broken here, sadly we must inform you that this is entirely legal. Due to a 1938 loophole in the law which has never been corrected, modernized or abolished altogether, employers can hire disabled workers for less than minimum wage. Currently, estimates are that over 216,000 workers are affected.

Section 14(c) of the FLSA authorizes employers, after receiving a certificate from the Wage and Hour Division, to pay special minimum wages wages less than the Federal minimum wage to workers who have disabilities for the work being performed. “A worker who has disabilities for the job being performed is one whose earning or productive capacity is impaired by a physical or mental disability, including those relating to age or injury. Disabilities which may affect productive capacity include blindness, mental illness, mental retardation, cerebral palsy, alcoholism and drug addiction.”

FOH Chapter 64, Employment of Workers with Disabilities at Special Minimum Wages under Section 14(c), provides general guidance on the administration and enforcement of this program. It is over 100 pages in length.

Goodwill is not the only employer to use this loophole to pay less than federal minimum wage to disabled workers. Most employers taking advantage of the loophole are charitable organizations, where CEO earnings are often upward of a half million dollars.

Mental illness includes depression, panic disorder and PTSD. So for all practical purposes, it is completely legal for a veteran to return from service and finally find employment while attempting to adjust back to civilian life, only to be paid as little as the employer determines to pay. If a victim of a car accident survives the injuries but remains disabled for life, they can look forward to never being able to earn even the federal minimum wage. If an aging worker wants to continue working, the employer can reduce the wage to an unsustainable level, forcing the worker to quit.

Goodwill includes in their mission statement that it is their goal “to eliminate barriers to opportunity and help people in need reach their full potential through learning and the power of work.” We do not believe that should include exploitation of disabled workers, and call on individuals to make a personal choice to boycott Goodwill until all employees are paid the same federal minimum wage, regardless of disabilities.

Occupy World Writes calls on legislators in Washington to correct this stain on America’s spirit of fairness and non-discrimination in her employment laws. We encourage those who agree that Section 14(c) of the FLSA needs to be abolished join with other voices by signing the petition at the link below. We also strongly suggest writing or calling your representative or congressional member and ask them to correct this wrong.