On Tuesday, November 4, Iguala Mayor Jose Luis Abarca and his wife, Maria de los Angeles Pineda were arrested in Mexico City. Described as the “probable mastermind” in the disappearance of the students, Abarca was charged with six counts of aggravated homicide and one count of attempted homicide a week later. END_OF_DOCUMENT_TOKEN_TO_BE_REPLACED

While we at Occupy World Writes recognize that our media has pretty much given up on reporting the news, sometimes we’re still surprised by their lack of coverage of vital stories happening around the world. Instead of providing us with an unbiased accounting of current events, they focus instead on the sensational.

Our news broadcasts are filled with stories about Ebola, yet the chances of an Ebola epidemic occurring in the US are close to nonexistent. They cover things such as Occupy Wall Street and the Ferguson protests when they first start, but then ignore them as soon as a new shiny story comes around, even though the protests are still happening and the issues that started them are still present. And, sometimes, they almost completely skip the story, even though it’s happening right next door. 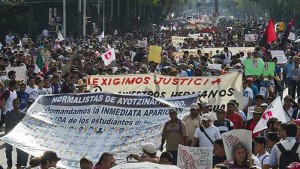 Protest demanding the resignation of the governor of Guerrero, Angel Aguirre. Photo via www.lainfo.es

A month ago tomorrow, a group of students from Ayotzinapa Normal School – a teacher training college in Ayotzinapa, Guerrero, Mexico – traveled to the nearby city of Iguala to protest against what they said were discriminatory hiring practices. Police opened fire on the buses the students were travelling in, killing three of them and three more people in nearby vehicles. 43 students were seen being loaded into police vans; that’s the last time they were seen.

The speculation around the city was that the police reaction was related to the mayor’s wife having an event in the city on that day; police officers had been told to prevent the students from disrupting her event. Which brings us to the next twist in the story; the mayor’s wife, Maria de los Angeles Pineda Villa, is part of the Pineda family. The Pineda family is known to have controlled the drug trafficking in Guerrero for the Sinaloa Cartel, and were associates of a group known as Guerreros Unidos (United Warriors), a spinoff of the criminal group Los Beltran Leyva.

After the leader of Guerreros Unidos revealed that the police had handed over some of the students to the group and ordered their executions, dozens of police officers were arrested. The mayor was fired, and he and his wife went into hiding. Last week, the State Capitol building in Chilpancingo was heavily damaged by fire in demonstrations demanding that the governor step down. Which brings us to this week.

On Wednesday, protesters burned the Iguala city hall, and tens of thousands of people marched through Mexico City and other cities in protests over the disappearance of the students and the failure of the government to find them. Also on Wednesday, Mexico’s Attorney General Jesús Murillo Karam ordered the arrest of Jose Luis Abarca (the former mayor), his wife, and an aide, alleging they masterminded the attack. On Thursday, the governor of Guerrero, Angel Aguirre, stepped down.

Since the disappearance of the students, a dozen mass graves with remains of burned and dismembered bodies have been found in the area, but authorities claim none of the bodies were the missing students. As horrible as this sounds, it’s just a drop in the bucket.

Around 26,000 people have gone missing in the last eight years in Mexico, according to a list compiled by the administration before the present one headed by Mexico’s President Enrique Peña Nieto. The level of corruption and collaboration between the army police and the cartels is staggering. And, to a large degree, we’re responsible. The “war on drugs” is what gave birth to the cartels; without the huge profits that the drug trade generates, there wouldn’t be the violence and corruption perpetuated by the cartels and gangs throughout Latin America, and we wouldn’t see anywhere as much corruption in those countries’ governments and security forces that we do now.

What can we as a nation do? Put in place a sensible drug policy. Instead of attempted nation building in the Middle East, why don’t we worry about closer to home instead? Put the money we spend in Iraq, Afghanistan and the like into building up our neighbors in Latin America. Make it so the citizens of Latin America have other options to make a good living and feed their families other than working for the cartels. It would be a win/win for everybody; not only would the cartels’ grip on those countries and the violence resulting from that diminish greatly, but we’d have fewer people crossing our border in search of a better, safer life.