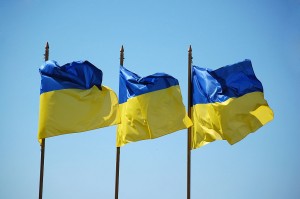 On January 8, we published “Honor and Dignity,” a story that noted the difference in the observance of Iraq’s Army Day between the bulk of Iraq and those within Kurdistan, the later of whom observed the losses to the Peshmerga forces suffered while under the rule of Saddam Hussein.

Today, we again observe a country caught between very opposing views as we mark the 23rd anniversary of Ukraine’s independence. No one can argue their first couple of decades have been challenging.

Meanwhile, according to a report in The Guardian, “In Donetsk, where the suburbs of the city continue to be subjected to heavy shelling on a nightly basis, separatist fighters organised their own parade as a riposte to Kiev, displaying destroyed Ukrainian military hardware in a central square and forcing captured Ukrainian soldiers to march through the centre of the city at gunpoint. Around 60 dejected looking prisoners were made to take part, as the crowd screamed “Fascists!” at them. A municipal cleaning vehicle tailed them, washing down the streets where they had walked to “cleanse” them.”

These activities follows Saturday’s action of Russia pulling the trucks in their “humanitarian aid convoy” back across the Russian border. The convoy was delayed at the border for over a week while “discussions” about the contents and inspection of the trucks were waged. Russia had decided to move the trucks toward Luhansk despite lacking Ukraine’s authority to cross the border, resulting in Ukraine declaring the convoy an invasion. Russia has continued to build troops and military equipment in larger and larger areas within a stone’s throw of the eastern border of Ukraine.

President Putin has always told the world what he is doing – by making statements of what he is not doing. When he invaded the Crimea, he did so by telling us he would only protect “pro-Russian civilians” while planning to take the jewel of the Black Sea the entire time. When he invaded Georgia, he did so by saying he would only do so to protect “pro-Russian civilians,” and decided to stay. We think he has worn out his welcome in all places of aggression he has exerted on the borders of sovereign states that surround his country.

We congratulate Ukraine in the celebration of 23 years of independence. The people of Ukraine deserve to make their path forward as a people without the influence of “pro-Russian separatist” that are suspect of crossing the border to wage their “pro-Russian” agenda on a people who have previously had no reason to reject this portion of their historical and ethnic past.