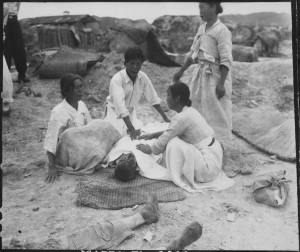 Kim Jong Un is making quite a name for himself as he steps onto the international stage as Supreme Leader of North Korea. So much so, in fact, that he is now the recipient of a letter from the U.N. Human Rights Council Commission of Inquiry.

After a year long investigation involving interviews, photographs and other clear evidence, the Commission released a 400-page report detailing crimes against humanity so horrific they are compared to the worst of Nazi Germany and the Russian gulag. “The gravity, scale and nature of these violations reveal a state that does not have any parallel in the contemporary world,” the report said.

The letter to Kim Jong Un was to inform him of their referral of the matter to the International Criminal Court (ICC). This was “to render accountable all those, including possibly yourself, who may be responsible for the crimes against humanity referred to in this letter and in the commission’s report.”

Confirmation of no less than four prison camps were identified. The camps have reportedly diminished in size, but further investigation found this to be due to starvation, torture and execution of the inmates held there. The report added: “The unspeakable atrocities that are being committed against inmates of the ‘kwanliso’ political prison camps resemble the horrors of camps that totalitarian states established during the 20th century.

Citizens of North Korea live a daily life of fear. Torture, rape, beatings, starvation and disappearances are everyday occurrences. In addition to being forced to drown their infants, citizens have also been “given forced abortions and forced to dig their own graves before being murdered with hammers by guards,” the report said. “The institutions and officials involved are not held accountable. Impunity reigns.”

The report also warned China that it may be “aiding and abetting crimes against humanity” with its policy of forcibly repatriating North Koreans who fled across its borders.

China has a vested interest in opening trade to gain access to rare earth minerals that are abundant within North Korea and that have largely not been utilized in the general world market. Rare earth minerals are used in the manufacturing of high-tech products such as cell phones and electronic devices.

North Korea said it “categorically and totally rejects the report,” which it claims was based on faked material.