‘Not since 2003 have I witnessed anything as supine and uncritical as the CIA-worshipping stenography that has been puked forward this week.’ 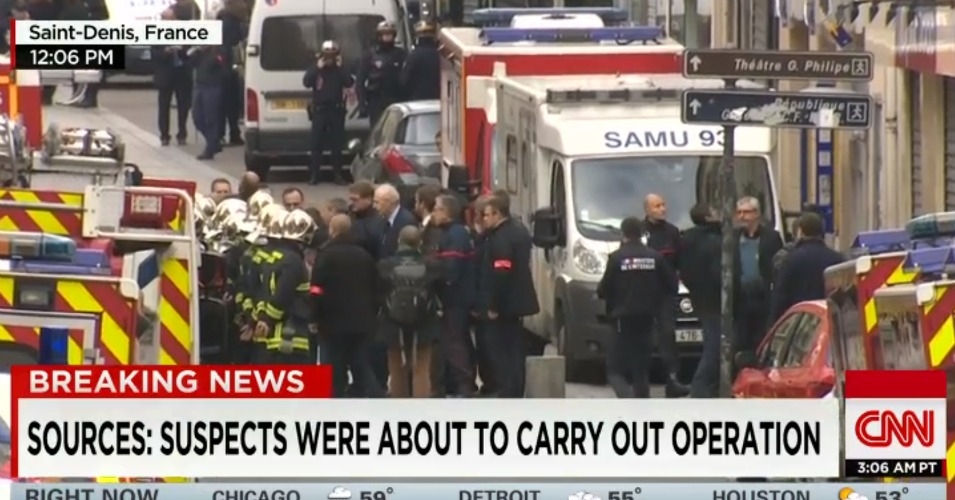 The 24/7 coverage, marked by speculation and sensationalism, is only helping the media conglomerates. (Image: CNN Screenshot)

Just as they did in the wake of 9/11, corporate media outlets—led by cable news networks—are spreading hysteria, fueling anti-immigrant sentiment, and beating the drum for war by providing “context-free coverage of terror,” as one analyst put it this week.

The 24/7 coverage of Friday’s attacks in Paris and their aftermath, marked by speculation and sensationalism, is only helping the media conglomerates.

According to Deadline: “Fox News Channel and CNN both logged their biggest primetime crowds of the year, excluding presidential debates, when viewers tuned in to learn about the attacks in Paris on Friday that killed at least 129 people and injured hundreds more. The two cable news networks traded hourly wins in the news demo that night.”

But wall-to-wall “analysis”—bereft of actual facts or nuance—does little for the viewer, wrote Jim Naureckas of Fairness and Accuracy in Reporting (FAIR) on Tuesday. And it’s part of a historical pattern that only perpetuates war and conflict.

“The outpouring of no-context, ahistorical sympathy after 9/11 helped pave the way for a violent reaction that killed in Iraq alone roughly 150 times as many people as died in Lower Manhattan that day—an opportunistic catastrophe that did more to mock than avenge those deaths,” Naureckas argued.

Political analyst and media critic Heather Digby Parton, writing at Salon on Tuesday, agreed that the media has been complicit in pushing problematic foreign policy.

“It was well documented that during the run-up to the Iraq war there was tremendous pressure coming from the executive suite of the news networks to cheerlead for the administration,” she argued. “Those who resisted were marginalized and fired if they refused to go along. It’s unlikely that the word went forth on Saturday that reporters should get on a war footing and issue demands that the president use ‘the greatest military in the world’ to ‘take out these bastards.’ But they don’t have to say it explicitly do they? Everyone knows the drill.”

“There is no doubt the Republicans are getting ready to launch a full blown campaign of paranoid bloodlust which, if successful, would have devastating consequences,” Parton concluded. “The media were willing recruits in their cause fifteen years ago. Let’s hope they gather their wits about them before they take us down that dangerous road again.”

And it’s not just cable news networks that are the culprits.

While he praised a New York Times editorial on Wednesday that “mercilessly shames the despicable effort by U.S. government officials to…exploit the Paris attacks to advance long-standing agendas,” The Intercept‘s Glenn Greenwald criticized the Times‘ overall news coverage for failing to address how:

… particularly after a terror attack, large parts of the U.S. media treat U.S. intelligence and military officials with the reverence usually reserved for cult leaders, whereby their every utterance is treated as Gospel, no dissent or contradiction is aired, zero evidence is required to mindlessly swallow their decrees, anonymity is often provided to shield them from accountability, and every official assertion is equated with Truth, no matter how dubious, speculative, evidence-free, or self-serving.

“Like many people, I’ve spent years writing about the damage done by how subservient and reverent many U.S. media outlets are toward the government officials they pretend to scrutinize,” Greenwald continued. “But not since 2003 have I witnessed anything as supine and uncritical as the CIA-worshipping stenography that has been puked forward this week. Even before the Paris attacks were concluded, a huge portion of the press corps knelt in front of the nearest official with medals on their chest or who flashes covert status, and they’ve stayed in that pitiful position ever since.”

He added: “The leading cable news networks, when they haven’t been spewing outright bigotry and fear-mongering, have hosted one general and CIA official after the next to say whatever they want without the slightest challenge. Print journalists, without the excuse of the pressures of live TV, have been even worse: article after article after article does literally nothing other than uncritically print the extremely dubious claims of military and intelligence officials without including any questioning, contradiction, dissenters, or evidence that negates those claims.”

Without real analysis and historical context, we are doomed to repeat the mistakes of the past, said Rania Masri, associate director of the Asfari Institute for Civil Society and Citizenship at the American University in Beirut, on Oregon’s KBOO radio this week.

“With that knowledge and understanding that we should look at what the French president is saying when he calls for—and I quote—a ‘pitiless war’,” she said. “Who will die next….given that it seems that the French government is unfortunately going to follow in the footsteps of the U.S. government?”

“Hundreds upon hundreds of Iraqis have been dying in Iraq every month since the U.S. invasion in 2003,” she said. “That recognition is criticial. Because we need to understand ISIS was born out of Iraq. ISIS was not born out of Syria. It was born from the U.S. invasion and occupation of Iraq. It was that anger, that humiliation, that destruction of Iraq, that fueled the environment that led to ISIS.”

What these times demand, Masri declared, is the “liberation of the mainstream press from the corporate press…so that the media can return to its original objective, which is to inform, so we can become a more educated populace—not to entertain us and not to create more sensational journalism to empower our xenophobia.”