Editorial Note: Occupy World Writes has selected our 2016 Person of the Year. Our criteria is based on contributions toward uniting various peoples for a common cause, gaining world attention for that cause, and through pressure from these gains, has been able to affect change for the united people’s concern.

In 2016, we can think of no better example than that of Sacred Stone Camp co-founder LaDonna Brave Bull Allard. Through her leadership, we now all appreciate the message that “Water Is Life.” Without her, a black snake would already be pumping poison under the sacred waters of Lake Oahe.

We honor you, LaDonna, by presenting here a story told in your own words. Thank you for your gifts to all of us; may we all learn by the example you have shown. 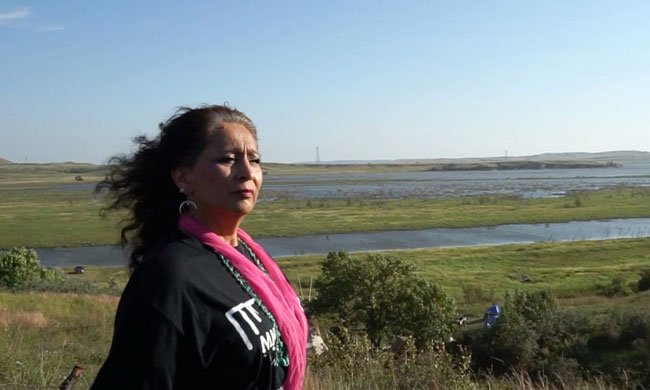 LaDonna Brave Bull Allard at Sacred Stones camp along the banks of the Cannonball River. Photo by Kat Eng.

On this day, 153 years ago, my great-great-grandmother Nape Hote Win (Mary Big Moccasin) survived the bloodiest conflict between the Sioux Nations and the U.S. Army ever on North Dakota soil. An estimated 300 to 400 of our people were killed in the Inyan Ska (Whitestone) Massacre, far more than at Wounded Knee. But very few know the story.

As we struggle for our lives today against the Dakota Access pipeline, I remember her. We cannot forget our stories of survival.

Just 50 miles east of here, in 1863, nearly 4,000 Yanktonais, Isanti (Santee), and Hunkpapa gathered alongside a lake in southeastern North Dakota, near present-day Ellendale, for an intertribal buffalo hunt to prepare for winter. It was a time of celebration and ceremony—a time to pray for the coming year, meet relatives, arrange marriages, and make plans for winter camps. Many refugees from the 1862 uprising in Minnesota, mostly women and children, had been taken in as family. Mary’s father, Oyate Tawa, was one of the 38 Dah’kotah hanged in Mankato, Minesota, less than a year earlier, in the largest mass execution in the country’s history. Brigadier General Alfred Sully and soldiers came to Dakota Territory looking for the Santee who had fled the uprising. This was part of a broader U.S. military expedition to promote white settlement in the eastern Dakotas and protect access to the Montana gold fields via the Missouri River.

As my great-great-grandmother Mary Big Moccasin told the story, the attack came the day after the big hunt, when spirits were high. The sun was setting and everyone was sharing an evening meal when Sully’s soldiers surrounded the camp on Whitestone Hill. In the chaos that ensued, people tied their children to their horses and dogs and fled. Mary was 9 years old. As she ran, she was shot in the hip and went down. She laid there until morning, when a soldier found her. As he loaded her into a wagon, she heard her relatives moaning and crying on the battlefield.  She was taken to a prisoner of war camp in Crow Creek where she stayed until her release in 1870.

Where the Cannonball River joins the Missouri River, at the site of our camp today to stop the Dakota Access pipeline, there used to be a whirlpool that created large, spherical sandstone formations. The river’s true name is Inyan Wakangapi Wakpa, River that Makes the Sacred Stones, and we have named the site of our resistance on my family’s land the Sacred Stone Camp. The stones are not created anymore, ever since the U.S. Army Corps of Engineers dredged the mouth of the Cannonball River and flooded the area in the late 1950s as they finished the Oahe dam. They killed a portion of our sacred river.

I was a young girl when the floods came and desecrated our burial sites and Sundance grounds. Our people are in that water.

This river holds the story of my entire life.

I remember hauling our water from it in big milk jugs on our horses. I remember the excitement each time my uncle would wrap his body in cloth and climb the trees on the river’s banks to pull out a honeycomb for the family—our only source of sugar. Now the river water is no longer safe to drink. What kind of world do we live in?

Look north and east now, toward the construction sites where they plan to drill under the Missouri River any day now, and you can see the old Sundance grounds, burial grounds, and Arikara village sites that the pipeline would destroy. Below the cliffs you can see the remnants of the place that made our sacred stones.

Of the 380 archeological sites that face desecration along the entire pipeline route, from North Dakota to Illinois, 26 of them are right here at the confluence of these two rivers. It is a historic trading ground, a place held sacred not only by the Sioux Nations, but also the Arikara, the Mandan, and the Northern Cheyenne.

Again, it is the U.S. Army Corps that is allowing these sites to be destroyed.

The U.S. government is wiping out our most important cultural and spiritual areas. And as it erases our footprint from the world, it erases us as a people. These sites must be protected, or our world will end, it is that simple. Our young people have a right to know who they are. They have a right to language, to culture, to tradition. The way they learn these things is through connection to our lands and our history.

If we allow an oil company to dig through and destroy our histories, our ancestors, our hearts and souls as a people, is that not genocide?

Today, on this same sacred land, over 100 tribes have come together to stand in prayer and solidarity in defiance of the black snake. And more keep coming. This is the first gathering of the Oceti Sakowin (Sioux tribes) since the Battle of the Greasy Grass (Battle of Little Bighorn) 140 years ago. When we first established the Sacred Stone Camp on April 1 to stop the pipeline through prayer and non-violent direct action, I did not know what would happen. But our prayers were answered.

We must remember we are part of a larger story.  We are still here.  We are still fighting for our lives, 153 years after my great-great-grandmother Mary watched as our people were senselessly murdered. We should not have to fight so hard to survive on our own lands.

My father is buried at the top of the hill, overlooking our camp on the riverbank below. My son is buried there, too. Two years ago, when Dakota Access first came, I looked at the pipeline map and knew that my entire world was in danger. If we allow this pipeline, we will lose everything.

We are the river, and the river is us. We have no choice but to stand up.

This article is republished under a Creative Commons Attribution-NonCommercial-NoDerivatives 4.0 International License.

If you want to know more about LaDonna, we recommend you start with this article.