“If their organization only supported candidates who firmly pledged no PAC money, their contributions could breathe much-needed life into grassroots campaigns. Instead it looks more like an intentional obfuscation.” 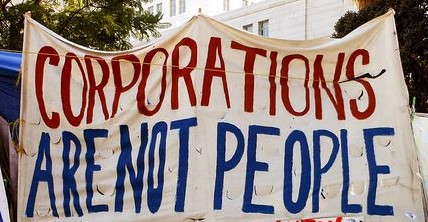 But a closer look at the candidates ECU endorses and funds reveals that the organization frequently uses its vast resources to reinforce the poisonous status quo. END_OF_DOCUMENT_TOKEN_TO_BE_REPLACED

Today marks the fifth anniversary of the Citizens United v Federal Election Commission decision. In this landmark case, the Supreme Court ruled that independent political expenditures by non-profit corporations are protected under the First Amendment and not subject to restriction by the government. The ruling has also extended to for-profit corporations, unions and other organizations.

Mind you, this doesn’t mean that corporations can contribute directly to candidate campaigns; that is still illegal under Federal law. What it does do is prohibit the government from restricting political expenditures by corporations and unions other than direct contributions to individual campaigns.

END_OF_DOCUMENT_TOKEN_TO_BE_REPLACED

Last Friday, we ran a piece on the The Democracy for All Amendment. This wasn’t the first time we’ve touched on Citizens United and its impact on our politics and policies; we ran a piece back in January proposing that our Congressthings wear the logos of their “sponsors” at all public engagements and while conducting the business of politics. But, last Friday’s post was especially timely, considering that a procedural vote was scheduled for Monday.

We pointed out the inherent flaws in the bill that went before the Senate, especially when compared to HJ Res 29, which is a comprehensive resolution introduced at the behest of the grassroots organization Move to Amend.  First of all, the bill didn’t address transparency in the campaign contribution process. Secondly, it was designed to be passed with a companion bill, The People’s Rights Amendment, that defined the legal status of a corporation as far as constitutional rights went. We questioned whether the two bills instead of the one all-encompassing bill strategy was a smokescreen – pass one and we’d be so happy that one got through that we won’t notice that the other’s going nowhere, when both are needed the way that they’re written.

Monday’s procedural vote almost gave us reason to be hopeful; the Senate voted 79-18 to let it advance to the floor. However, then the corporate and big money spin machine went to work, and we heard such absurdities as a constitutional amendment to overturn Citizens United was an attempt to repeal the First Amendment. Our favorite psychopath from Texas, Ted Cruz, went as far as to claim “Saturday Night Live” creator Lorne Michaels could be thrown in jail if the amendment passed, as according to him, the amendment would outlaw political speech by corporations. Of course, Teddy knows it does nothing like that at all; yet that and other such absurdities were spouted as gospel by those on the right to ramp up the paranoia among their followers. Then came yesterday’s vote. 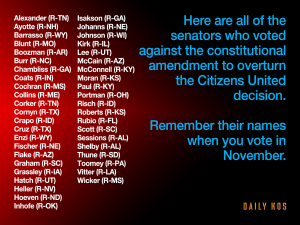 We hoped that we would be wrong in our prediction of what would happen, but alas, it was not to be. In a completely partisan voice, the Senate voted 54-42 to pass this amendment. However, since this is the modern Senate where everything besides confirmation of nominees to various posts requires 60 votes to pass instead of a simple majority, the bill won’t go forward to the House. Once again, the Republicans in the Senate paid more heed to the corporations putting lobbyist money in their pockets than to listen to the American people.

We could not help but note this vote was taken on 9-11, when most media outlets would be paying very little attention to what the Senate was doing. So, once again, while we were distracted, our elected officials did their utmost to screw we the people out of having any say in our government.

So, what can we do? Is it game over – have they won? Absolutely not!

Be an active participant in the process, and not a passive watcher. Get involved with Move to Amend. Let your Congressthings in both the House and Senate know that you’re watching; remind them that they work for you, and not the other way around. Get out and vote in November. Just do it.

America’s future generations will thank you… 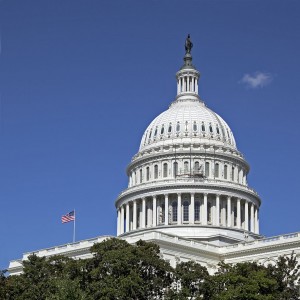 The United States Capitol building, Washington, D.C. Date 2010. From the Carol M. Highsmith Archive at the Library of Congress, via Wikimedia Commons.

Next Monday, September 8th, will mark a feel-good moment in this waning U.S. Senate session, when it holds a procedural vote on reforming campaign finance. Nothing will come of the vote this time—but its occasion is an opportunity to reflect on what’s important the next time we have a real stab at neutering the fallout from recent relevant Supreme Court decisions, most notably Citizens United v. FEC and McCutcheon v. FEC.

The vote will occur on a joint resolution called The Democracy for All Amendment (SJ Res 19)  (It’s “joint” because an identical resolution was introduced in the House of Representatives, HJ Res 20, though no vote is scheduled there.)

SJ Res 19 is the first step toward a Constitutional amendment that asserts Congress’ and the states’ right to control elections financing despite the Supreme Court’s decisions enabling the opposite for corporations and wealthy persons, both of whose money the court views as speech itself. While making reference to “distinguish[ing] between natural persons and corporations or other artificial entities created by law, including by prohibiting such entities from spending money to influence elections”–the resolution doesn’t deal with whether corporations have constitutional rights, rather than just statutory ones granted them by law. That task is taken care of by a companion joint resolution, The People’s Rights Amendment (SJ Res 18 and HJ Res 21). It’s anyone’s guess when this one will get on schedule for a vote (in either house of Congress).

But together, this pair of resolutions emulate the comprehensive one introduced at the behest of Move To Amend, a grassroots organization that leads the pack of amendment reform advocates—HJ Res 29 (though it hasn’t been given a catchy title).

So at this point — just before that Senate vote on Monday — it’s instructive to examine briefly why SJ Res 19 and 18 are inadequate to tackle what ails our democracy when compared with MTA’s HJ Res 29.

First, put your money where your mouth is. SJ Res 19 does not address transparency in the campaign contribution process. HJ Res 29 does: “Federal, State and local government shall require that any permissible contributions and expenditures be publicly disclosed”. Since there are always maneuvers around law limiting contributions, disclosing the sources of all funding is a critical sunlight principle.

Second, what’s in a name? The companion resolution, SJ Res 18, is a “people’s amendment” with dodgy language. Most critical is this mouthful: “The words people, person, or citizen as used in this Constitution do not include corporations, limited liability companies or other corporate entities established by the laws of any State, the United States, or any foreign state[…].”

The problem is with specific words here: corporation, limited liability company, and especially corporate entities. An encouraging stab at inclusiveness, but not enough. The first two name common legal entities for the conduct of business activities, while the third tries to cast the net wider and catch-all anything else of a “corporate” nature that may be enabled by law. But that term may be vulnerable—subject to legal and otherwise rhetorically inventive maneuvers to create funding entities that can technically escape being deemed “corporate.” I suspect that the language reads this way in order to permit labor unions to squeak through a loophole as exceptions to the resolution—since unions are arguably not corporations or even corporate entities (to the best of my imperfect knowledge).

But that’s an unwise safe-haven. Unions don’t need this exception, and a lot more nefarious shenanigans can slip through a loophole designed for them. MTA’s language nails it simply and elegantly: “Artificial entities, such as corporations, limited liability companies, and other entities, established by the laws of any State, the United States, or any foreign state shall have no rights under this Constitution[…].” Here the operative term is “artificial entities” (the corporate forms listed are merely examples of them). Human beings are natural persons because they spring from nature. Anything that humans create is an artificial device—a tool for dealing with the natural world or with how we can organize living in it as social beings meeting our needs. That includes not only hammers and nails and fracking technology, but more to the point here corporations, unions, and any sort of entity—be it humanely ideal or just a dodge—devised by the minds of people. No lawyerly Houdini moves can escape the net of this resolution. Simple and elegant.

Third and finally… You crazy? — The fail will probably kill ya! Butch Cassidy and the Sundance Kid jumped off the cliff and into the river together. That’s the way it should be with the major principles embodied in these resolutions: that money is not speech and must be controlled in politics, and that corporations are not entitled to the constitutional rights of people. Yoke them together in one amendment, not two. Again, you can suspect that their separation into the Democracy for All Amendment and The People’s Rights Amendment is disingenuously strategic: to condition your expectations to settle for less. One resolution will eventually pass (the invidious logic may go), and given the flush of a partial victory, and sufficient passage of time while waiting, waiting, waiting on the second… it may fade into memory and resignation. “Ah well, at least we got the one. The important one that deals with the most pressing problem.”

And which one do you think that is? SJ Res 19 of course. Which would establish the right to control campaign financing—but without transparency—and with the actual control having to follow in further legislation. Meanwhile, corporate and other artificial entities would still have the constitutional rights of people—which can enable a lot more political influence mischief both inside and outside of mere campaign funding. Failure to follow through on both principles will dilute the medicine and buy the disease time to mutate around it.

I regret that I’m not hopeful a People’s Amendment would build on momentum from the success of a Democracy for All Amendment, and bring us a one-two take-down later if not sooner. It’s more likely that the name of the game is Divide and Conquer. Divide your attention, then conquer and diminish your expectations of what’s really needed to cure our democratic process and what we can settled for in the end.

The only remedy? Keep your eyes on the prize. Think outside the box of the political babble of the moment—especially after September 8th’s place-holding Senate vote. This is an issue where it isn’t true that perfect is the enemy of the good. If you understand the nature of the problem facing our democracy, and really mean to solve it, you have to conclude: without perfectly addressing the problem, there is no “good enough” cure worth living with.