Last Friday, Occupy Democracy started in London’s Parliament Square. We’ll let the organizers explain in their own words what this is all about: 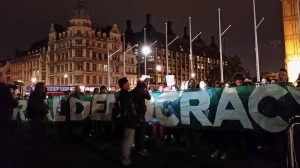 The imposition of austerity has no democratic mandate from the public. Nobody voted for the  privatisation of the NHS, or the Bedroom Tax, and the Liberal Democrats were quite prepared to renege on one of the key promises they made to their voters on tuition fees.

Our system of parliamentary democracy is unable to deal with the consequences of a social crisis it helped to create. We are facing record homelessness, while many more struggle to keep a roof over their heads, record numbers are relying on food banks to feed their families, and record numbers are facing fuel poverty as energy prices rise eight times faster than wages. Meanwhile inequality is reaching levels not seen since the nineteenth century.

Nobody voted for this.

It is becoming clear to millions in this country that our system of democracy increasingly functions in the interests of big business and a tiny wealthy elite.

That the imposition of austerity has no democratic mandate from the electors.

That nobody voted for privatisation of the NHS.

That the Liberal Democrats broke the promise on tuition fees they made to their voters when  they entered into the Coalition.

That the Coalition government’s conduct reveals a fundamental problem with Britain’s system  of parliamentary democracy.

That Parliament has failed to protect the interests of the majority, and especially of the most  vulnerable, in our society.

That government and Parliament function in the interest of big business.

To support the call of the Occupy movement for the occupation of Parliament Square on Friday 17th October in order to put forward a set of democratic demands for the fundamental reform of Britain’s system of democracy.

The occupation began with an overnight vigil marking the International Day for the Eradication of Poverty. It was also a direct challenge to the Police Reform and Social Responsibility Act 2011, which repealed the law that prohibited protests near Parliament Square, but instead outlawed items that could be used for sleeping in that area. 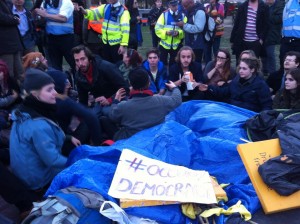 Friday night passed peacefully, but Saturday night had the police forcibly removing campers’ personal belongings and harassing the protesters. On Sunday night, hundreds of police converged on the square in an attempt to remove the protesters. The demonstrators were given 30 minutes to leave or face arrest. According to the Occupy Democracy Facebook page, the protesters will be occupying the square in shifts through the night. The occupation is scheduled to run until this coming Sunday. A schedule of events is listed here.

Occupy World Writes stands in solidarity with Occupy Democracy. All over the world, the people are saying enough is enough. United, we can change the world. Divided, we don’t stand a chance.