“We must be honest with each other and with ourselves,” Biden said. “Too much of what’s happening in our country today is not normal. Donald Trump and the MAGA Republicans represent extremism that threatens the very foundations of our republic.” END_OF_DOCUMENT_TOKEN_TO_BE_REPLACED

As Professors Stella Rouse and Shibley Telhami of the University of Maryland wrote at Politico, the school’s critical issues poll found that while a majority of Republican voters agree that such a declaration would be unconstitutional, most also believe that the U.S. should be officially known as Christian. END_OF_DOCUMENT_TOKEN_TO_BE_REPLACED 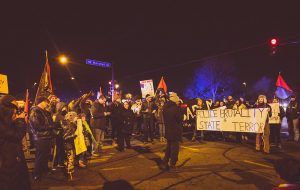 Reuters identified five law enforcement trainers who have been hired by police and sheriffs’ departments nationwide despite their support for right-wing militia groups, including the Oath Keepers, Proud Boys, and Three Percenters; the QAnon conspiracy, which baselessly claims that Democrats and Hollywood stars belong to a cabal of Satanist pedophiles and cannibals; and former President Donald Trump’s “Big Lie” that the 2020 election was stolen. END_OF_DOCUMENT_TOKEN_TO_BE_REPLACED

Posts by far-right news site Breitbart had been shared three times as often as posts from the official pages of every Democratic member of the US senate combined in the previous 30 days. Conservative firebrand Ben Shapiro had chalked up 56 million interactions, more than the main pages of ABC News, NBC News, The New York Times, The Washington Post and NPR put together. END_OF_DOCUMENT_TOKEN_TO_BE_REPLACED