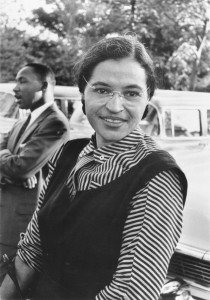 February is known as Black History Month. We hear politicians proclaim that we live in a “post racial society” in this country, and everything is as balanced as it can be. Caucasians take comfort in knowing anti-discrimination and equality laws have given them a blind excuse to pay no attention to the people who would say otherwise.

But they are wrong. Open discrimination, racial profiling, preferences in education and employment opportunities and staggering statistics prove we are at an all-time high in our actual racial misconceptions. Here’s a few statistics to prove the point:

This is just the tip of the iceberg. What is important is that while we celebrate our progress since the Civil Rights era, we need to pause and question what this current period of our history should be called in retrospect. When future generations ask if we did all we could, how can we say yes with the current status quo being what it is?

I have always thought of Rosa Parks, the Rev. Martin Luther King Jr., Thurgood Marshall and the Little Rock Nine as being heroes, among many, many others – worthy of respect and high esteem. We now add names like Trayvon Martin, Jordan Davis and George Stinney to this list. How long will the list become?

Occupy World Writes believes all Americans need to be more colorblind. We believe the future of Black History Month might include a whole bunch of white folks drinking some humble tea and seeing people as people, not as segments of the population based on skin color. We hope it comes sooner rather than later.