“I feel that he’s earned a second chance.” 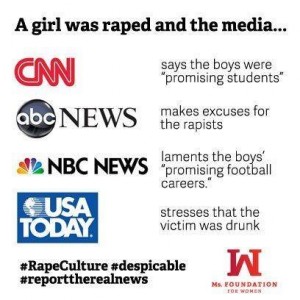 That’s what Steubenville High football coach Reno Saccoccia has to say about his decision to welcome convicted rapist Ma’lik Richmond back to his team.

The facts of the Steubenville rape case in 2012 were already horrendous. A teenage girl was repeatedly and publicly sexually assaulted by boys on her school’s football team. Pictures and video were taken and the victim was shamed on social media. Coach Reno Saccoccia allegedly tried to cover up the crime and continued to let the perpetrators play on the team even after it became clear that they had committed these acts.

This case was a clear-cut instance of rape culture, where  a community prioritized the success and protection of its football team, and dismissed incidences of rape under the guise of ‘boys will be boys.’

Now, Ma’lik Richmond – who was found guilty of raping a minor while she was unconscious – is out of jail and and Coach Saccoccia has put him right back on the Big Red football team. While he was never charged with attempting to cover up the crime it’s clear that Saccoccia still doesn’t understand the seriousness of his players’ crimes. In his words: “[Richmond’s] one of 55 players that are in good standing with their teammates and their coaches.”

This cannot be tolerated. We as a nation are tired of rapists almost entirely getting away with their heinous crimes. This case is unusual in that the perpetrator did spend some time – a very short time – in detention. But now the high school appears to be putting forward the message that that is enough to absolve him of what he has done. By allowing Richmond on the team, the leadership at Steubenville High School is saying football wins mean more than protecting and respecting female students.

Please join Occupy World Writes’ individual members and others by signing a petition on Change.org that asks administrators at Steubenville High School to permanently remove Ma’lik Richmond from the Big Red football team, and instate a policy that bars convicted rapists from playing on the high school’s sports teams.