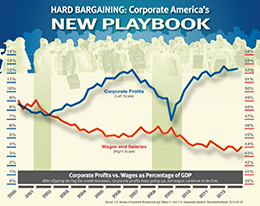 Even at unionized companies, IBEW negotiators are confronting cash-rich employers who have replaced mutually beneficial collective bargaining with a winner-take-all, adversarial relationship — an approach some union activists are calling “hard bargaining.” END_OF_DOCUMENT_TOKEN_TO_BE_REPLACED