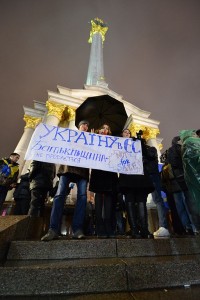 Protestors in Kiev in November. Photo by Ivan Bandura (Own work) [CC-BY-3.0 (http://creativecommons.org/licenses/by/3.0)], via Wikimedia Commons

Objecting to the government’s decision to back away from free trade and association agreements with the European Union in favor of economic interests with Russia, protestors on Monday, January 12, called for the resignation of the Interior Minister Vitaly Zakharchenko along with several top security officials, according to UPI news sources.

In November of 2013, several protestors were killed and many more were injured during a crackdown on demonstrations in Kiev. This past weekend’s actions were the first in a resurgence of demonstrations and rallies in the nation’s capitol since encampments were closed in December and smaller protests had resumed since that time.

Protesters blocked the entrance to the building housing the ministry, RIA Novosti said.

Law enforcement officials were criticized by members of the European Union for using force against demonstrators in November.