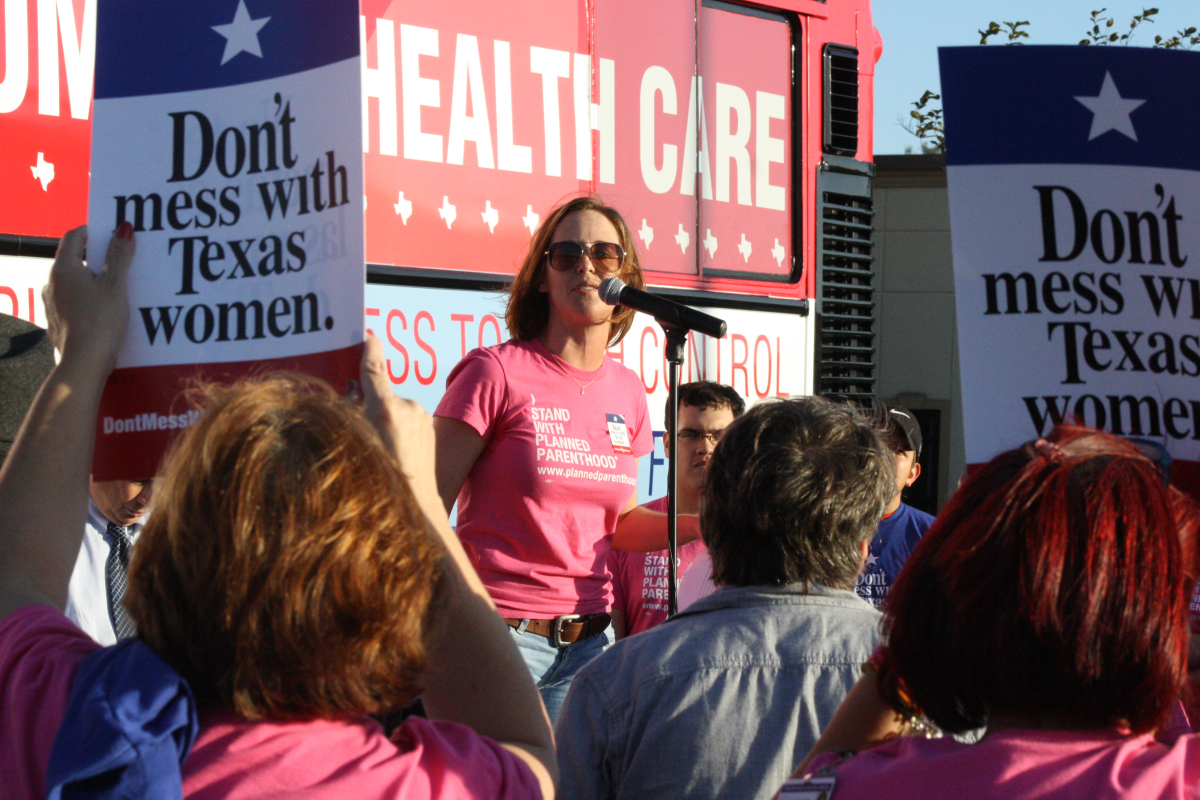 Illustrating the potential consequences if Republicans fulfill their threat to defund Planned Parenthood nationwide, a new study shows that when Texas slashed state funding for family planning clinics in 2011, the abortion rate among teenagers in the state actually increased.

The Texas state legislature launched a series of attacks on reproductive rights, beginning in 2011, when it cut funding for family planning services by 67 percent and restructured the way it allocates the remaining funds. These measures closed more than 80 clinics, including 11 Planned Parenthood clinics. One of the purported goals, said Republican backers, was to decrease abortion rates. As then-governor Rick Perry said: “We will continue to pass laws to ensure abortions are as rare as possible under existing law.”

However, according to the new study, the state’s funding cuts had the opposite effect—with the state’s teen abortion rate rising by an average of more than three percent over three years in the wake of slashed funds and shuttered clinics.

The study, which will be published in the Journal of Health Economics, was conducted by economics professor Analisa Packham, now based at Miami University. In addition to the increased abortion rates, Packham also found that the state’s teen birth rate grew by approximately 3.4 percent in the four years after the cuts, concentrated in counties with high poverty rates.

Packham’s findings are especially troubling when compared with national numbers. The Centers for Disease Control has documented decreasing rates of teen pregnancies on a national level, and the national abortion rate is at its lowest level since the Roe v Wade decision in 1973.

“This certainly isn’t the way to have fewer abortions,” Dr. Diane Horvath-Cosper, an OB-GYN and advocate with Physicians for Reproductive Health, but not involved with the study, told the Huffington Post. “The abortion rates nationally have decreased and are at a historic low. So for Texans to see an increase in adolescent abortions is really telling―it seemed to have followed the national trend until these clinics were defunded.”

Family planning clinics such as Planned Parenthood provide free or affordable services that typically include contraception, testing for sexually transmitted diseases, and counseling services. However, the organization has been under attack from conservatives seeking to curtail women’s abortion rights and access to reproductive care.  Eliminating Planned Parenthood in Texas, as Packham notes in study, was a main goal of state lawmakers who passed funding cuts:

One reason behind defunding Planned Parenthood is that although centers that receive public funding are not legally allowed to provide abortion services, publicly funded Planned Parenthood clinics are affiliated with abortion providers. State rules define abortion clinic “affiliation” as any clinic that shares an organizational name with an entity that performs abortions elsewhere. Proponents of policies to defund Planned Parenthood argue that public money can be distributed across clinics in the same organization and can indirectly fund abortions, despite the fact that shifting funds is illegal and all family planning services at publicly funded clinics are billed separately. Nevertheless, based on their affiliation with abortion clinics, Texas Planned Parenthood centers that provide only contraception services, STD screening and other women’s health services were a primary target for 2011 funding cuts.

As a presidential candidate, last year Donald Trump vowed to defund Planned Parenthood at the national level, adding to a long series of statements and failed attempts by GOP lawmakers—including Vice President Mike Pence, who is said to have started the Republican war against Planned Parenthood when, as a congressman, he sponsored the first bill to defund the organization in 2007. The Senate’s current health care bill specifically targets Planned Parenthood and would prevent the group from receiving Medicaid funding for at least one year. Planned Parenthood—which operates more than 600 clinics nationwide and serves an extimated 2.4 million people each year—receives about $550 million annually in federal funding.

In addition to the risk that the nation could see increases in teen pregnancies and abortions if Planned Parenthood loses its federal funding, low-income women would be disproportionately affected. As Alana Romain wrote for Romper:

Perhaps one of the most frustrating aspects of the debate about Planned Parenthood though is the fact that the organization provides much-needed health care services, but that is often overshadowed by the fact that it also happens to offer abortion services. The reality though is that the bulk of the care Planned Parenthood clinics provide actually includes important reproductive health care services that have nothing to do with abortion at all (think prenatal care, cancer screenings, STD tests, and access to contraception). What’s more is that millions of Americans—especially those who are low-income or who have other barriers to health care access—rely on those services, and if the clinics are defunded, they will be at risk of being left without a provider.

That’s especially concerning given that the implication that public funds somehow already currently fund abortions at Planned Parenthood clinics (or any other clinic, for that matter) is flat-out wrong: according to Quartz, health clinics have never been able to use federal funds for abortions since Title X was first enacted in 1976. And given the fact that Planned Parenthood is a major health care provider for many low-income Americans—Medicaid patients make up more than half of Planned Parenthood’s client load, according to The Washington Post—it seems that the only thing the bill will actually accomplish will be making it harder for already-marginalized individuals to get the necessary (and sometimes life-saving) health care they need.

Planned Parenthood estimates that each year its clinics provide: