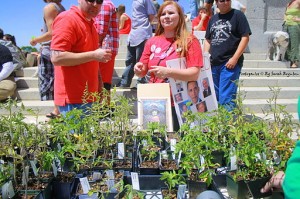 On November 6, 2012, Proposition 37 was rejected by California voters. The ballot measure would have required labeling of genetically engineered food (with some exceptions), and would have disallowed the labeling of genetically engineered food with the word “natural”. In response to that outcome, Tami Monroe Canal founded March Against Monsanto, believing that it was in her daughters’ best long term interests.

Monsanto is the world’s largest producer of genetically engineered seed, as well as being the manufacturer of herbicides such as Roundup. The herbicides have been proven to cause health risks such as birth defects, cancer, organ damage and auto-immune conditions. The genetically engineered seed has been the centerpoint of numerous patent lawsuits here in the U.S., with the prime example being Bowman v Monsanto Corporation. In the Bowman case, the U.S. Supreme Court ruled that Bowman, a farmer who had bought seed from a grain elevator, was guilty of patent infringement as the elevator had some Monsanto seed in it, and that he specifically bought from the elevator to skirt Monsanto’s  contract saying that a farmer cannot save seeds from previous crops and must buy new seed each year from Monsanto. 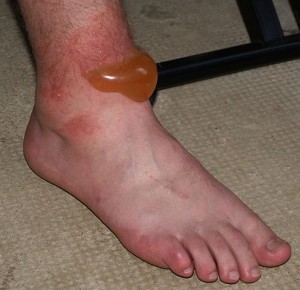 Blister caused by Roundup exposure. By Tael (own work) via Wikimedia Commons.

Monsanto was also one of the two companies producing Agent Orange for the U.S. government; the other being Dow Chemical. The horrors of Agent Orange exposure are too lengthy to go into here; it’s been linked to numerous diseases, cancers and mutations, as well as being an ecological disaster for the countries it was used in.

The first March Against Monsanto was held on May 23, 2013 in over 350 cities, mostly in the U.S. The second was held on October 12. Yesterday, May 24, the third March Against Monsanto took place, with events happening in more than 50 countries and 400 cities around the globe. It’s hard to say how many people took part in yesterday’s events; last year over 2 million people marched in the protests, 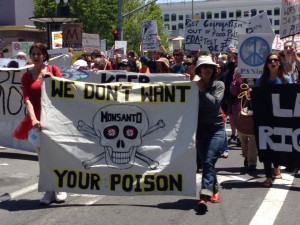 March Against Monsanto May 2014, San Francisco. Photo by Occupy Monsanto via Facebook

Occupy World Writes stands in solidarity with yesterday’s marchers. We’ve seen how Monsanto, slowly but surely, is positioning itself to become the only player in town when it comes to providing seed for the crops we eat. We’ve seen the devastation their herbicides, pesticides and defoliants create. And, crop diseases and pests who eat the crops are mutating to become herbicide and pesticide resistant.

The time to stop Monsanto’s madness is now.