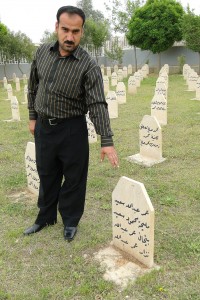 Bakhtiar Awmar points to grave where his father, mother and sister are buried – victims of the 1988 Chemical Attack – Halabja, Kurdistan – Iraq. Photo By Adam Jones, Ph.D. (Own work) [CC-BY-SA-3.0], via Wikimedia Commons

When it comes to adversity and turmoil, there is a people who have suffered for generations – decades of atrocities, genocides, persecutions, imprisonment, death – yet they remain the most hopeful, peaceful, resillient and patient people the planet may have ever seen.

“Things are getting better.  In the nineties they killed us.  Now they just lock us in prison,” says the conscientious objector known as Black Crow.  “The more they kill us, the stronger we become.”  KurdistanTribune.com

But before we talk more about the Kurds, let us pause a moment and consider the nation of Israel. Since World War II, the world has rejected the philosophy of ethnic genocide. When the Liberators arrived in Germany, they as well as the citizens living in nearby communities, were appalled to learn of the horrors and atrocities that had been carried out upon a race simply for the blood that flowed through their veins.

Since that time, we as an international community, have built museums, continue to hold conferences and forums, and attempt in our feeble understanding of humanity to grasp what happened during this time. We decry governments who fail to stop these types of crimes against humanity from continuing.

And we rally together as an international community to send aid or observers during times of crisis throughout the world. Most recently, these locations have included Syria, parts of Turkey, Iraq and Iran. What do all these countries have in common when it comes to atrocities and genocides? The main underlying theme is a continuous, insidious, deliberate and concealed attempt to wipe the earth of a majestic and beautiful people; the Kurds.

In a recent article published in Middle East Forum, author Ofra Bengio discusses the “Surprising Ties between Israel and the Kurds” and explores what the world has resisted learning. Part of learning is recognition of truth; the United States has a clear track record of creating instability throughout the Middle East in their ulterior motive of controlling the world’s oil supply while claiming peace and democracy to be their objectives.

Israel gained her independence in 1948, a mere six months after the United Nations General Assembly recommended the designation, and just eight hours before the expiration of the treaty which allowed the possibility to occur. So one must ask this question: If the state of Israel could be established following the holocaust and atrocities that were waged against the Jewish people, should not the Kurds also be given back the land taken from them and independence given to Kurdistan as well?

Occupy World Writes believes the Kurds deserve the same human rights afforded all peoples in the countries in which they reside or have taken refuge in. We support Kurdistan’s President Barzani’s call for an independent Kurdistan. We call on all governments that can affect change to sit down and discuss how a peaceful path forward can be achieved, as this is what the function of government is intended to do. Double speak and broken promises are nothing to sustain a people with.

WE ARE ALL KURDS.

Ofra Bengio is a senior research fellow at the Moshe Dayan Center for Middle Eastern and African Studies at Tel Aviv University. She is author of The Kurds of Iraq: Building a State within a State (Lynne Rienner Publishers, 2012) and editor of The Kurds: Nation-Building in a Fragmented Homeland (Texas University Press, 2014).