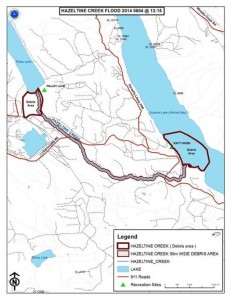 On Monday, August 4, a failed dam in a tailings pond of the Mount Polley copper and gold mine near Lively, British Columbia released what had originally been reported to be five million cubic meters (1.3 billion gallons, or the equivalent of 2000 Olympic-sized swimming pools) of mining waste into nearby rivers and creeks.

However, the actual size of the spill was much larger; 10 billion liters (over 2.5 billion gallons) of wastewater and 4.5 million cubic meters of fine sand with a heavy metals concentration; in total, the equivalent of 5,800 Olympic-sized swimming pools. The flow of the mining waste, which can contain such things as arsenic, mercury, and sulfur, uprooted trees on its way to the creek. It also forced a water ban for about 300 people who live in the region.

This isn’t the first time that there’s been environmental issues with the Mount Polley mine. Larry Chambers, a former mine employee,, told the Vancouver Sun that had been dismissed last year for raising safety and environmental concerns. Furthermore, the province had notified Imperial Metals (the mine’s operator) of various environmental concerns over the last two years.

The water-use ban was partially lifted yesterday for people living along a section of the Queznel River going north toward the Fraser River. It remained in place for the river south of there, as well as Queznel Lake, Polley Lake, Hazeltine Creek and Cariboo Creek.

B.C. Environment Minister Mary Polak said; “For the second straight day, we have received water quality sample results that meet British Columbia or Health Canada drinking water guidelines.” However, she warned that these were surface samples, as it was still unsafe to get access for testing at different depths and locations, and went on to say: “We’re absolutely committed to getting full and accurate results as soon as we possibly can.”

Energy and Mines Minister Bill Bennett said that there is a chance the spill may not be toxic, because the copper and gold mine is not generating acid. This means that caustic chemicals are not leached out of the rocks and into the water. However, on Thursday the Shuswap Nation Tribal Council stopped all fishing along the Fraser River citing sickly salmon with skin peeling off being the reason for the shutdown.

There’s also a home state angle to this all. On Wednesday, Mining Truth, a Minnesota based group, said that Knight Piesold, the company who designed and built the Mount Polley mine, also provided the DNR and PolyMet with input on the current proposal for the proposed PolyMet copper mine – a hot button environmental topic in northern Minnesota.

Paul Danicic, executive director of the Friends of the Boundary Waters Wilderness, said; “Minnesotans are being asked to put a lot of faith in these companies that their projects won’t endanger the mine’s workers or the surrounding environment. It’s deeply disturbing that the same firm that designed the collapsed tailings dam was hired by PolyMet and the Minnesota DNR. We’re being asked to trust these companies with Minnesota’s water.” We couldn’t agree more.

People and the planet over profits!