We’ve written about fracking numerous times; it’s one of our favorite subjects. The fracking boom here in the U.S. has had some positive aspects; the cost of electricity has dropped in many places due to cheaper natural gas prices and carbon dioxide emissions from power plants has dropped as more and more coal fired plants are replaced with ones that burn natural gas instead, to name just a couple. But, all these things come at a price.

We’ve talked about the link between fracking and earthquakes before; today we’ll talk about water. By now you’ve probably seen the videos of tap water catching fire, or the ones of tap water being a color that doesn’t commonly occur in nature. For the most part though, both the oil companies and the state governments have claimed that fracking isn’t contaminating our wells. This is beginning to change, though. 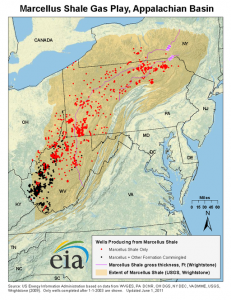 On August 28, the Pennsylvania Department of Environmental Protection (DEP) released details on 243 cases of water contamination caused by fracking and related activities by the natural gas industry. The cases span a timeframe from 2008 to 2014, and include methane gas contamination, spills of wastewater and other pollutants, and wells that went dry or were otherwise undrinkable. There were also cases where a single drilling operation impacted multiple water wells. State officials did not indicate how many more cases of contamination there are that might have occurred since 2008 but were not included in this list.

The release of the information came about after years of various media outlets filing lawsuits and Freedom of Information Act requests from the DEP on water problems related to fracking and other oil and gas operations. It also comes a month after a report by the state’s Inspector General which stated that the rapid expansion of the gas industry in Pennsylvania “caught the Department of Environmental Protection (DEP) unprepared to effectively administer laws and regulations to protect drinking water and unable to efficiently respond to citizen complaints.”

Auditor General Eugene DePasquale stated; “It is almost like firefighters trying to put out a five-alarm fire with a 20-foot garden hose. There is no question that DEP needs help and soon to protect clean water.” But wait! There’s more…

On August 31, the Pittsburgh Post-Gazette reported that the oil and gas companies had grossly under-reported the amount of drilling cuttings and fracking fluid sent to Pittsburgh-area landfills. EQT Corp. told the DEP that it sent 21 tons of drill cuttings from its Marcellus Shale wells to area landfills in 2013. However, the landfills themselves reported receiving nearly 95,000 tons of drill cuttings and fracking fluid from EQT over the same time period- over 4500 times the amount reported.

What we’re seeing with both fracking and tar sands mining are the dire consequences stemming from our unquenchable thirst for energy. Alternatives such as solar and wind power are becoming more and more competitive as far as cost goes, yet because so many of our elected officials are bought and paid for by the fossil fuel lobbies, renewable energy doesn’t get the budget and support from the government that it needs to be truly successful. We just hope that this situation changes before it’s too late.