She had used the same “stand your ground” defense that George Zimmerman had used in his trial for the killing of Trayvon Martin, and the same prosecuting attorney was involved; State Attorney Angela Corey. However, unlike Zimmerman, who was found not guilty after killing Martin, Marissa was found guilty and sentenced to three concurrent twenty year sentences (in 13 minutes, none the less) for firing a gun into a ceiling under Florida’s mandatory minimum guidelines. The other differences? Zimmerman is white and a male, while Marissa is black and a woman. 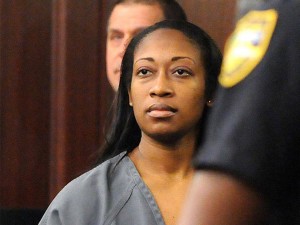 She had served for two years at the time of the Zimmerman trial, and the national focus on stand your ground laws brought her case to the attention of the media. After the large public outcry over the case, an appeals court judge threw out the conviction, finding that the previous ruling wrongly placed the burden on Alexander to prove that she was abused by her husband, and called for a retrial which was to begin this coming Monday.

On Monday, Marissa accepted a plea deal which will more than likely get her released when she goes for sentencing in January; three years with credit for time served. Why is it just more than likely instead of certain? Because one of the counts against her was resolved with an “open” plea, meaning her lawyers and the prosecutors couldn’t come to an agreement on a sentence. She faces a possible five years on that charge. And, if she is released in January, she’ll have two years probation, with at least part of that time spent basically under house arrest, being able to leave only for work, church and the doctor. 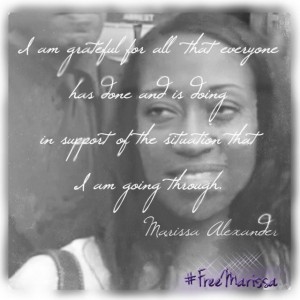 Most observers think she’ll be released, though. Mark Rubin, legal analyst for WOKV in jacksonville, states “So it’s a win for everybody. The prosecution gets a conviction in a highly publicized case, and Marissa Alexander gets to go home and be free in a couple months.”

We at Occupy World Writes aren’t completely happy with the agreement; we feel that she should be released now with no probation. However, we can understand why Marissa chose to take the plea bargain and get on with her life. We wish her well.