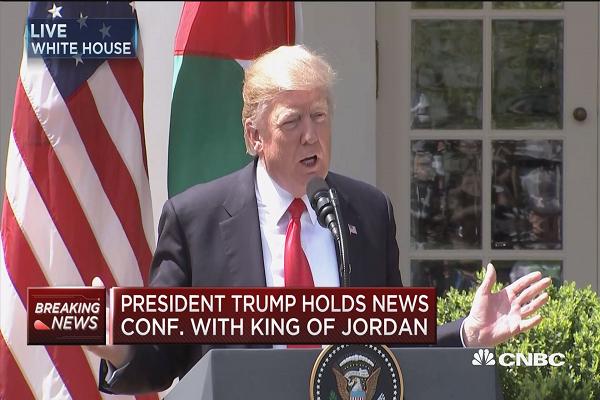 Just hours after the U.S. ambassador to the United Nations appeared to threaten unilateral action against Syria, Trump said he considers the alleged use of chemical weapons on Tuesday “beyond a red line” that “would not be tolerated” but refused to offer any clarity on what actions his administration would take in response.

.@jpaceDC asks President Trump if chemical attack in #Syria crosses a red line for him. @POTUS answers: “It crossed a lot of lines for me.” pic.twitter.com/1SOXuU2ENI

Though he cited no evidence, Trump put the blame for Tuesday’s chemical attack squarely at the feet of Syrian President Bashar Al-Assad and said his previous attitude toward the Syrian government—presented essentially as a hands-off approach—has “changed very much” in the last 24 hours.

“I will tell you, that attack on children yesterday had a big impact on me,” Trump said. “Big impact.”

In response to Trump’s afternoon remarks, Phyllis Bennis, director of the New Internationalism Project at the Institute for Policy Studies, told Common Dreams the president showed a “total lack of any strategic coherence in his foreign policy.”

Trump is repeating a familiar mistake, said Bennis, by publicly blaming “the Syrian regime for the horrific chemical attack in Idlib without any certainty of who is actually responsible – something common to virtually all recent presidents.” Notably, she added, it was Trump who “urged President Obama not to attack Syria after the chemical bombing of 2013, tweeting in all caps “DO NOT ATTACK SYRIA — IF YOU DO MANY VERY BAD THINGS WILL HAPPEN.”

Now, said Bennis, it’s clear that Trump is considering a military response himself, even as the investigatory process has only just begun. As Bennis notes, the deadly attack in 2013 “was also by carried out by uncertain perpetrators, and again saw the U.S. government blaming the Syrian regime despite the lack of clear proof.”

Once again, the finger-pointing in the wake of a vicious massacre will have serious regional and global implications.

During a tense meeting of the UN Security Council earlier in the day, members demanded a thorough and credible investigation into what happened on Tuesday. While the U.S. and its western allies pointed the finger at Assad for the attack, Russia’s ambassador insisted that blame should not be assigned until an official probe, including expert and impartial analysis of the area where the massacre took place, could be conducted. Unfortunately, said Russia’s deputy UN envoy Vladimir Safronkov, the U.S. and its European allies have “a well-defined ideological slant” when it comes to chemical weapons and questioned the direction the council was headed.

Safronkov told the council that former U.S. President Barack Obama’s 2012 threat of military action if a “red line” was crossed and chemical weapons were used in Syria had provoked such attacks.

“That decision served as a starting point for future provocations by terrorists and extremist structures with the use of chemical weapons, they sought to discredit the official Damascus regime and to create a pretext for the use of military force against a sovereign state,” Safronkov said.

The Russian and Syrian governments contest the narrative emerging in the western media and said the source of the deadly chemicals was an ammunition depot operated by rebel forces that was targeted and struck by Syrian government airstrikes.

At a separate meeting focused on Syria in Brussels on Wednesday, Russian Deputy Foreign Minister Gennady Gatilov reiterated the importance of an impartial investigation into the deadly incident. “The task is to send a up-to-the-point investigative mission there if there’s a genuine desire to establish truth,” he said. “This mission should have balanced staffing and should produce unbiased assessments.”

In the U.S. Congress, military hawks indicated they saw Tuesday’s horrific scenes of children dying as a new opportunity to push for escalated U.S. military action in Syria and the toppling of Assad. “This is the biggest test yet of the Trump presidency,” Sen. Lindsey Graham (R-S.C.) said in a statement. “The president has an opportunity to punish Assad in a way that President Obama never would. This is the moment for President Trump to prove to everyone that when it comes to foreign policy and standing up to dictators, he is not President Obama. I don’t believe this President will make the same mistakes of his predecessor when it comes to Assad.”

Though unsurprising coming from Sen. Graham, those comments run counter to the military and foreign policy experts who applauded Obama’s ultimate decision not to make matters worse in Syria by deepening U.S. military involvement in 2012-13.

Meanwhile, when Trump was asked during his afternoon press conference to clarify what actions his administration might take against Syria, Trump simply reiterated that his “know-nothing” military strategy—which essentially revolves around surprise attacks and being “smarter than the generals“—will somehow “fix” the terrible “big mess” he inherited from his predecessors.

“I’m not saying I’m doing anything one way or another, but I’m certainly not going to be telling you,” Trump told reporters on Wednesday.

And, yes, that also means… you.