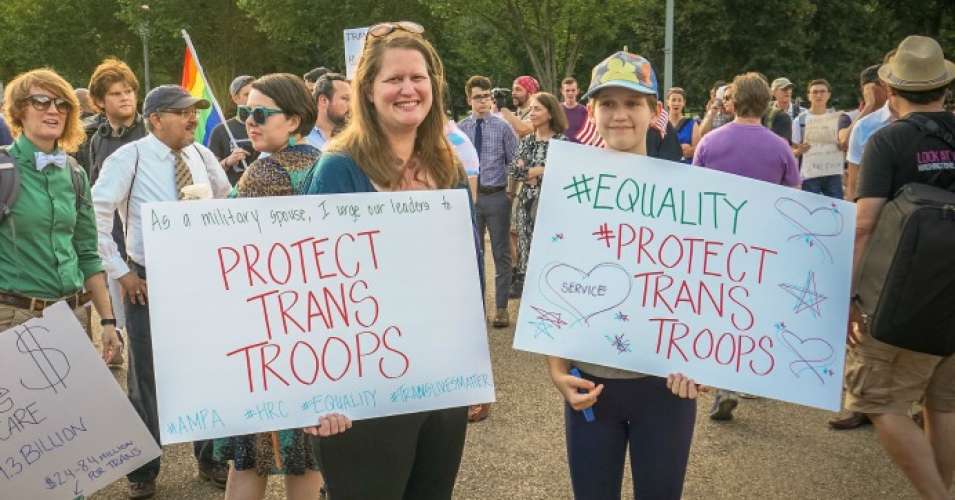 In a development hailed as a “HUGE step forward,” a federal judge on Monday blocked the Trump administration from enforcing its ban on transgender individuals serving in the U.S. armed forces.

The ruling by U.S. District Judge Colleen Kollar-Kotelly is in response to a legal challenge—Doe v. Trump—brought forth by the National Center for Lesbian Rights (NCLR) and GLBTQ Advocates and Defenders (GLAD) challenging the president’s directive.

Kollar-Kotelly said in her ruling that the plaintiffs’ claims “are highly suggestive of a constitutional violation,” as the presidential directive “punish[es] individuals for failing to adhere to gender stereotypes.” In addition, the ruling stated, “a number of factors—including the sheer breadth of the exclusion ordered by the directives, the unusual circumstances surrounding the president’s announcement of them [on Twitter], the fact that the reasons given for them do not appear to be supported by any facts, and the recent rejection of those reasons by the military itself” are evidence for blocking the ban.

The National Center for Transgender Equality (NCTE), which filed an amicus brief in the case, called the ruling “yet another setback for the discrimination administraion.”

“Again and again,” said NCTE executive director Mara Keisling, “our courts have been forced to step in and halt this administration’s unconstitutional and dangerous bigotry. As today’s ruling makes clear, this ban was never about military readiness—just like President Trump’s Muslim bans have never been about national security. This ban is about discrimination, plain and simple. We are grateful that the plaintiffs and thousands of other troops will be able to continue serving without the threat of discharge while this case proceeds.”

The ACLU also filed suit to challenge the directive, with oral arguments in that case set for next month.

Responding to Monday’s ruling, Joshua Block, senior staff attorney with the ACLU’s LGBT and HIV Project, said, “This is the first decision striking down President Trump’s ban, but it won’t be the last.”

“The federal courts are recognizing what everyone already knows to be true: President Trump’s impulsive decision to ban on transgender people from serving in the military service was blatantly unconstitutional,” he continued. “As all of these cases move forward, we will continue to work to ensure that transgender service members are treated with the equal treatment they deserve.”