What happens when a sitting president kicks the legs of Democracy’s stool? 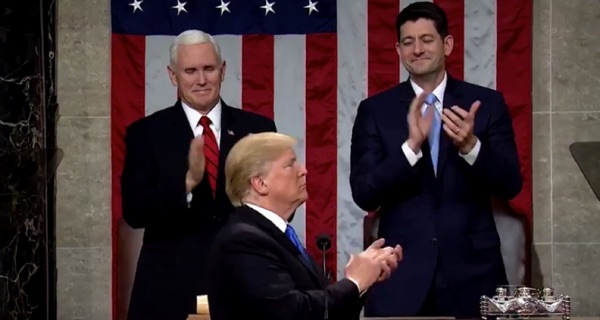 President Donald Trump delivered his 2018 State of the Union address on January 20, 2018. Since that time, the consequences and ramifications put forth in that speech are still being discussed after having set new precedents to the tone, nature and policies spelled out to the American people.

Congress has always held the tradition that when the sitting president delivers these speeches, the opposing party withholds applause and ovations for most the speech, and only the most basic and inarguable points receive unanimous approval. Like all traditions in Washington since Trump’s inauguration, this too has now changed.

Agreeing with a critic who called the actions of the democrats “treasonous” and “un-American” for not applauding policies they disagree with, Trump has taken a step into an entirely new territory that should have caused alarm bells to go for all.

“You’re up there, you’ve got half the room going totally crazy, wild—they loved everything, they want to do something great for our country. And you have the other side, even on positive news—really positive news, like that—they were like death and un-American. Un-American,” the president said. “Somebody said, ‘treasonous.’ I mean, yeah, I guess, why not? Can we call that treason? Why not? I mean, they certainly didn’t seem to love our country very much.”

The White House quickly defended Trump’s words, saying it was meant as a joke. When the President of the United States makes a JOKE of calling for the DEATHS of the opposing party’s members of Congress, we have entered a perception and introduction to authoritarian rule and dictatorship. Opposing the president is not punishable by death in the US, and to suggest otherwise demonstrates total ignorance or self-absorption. In fact, the 1st Amendment to the Constitution provides for the right of every American to not only disagree with the government or even the President, but to also assemble together to make their grievances known. Most people know this concept as “protest” or “dissent.”

In service to our country, we have put together a short refresher course about the history of Treason charges in the US since World War II. Let’s begin with what the law states as the punishment for Treason.

One person convicted of treason was Tomoya Kawakita, a Japanese-American sentenced to death in 1952 for tormenting American prisoners of war during World War II. Even such a clear-cut case created qualms; Kawakita was commuted to a life sentence and was eventually deported to Japan and barred from ever entering the United States again.

On June 19, 1953, Julius and Ethel Rosenberg were executed after being convicted of committing espionage for the Soviet Union. They were accused of transmitting nuclear weapon designs to the Soviet Union; at that time the United States was the only country with nuclear weapons. They were also accused of providing top-secret information about radar, sonar, and jet propulsion engines to the USSR. Espionage is considered a treasonable act.

Treason is a serious, non-jokable charge with very unfunny consequences. But don’t overlook this as just another benign statement from an overly-vociferous president. What he is actually demanding here is a One Party System that does not allow dissent or protest, that prevents a press from publishing negative articles and results in job losses of federal employees who oppose his authority.

His latest claim is that if he does not get his way on immigration, he will shut down the government. This holds the American people hostage and in economic jeopardy and is questionably illegal.

The irony in all of this is that for all intents and purposes, this president has walked up to the line of committing Treason himself, and is so close in reality that only legal experts can parse out if or why he has not actually committed that crime. In psychology, this is called “Projectionalism;” to accuse others of what you are carry inside yourself.

Since taking office, Trump has assembled quite a laundry list of things he has done for the benefit of the Russian government.

* Shortly after his inauguration, Russian officials were invited to an Oval Office meeting, in which Trump revealed to Foreign Minister Lavrov secrets that compromised the coordination of intelligence gathering with Israeli operatives, jeopardizing Israeli and the U.S. ability to track down terrorists and proliferates.
* Following the events in the Ukraine in 2014 and Russian interference in the 2016 elections, Congress imposed sanctions against Russia and individual operatives of the Russian government. Since taking office, Trump has refused to take actions to impose these sanctions, despite the fact the law requires him to do so.
* The recent meeting in the United States dealing with cybersecurity and counterterrorism between CIA Director Mike Pompeo and the heads of Russia’s intelligence agencies, one of which is included in the above mentioned sanctions and not allowed travel to the US.
* The Gasleys, a tanker carrying Russian LPG, docked in Boston and unloaded its cargo recently. Russia’s gas and oil industry is currently under sanctions, or is supposed to be at any rate.
* The Nunes memo and the Republican efforts to discredit the FBI and other intelligence services as a way to slow or stop Robert Mueller’s investigation has weakened the trust between Congress and the intelligence community, and has shown sources that their identities may not be protected.
* On April 7, 2017, the Trump administration launched a cruise missile strike against Shayrat airbase in Syria. The US launched 58 cruise missiles at the base, yet the base was operational within two days of the attack. Why? Because Trump had warned the Russians about the attack, so most of the planes, etc. had been moved before the missiles were even launched.

Moreover, words in the State of the Union address called for extending presidential powers and other non-restrictive measures which, in effect, abolish the Rule of Law for the President and his Administration’s activities.

America is now teetering on the balance between being ruled, not governed; in complete spineless fear, the GOP clenches their power at the cost of democracy and nation, shredding the ideals of the Constitution as fast as this administration has shed regulations protecting the American people, environment, public lands and diverse society.

At the fulcrum, we wait for something – anything – to prevent further decay of the country once known as a shining example of democracy.